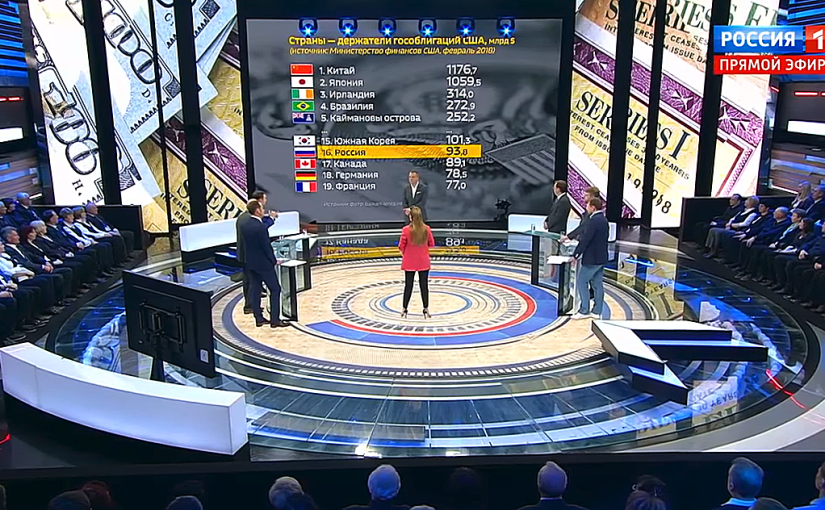 In a move labeled “unprecedented” by experts, during the run up to the Trump-Putin Helsinki summit, the Russian government has sold off the vast majority of its holdings of U.S. Treasury securities. Henceforth, Russia is no longer considered a “major foreign holder” of U.S. government securities. 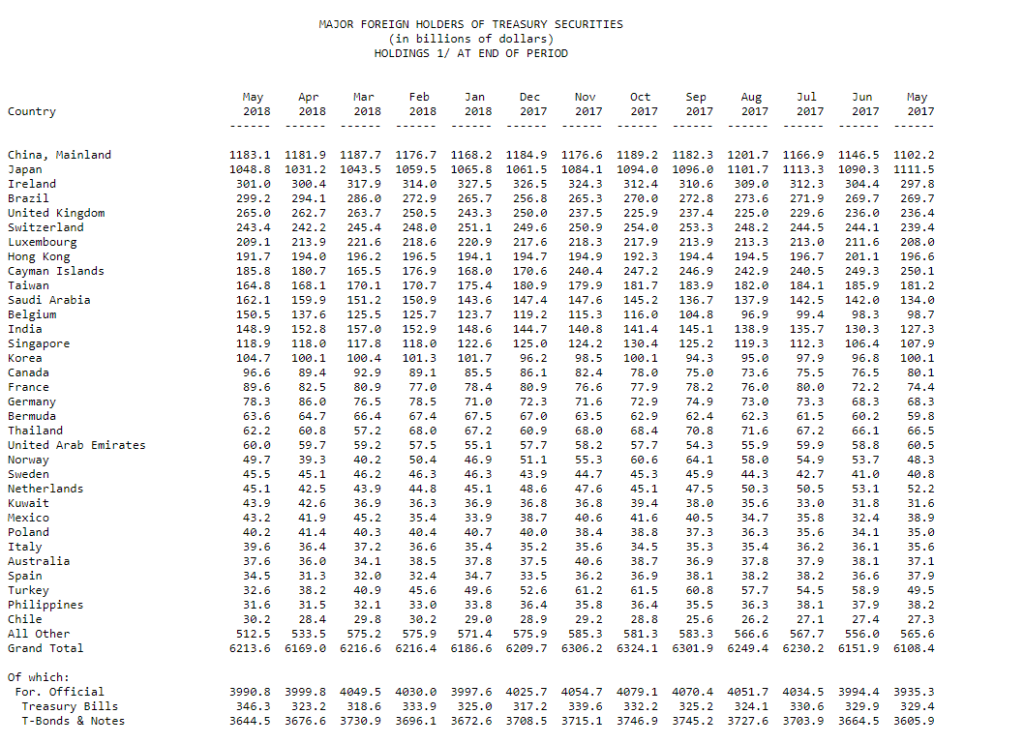 It’s unclear whether Presidents Trump and Putin discussed this aggressive reduction during their tête-à-tête meeting. Neither the glimpse of Putin’s notes, nor the post-summit comments reveal any mention of this topic.

Russia’s move seemed to go unnoticed by the group of U.S. lawmakers that celebrated the 4th of July in Russia. They watched the ballet “Sleeping Beauty,” toured St. Petersburg and appeared on Russian state television, refusing to call Russia the adversary of the United States.

Appearing on #Russia's state TV, @SenJohnThune echoes @SenShelby, claims that Russia is our competitor, not our adversary. The host asks whether they rehearsed that statement together, plays Shelby's clip for comparison. The host clarifies: US-Russia relations ARE adversarial.©️ pic.twitter.com/5dp1jBXT5q

Meanwhile, between March and May of 2018, Russian holdings of Treasury securities declined by 84 percent, plummeting from $96.1 billion to the mere $14.9 billion, according to the U.S. Treasury Department report. 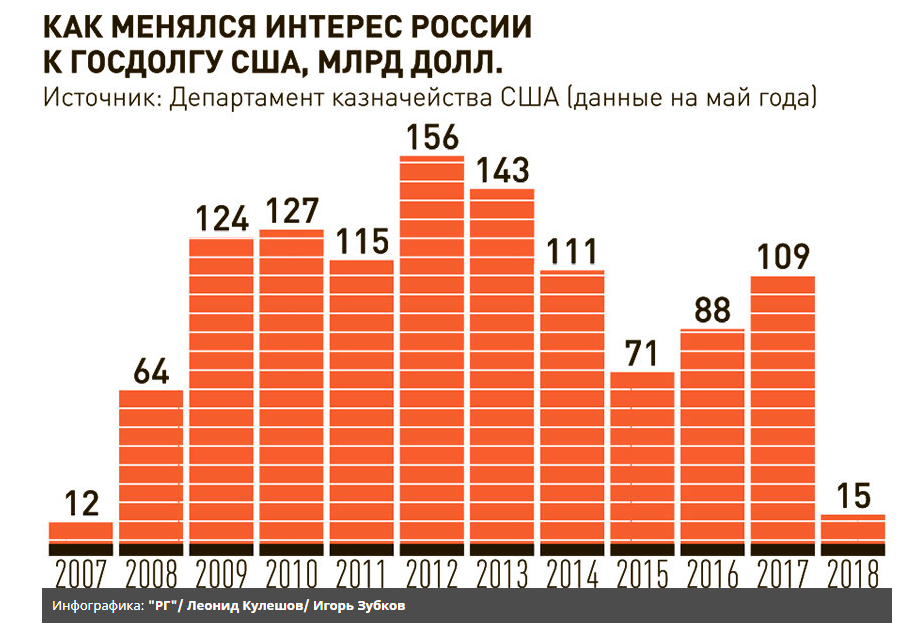 Bloomberg notes: “Such an aggressive reduction is not normal. To put the $81.2 billion decline into context, the most Japan has ever cut back in a two-month stretch is $47.8 billion. China, the largest foreign owner of Treasuries, has scaled back to a similar extent on occasion, but it was a mere fraction of its total. For Russia, once a top-10 holder, this looks like a full-scale liquidation. Since the start of 2017, no country’s holdings have fallen more, either on an absolute or percentage basis.” 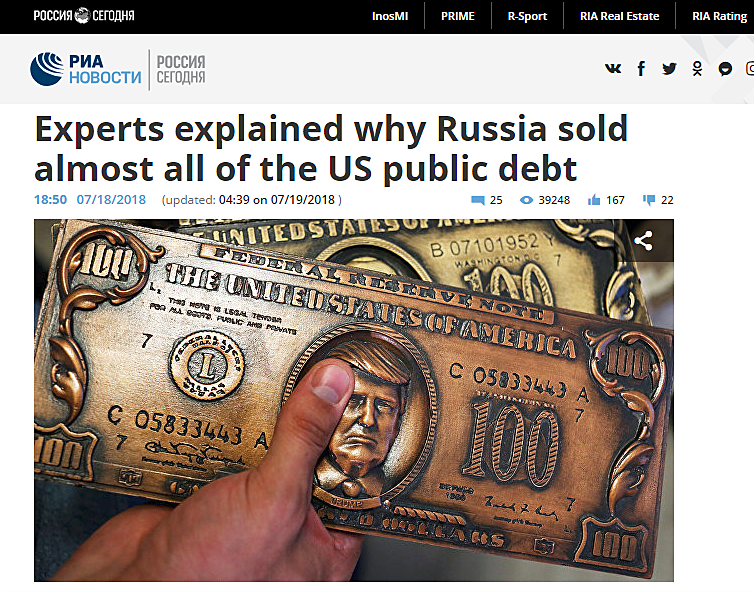 Russia was reacting to U.S. sanctions, including those that have already been imposed and the punitive measures that might be taken in the future, in a possible preemptive move to divest assets before they could be seized. This suggests that Russia might be contemplating further aggressive moves that would warrant the imposition of additional sanctions.

President of Russia Vladimir Putin stated that Russia sold most of its U.S. Treasury debt holdings “to minimize the risks” posed by the U.S. sanctions. Putin claimed that the sanctions “undermine confidence in the dollar as a reserve currency.” 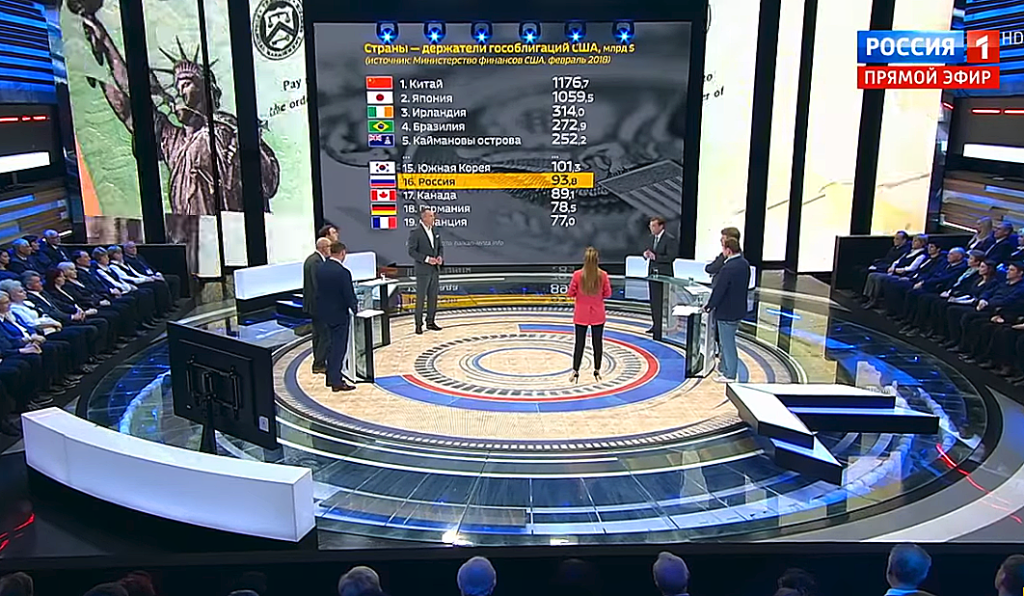 Vladimir Miklashevsky, a senior economist at Danske Bank, commented: “It’s all about the sharp increase in geopolitical tensions and the tightening of U.S. sanctions against Russia. For such a massive sale, we see pure geopolitics: reduction of risks, against the backdrop of the continued tightening of anti-Russian sanctions, in order to avoid a possible development of events under the Libyan or Iranian scenario.” A similar precedent involves the U.S. authorities blocking billions of dollars in assets of the Iranian Central Bank.

Brian O’Toole, former senior adviser to the Office of Foreign Assets Control (OFAC), confirmed: “Possession of U.S. securities subjects their holders to the risk of blocking due to sanctions.” 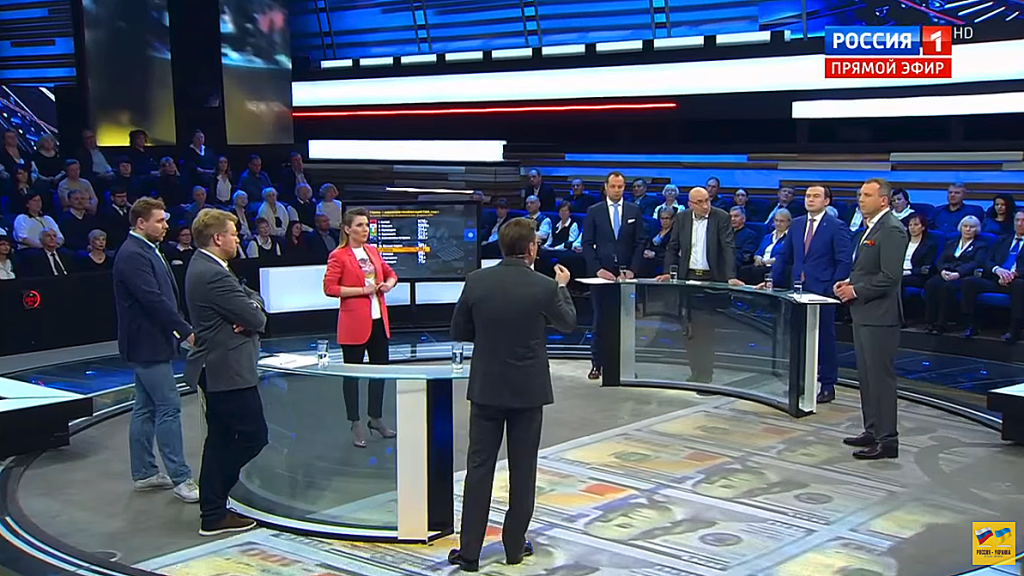 In April of 2018, an unnamed manager of a large Russian investment firm said: “We have already prepared for this scenario in 2014. Until that time, we kept information about these securities (bonds have long been issued not in paper form, but in digital form) in the US. In the midst of the confrontation in Donbas, we moved it to Europe. As a result, Americans do not have direct access to this information. To block the account, the US must now agree on this with the European depositary. It can certainly take a very long time. And as soon as there are rumors of such activities, Russia will have time to sell all the holdings from that account or transfer them to another country.”

China remains by far the largest holder of U.S. Treasury securities, holding $1.18 trillion at the end of May. Russian state media openly pondered whether China might sell U.S. treasury holdings en masse, taking in consideration the trade war initiated against them by the Trump administration.

Uralsib analyst Olga Suterina opined: “If China starts to dump U.S. government securities in retaliation against the United States, their value will decrease and as a result, the Russian portfolio will depreciate along with others. Since China is the largest holder of US bonds, there is a risk that a trade war can lead to the sale of bonds by China, and perhaps we have somehow protected ourselves.” 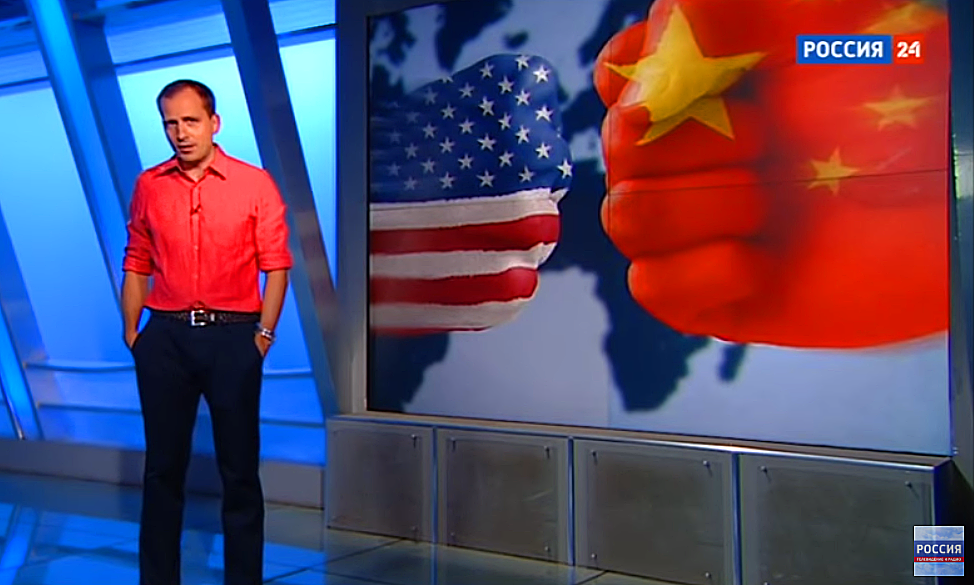 It should be noted that in 2008, Russia attempted to convince the Chinese to “join together and sell Fannie and Freddie securities on the market.” The Russians were suggesting a joint pact with China to drive down the price of the U.S. debt and maximize the turmoil on Wall Street. The plot didn’t materialize, but some Russian experts are still hopeful it remains a possibility in the future.

U.S. analysts previously noted that the dumping of the U.S. debt could be a possible tool in a global trade war. As Reuters reported, “Should China, Japan and other nations, which have recycled their trade dollars through their Treasuries holdings, suddenly decide to whittle them down, markets could be in for a rough ride.”

Contrary to Trump’s hope of establishing “an extraordinary relationship” with Putin and “getting along with Russia,” the Kremlin and its talking heads continue to see the U.S. as Russia’s main adversary. For decades, Russia has been openly hoping for the demise of the American financial system.

The sale of US debt securities is “primarily a political decision,” says senior analyst at a Russian investment company BKS, Sergei Suverov: “The Central Bank kept up to 30% of assets in US Treasury bonds. They were criticized for this from all sides, therefore, taking American sanctions into account, reducing the position in dollar assets seems logical.”

The head of Russia’s Central Bank, Elvira Nabiullina, admitted that geopolitical risks are being taken into account. She refused to elaborate as to where Russia was moving the funds, freed up after selling off the U.S. Treasury securities. Nabiullina said, “We are pursuing a policy so that the reserves are safely stored and diversified. We assess all the risks – financial, economic, geopolitical, while deciding on the placement of funds.” Nabiullina said that the new structure of Russia’s foreign holdings will be revealed with a 6-month delay from the date the action was taken.

According to the Raiffeisen Bank analyst Denis Poryvay, the newly released funds can be moved to Europe or invested into gold. Poryvay added: “Gold cannot completely replace U.S. Treasury bonds, because the liquidity of assets is completely different – the gold market is much smaller than the U.S. Treasury bonds market.”

Some speculate that Russia may have moved its Treasury holdings to the Cayman Islands, with its holdings going up by $20 billion over the past two months.

Russian state media reported that Russia’s Central Bank is redistributing its reserves due to “the feeling of impending trouble in the world economy.”