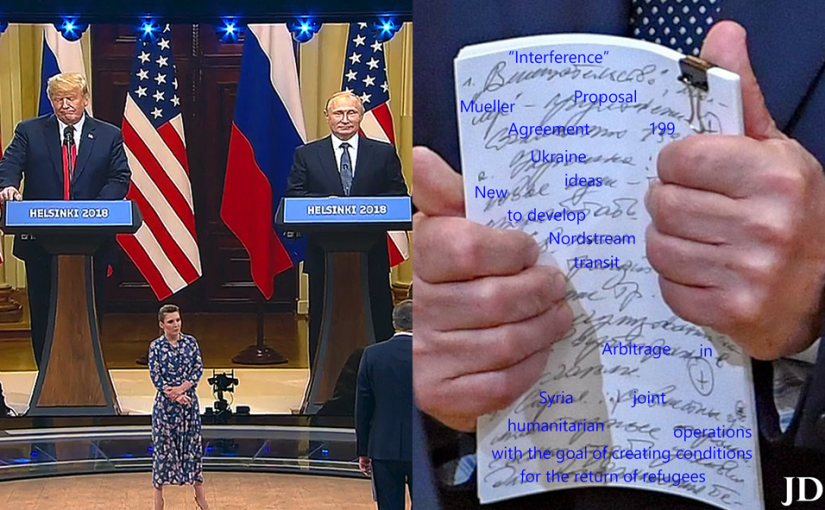 Having masterfully set the stage for another propaganda coup, Russia is enjoying the spoils of the Trump-Putin summit in Helsinki. The Kremlin’s bullhorns predicted an easy victory, but the reality surpassed their wildest expectations. President Trump and Russian President Vladimir Putin performed their parts in a spectacle that was a propagandists’ dream come true.

Russia’s Foreign Minister Sergei Lavrov, known for his perennially stone-faced demeanor, was beaming with glee. When asked how the summit went, Lavrov gushed: “Better than super. Fabulous.” The Russians expected concessions, but even they were shocked by Trump’s willingness to blame America first. Reuters reporter Jeff Mason asked Trump to elaborate upon his Tweet, blaming U.S. “foolishness, stupidity” and the Mueller probe for the decline in U.S. relations with Russia. Mason asked: “Do you hold Russia at all accountable for anything in particular? If so, what would you consider them that they are responsible for?” Trump replied: “Yes, I do. I hold both countries responsibility. I think the United States has been foolish. I think we have all been foolish.”

Trump missed a prime opportunity to confront Putin about Russia’s election interference, hacking, cyberattacks, its bloody aggression in Ukraine, the annexation of Crimea, the downing of the Malaysian airliner MH17, the Skripal poisoning on allied British soil, the murder of Boris Nemtsov and the continued imprisonment of multiple Ukrainian activists, including Oleg Sentsov, in Russian jails. Russian state TV promptly pointed out that Trump never mentioned Russia’s aggression, the annexation of Crimea or the Skripal case.

#Russia's state TV:
The host: "Let's analyze Trump's performance at the presser. At which point in time could you say he was licking Putin's boots? Why did @Schwarzenegger describe him as a wet noodle?… He said nothing about the annexation, [Russian] aggression or #Skripal."©️ pic.twitter.com/dPCJkgVGRt

Instead, Trump blamed the U.S. along with Mueller, defending himself and Russia. Trump exclaimed: “I think that the probe is a disaster for our country. I think it’s kept us apart. It’s kept us separated. There was no collusion at all. Everybody knows it… People know that. People understand it. The main thing — and we discussed this also — is zero collusion. It has had a negative impact upon the relationship of the two largest nuclear powers in the world. We have 90 percent of nuclear power between the two countries. It’s ridiculous. It’s ridiculous what’s going on with the probe.” When the ball was in his court, Trump chose to drop it.

Both hosts of a popular Russian program “60 Minutes” were taken aback by the self-flagellation delivered by the American President on behalf of his country. Russian state TV host Evgeny Popov said, “It is very bizarre, you can’t bash your own country like that – especially when you’re its President.” Co-host Olga Skabeeva went even further, by adding: “When Trump says our relations are bad because of American foolishness and stupidity, he really smells like an agent of the Kremlin.”

#Russia's state TV host:
"It is very bizarre, you can't bash your own country like that – especially when you're the President."
Female host: "When Trump says our relations are bad because of American foolishness and stupidity, he really smells like an agent of the Kremlin." ©️ pic.twitter.com/8fRLrZbUul

The scent of the Kremlin grew ever more pungent with every relinquished opportunity to confront Putin about Russia’s election meddling. In preparation for the summit, President Trump and his aides crafted the plan to use the recent indictment of 12 Russians for hacking the DNC computers during the 2016 campaign to confront Putin on Russia’s interference in the U.S. elections. All 12 defendants are members of the GRU, an intelligence agency within the main intelligence directorate of the Russian military, all of whom were acting in “their official capacities.”

A White House official told the Wall Street Journal, the idea was to “shove [the indictment] in Putin’s face and look strong doing it.” Instead, Trump did “the exact opposite,” appearing to side with Putin over U.S. intelligence agencies by stating he saw no reason why Russia would have interfered in the election.

The subsequent correction of “would” to “wouldn’t” didn’t resonate with audiences at home or across the pond. Appearing on Russian state television, Sergey Fedorov, Senior Scientific Associate at the Institute of Europe of the Russian Academy of Sciences, explained that in Helsinki, Trump expressed his true belief and retracted it upon returning to the U.S. solely because he faced harsh criticism. The large audience enthusiastically clapped, endorsing Fedorov’s point of view.

#Russia's state TV:
The Russians scoff at Trump's attempt to "correct" what he said @ the #HelsinkiSummit.
Sergey Fedorov: "It's very simple. First time, he said what he thought. Then he got back to the Oval Office, discovered a hysterical reaction & realized he overdid it."©️ pic.twitter.com/W2rotdHFno

The entire news conference was expertly dominated by Putin, complete with his overt demonstration of the alleged talking points, conveniently written in an extra-large font. The Russian leader held up the notes, seemingly giving himself the thumbs-up. Discernible portions read: “Election interference… Mueller… proposal… Agreement 199… Ukraine… New ideas… to develop… Nordstream… transit… arbitrage… Syria… joint humanitarian operations with the goal of creating conditions for the return of refugees.”

By popular demand, I am expounding upon my original posting, deciphering Putin's summit notes he was showing off at the #HelsinkiSummit. ©️@MaddowBlog @maddow pic.twitter.com/CUEyf4haCM

Such a slip-up by an experienced Chekist is nearly inconceivable and was most likely intentional. The content of the notes is self-explanatory and the reference to “199[?] agreement” most likely relates to the 1999 Treaty with Russia on Mutual Legal Assistance in Criminal Matters. Putin mentioned the treaty, while offering Russia’s cooperation in the Mueller case. The Russian President said: “Things that are off the top of my head. We have an existing agreement between the United States of America and the Russian Federation, an existing treaty that dates back to 1999. The mutual assistance on criminal cases. This treaty is in full effect. It works quite efficiently.”

Putin proceeded to make an abjectly absurd offer, proposing that Russian authorities conduct the questioning of the 12 indicted GRU members, permitting the Mueller team to travel to Russia and merely watch the questioning. In exchange, Putin requested the questioning of the former U.S. Ambassador to Russia, Michael McFaul, the British businessman Bill Browder, as well as multiple unnamed U.S. intelligence officers. Instead of expressly rejecting Putin’s unpalatable proposal outright, Trump agreed to consider it and lingered for days before it was officially rejected.

The summit produced another non-starter, birthed by the Russian side: a proposal to hold a referendum in Eastern Ukraine. Trump’s failure to immediately reject it provided fertile ground for the Russian state TV propagandists, predicting that such a referendum will lead to Donbas seceding from Ukraine and subsequently being annexed by Russia, akin to Crimea. The proposal was finally shot down days later.

#Russia's state TV:
Ex-diplomat Nikolay Platoshkin says that the referendum in E. Ukraine, offered to Trump by Putin, would be followed by another referendum.
Female host clarifies: "First about seceding, then about joining Russia."
Platoshkin proceeds to reminisce about Crimea. pic.twitter.com/QzFNipShb5

Trump’s repeated refusal to immediately reject Putin’s unworkable propositions could be explained only by his utter lack of preparedness for this top-level meeting, or the fact that he is unwilling to confront or contradict the Russian leader on any front. The latter would also explain Trump’s puzzling insistence that a large portion of the summit would exclude any aides or advisers. An experienced and cunning politician, Putin could hold his own, while Trump seemingly self-surrendered on every topic. Russian state TV programs explained that Putin had to come to Trump’s rescue by bringing up Crimea, which might have otherwise gone unmentioned.

#Russia's state TV:
The host: "Trump failed to mention #Russia's aggression in #Ukraine and the annexation of Crimea. He didn't forget, but purposely didn't mention it… Putin had to come to Trump's rescue" [reciting what should have been included in Trump's talking points.] ©️ pic.twitter.com/xJzWCxR9Q9

Speaking at Moscow’s Valdai Discussion Club, Russian Ambassador Anatoly Antonov said that “the Ukrainian issue was not at the center” of the Trump-Putin talks. The Russian state media amplified the claim that Ukraine was mentioned “only on the periphery” of the summit.

#Russia's state TV is gloating that #Ukraine was mentioned "only on the periphery" of the #HelsinkiSummit. pic.twitter.com/YM2Ad4MXtf

These assertions directly contradict the notion that Ukraine was one of the top three topics of the summit, as one might surmise by reviewing Putin’s notes, conspicuously showcased during the press conference. That seems to suggest that the scribbled highlights were contrived as a prop, an optical illusion, meant to convince the world that the summit centered around the most pressing issues of the day.

The entirety of the Trump-Putin discussions remains a mystery. Russia claims that agreements were made at the Helsinki summit, while the National Security Council insists that “There were no commitments to undertake any concrete action, beyond agreement that both sides should continue discussions.” Without a formal record of the proceedings, Russian spin masters are propagandizing “useful” verbal agreements, allegedly ranging from joint efforts in the cyberspace, economic cooperation and Putin’s assistance to the U.S. in its anticipated withdrawal from Syria, to the already debunked claims that Trump consented to the Ukrainian referendum. In the Russian state media, Trump is portrayed as the most pro-Russian politician in the United States, willing to make innumerable concessions and fulfill Russia’s long-range goal of destroying the transatlantic unity.

#Russia's state TV:
Tatyana Parkhalina:
"I never thought I’d live to see this—neither the USSR nor Russia, who tried many times to drive the wedge between transatlantic allies, but Washington is doing everything to break down the foundations of transatlantic alliance & unity."©️ pic.twitter.com/AlG3QytN8S

“Trump fought with all NATO members,” gleefully says Russian state TV host Olga Skabeeva, adding: “This goes with the theme that he is still ours.” Just days after the summit, Treasury Secretary Steven Mnuchin announced that the U.S. Treasury is open to removing Russian aluminum producer Rusal from a U.S. sanctions list. The timing of this announcement fuels the fire of speculation, as the Russian state media previously predicted the “creeping removal of sanctions.”

#Russia's state TV speculates that GOP lawmakers are in Russia, because Congress previously limited Trump's power to lift the sanctions, now he needs to convince Congress to reverse that legislation. They say this "important visit" will lead to the "creeping removal of sanctions" pic.twitter.com/ToePb12hS7

As the West starts to pay attention to what is being said by the politicians and government figures on Russia’s government-controlled TV, some participants are concerned that Americans might find their pervasively anti-American narrative unsettling. Andrey Bezrukov, an associate professor at the MGIMO Institute of International Relations of the Russian Ministry of Foreign Affairs, cautions: “Let’s not celebrate our victory, it’s like waving a red flag in front of a bull. Let’s rejoice, but quietly.”

In the aftermath of the summit, the Kremlin is achieving its prime propaganda goals, as Russia continues to shape the narrative and Putin positions himself as the most powerful man in the world.