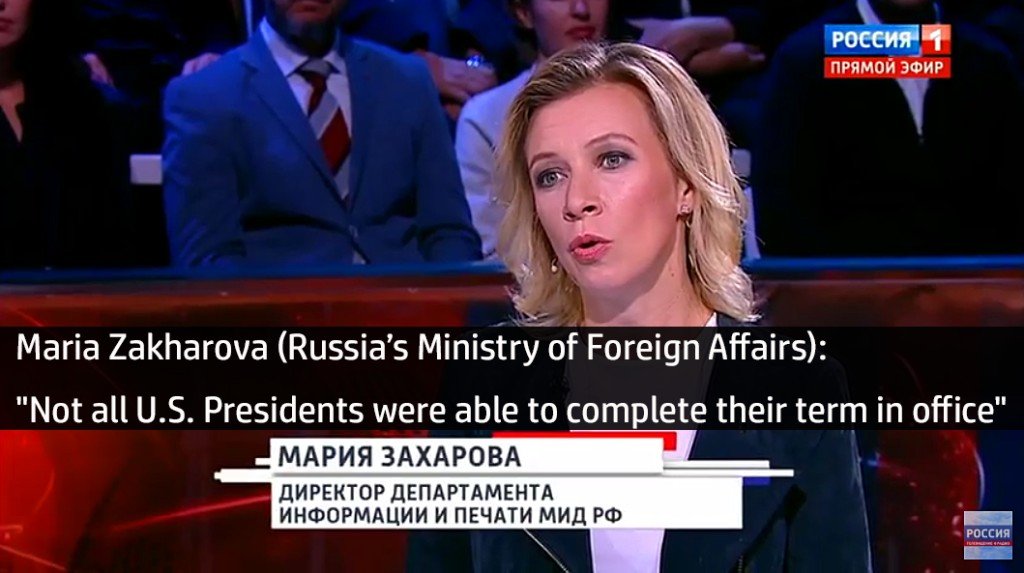 In recent days, the currents in Putin’s Russia have noticeably shifted. Triumphant exclamations “Trump nash” (“Trump is ours”) have been replaced by weary criticism and veiled threats.

Russia’s state television programs serve as a good barometer of the Kremlin’s moods, as most participants receive a “metodichka” (printed manual, as to the main themes to be discussed). Opinions pushed by the hosts and participating government officials deserve special attention.

Recently, Russian politician Sergey Stankevich sharply criticized Trump, stating that the U.S. does not have a viable President and therefore, Russia doesn’t have a reliable partner in Washington, DC or anyone with whom Russia could negotiate. Stankevich described the American President as an elderly, barely competent, nervously weary, fussy man, who is more fit for show business or real estate transactions – not politics.

The host of Russia’s ’60 Minutes’, Evgeny Popov, caustically asked: “So why did we [Russia] elect such a President [Trump]?” This comment could be taken as braggadocio, sarcasm or trolling. Notably, the audience enthusiastically clapped, but didn’t laugh.

#Russia's state TV host pours more gas on the fire, saying:
"So why did we elect such a President?
Audience claps.https://t.co/SE8PZkkxup

Trump’s failure to live up to Russian expectations is a recurring theme on Russian state TV:

Russia's state TV: Trump is being weakened by a number of people, but he's responsible for sanctions. What a crummy President we've elected. pic.twitter.com/sftEQCVMiP

Russia’s election interference is a topic that is being discussed on state television with a great measure of defiance and irreverence. On the same show, one of the panelists asserted that “Russia influenced, is influencing and will continue to influence the outcome of elections in Germany.” The host happily added: “And all over the world.” Some participants argued this influence was based on Russia’s “persuasive foreign policy,” while others conceded that Russian hackers and planting or spreading derogatory information about Western politicians played a part.

Russia's state TV: "Russia influenced, is influencing & will continue to influence the outcome of elections in Germany & all over the world" pic.twitter.com/HqIIEf600g

Earlier on the same show, hosts and panelists discussed challenges posed by the American Congress forcing Trump to sign the bill that contained additional Russian sanctions. Female host (Olga Skabeeva) concluded: “As previously discussed, we need to elect our own U.S. Congress.”

Skabeeva later walked back that comment, claiming, “We were only kidding.”

#Russia's state TV: "Julia, we were only kidding" about electing "Russia's own" U.S. Congress. pic.twitter.com/8ks4BxtUZL

However, it’s important to note that discussion included serious concerns about the difficulties experienced by Russian lawmakers in attempting to reach American Congressmen in light of the ongoing Trump/Russia investigation. For example, Russian politicians complained that members of the U.S. Congress would no longer agree to hold discussions via Skype, much less to meet. The desire to influence members of the U.S. Congress is hardly a joking matter in Russia – especially in light of the view that Trump is being forced to act a certain way as a helpless “political infant.”

#Russia's state TV: "Trump is a political infant, who is being severely swaddled."
Female host adds: "and placed into geopolitical coffin." pic.twitter.com/xFx7Vn3Rd0

Even after Trump signed the new sanctions, Russian politicians and propagandists remained hopeful he would somehow sabotage their implementation.

Politicians, experts on Russian state TV discuss many ways in which they hope Trump may sabotage/challenge/fail to implement new sanctions. pic.twitter.com/Lq2HF8xh0e

Russia was supportive and protective over the freshly-elected Trump, believing that he would remove the sanctions and act in furtherance of his self-proclaimed pro-Russian stance.

#Russia's state TV is overjoyed about #Trump's commentary, counting days to his inauguration.
Title of the segment: "Trump Slapped the West" pic.twitter.com/7kZUOpVhLY

#Russia's state TV:
"#Putin would have a good reason to reply "My pleasure," because no one was rooting for #Trump more than the Russians." pic.twitter.com/MSWGxBjAI8

One of Russia’s top propagandists, Dmitry Kiselyov of ‘Vesti Nedeli’, repeatedly worried whether Trump might get assassinated for his anti-establishment views.

#Russia's gov't-funded Vesti claims Trump is in danger of being murdered by US intel agencies for pro-Russia stance. pic.twitter.com/pcPcIgtxcy

Russia's state TV: "Since last fall, we've been wondering whether Trump will be murdered… Turns out, he can be ousted without a shooting." pic.twitter.com/ItpE3z2uiC

Illusions were gradually shattered, as Trump wasn’t coming through and sanctions remained in place. The Russians started wondering, whether they made a huge mistake by celebrating Trump’s election with cheers and champagne.

#Russia's state TV:
"Russia is escaping out of #Trump's trap… Some drank champagne to celebrate his victory… It's time to get real." pic.twitter.com/qGZ0ch6VZy

Politician on #Russia's state TV urges retaliation:
—"Let's hit Trump with our Kompromat!"
Host: "Do we have it?"
— "Of course we have it!" pic.twitter.com/Wfn4oi74ZZ

The biggest shift took place after Russia was ordered to vacate the San Francisco Consulate and two annexes in the U.S. Maria Zakharova is the Director of the Information and Press Department of the Ministry of Foreign Affairs of the Russian Federation. She undoubtedly speaks for the government of the Russian Federation. Zakharova’s recent commentary was shocking, to say the least.

Appearing on Vladimir Soloviev’s Sunday show, the host told Zakharova that Trump’s recent decision to shutter the Russian Consulate was unprecedented for any American president. In response, Zakharova bluntly asserted: “Not all American presidents were able to complete their term in office. It’s good to remember that in light of today’s historical realities, as far as the kind of a nation we’re dealing with.”

Spokeswoman of #Russia's MFA re: Trump's recent closure of RF facilities:
"Not all US Presidents were able to complete their term in office" pic.twitter.com/dUpFg0oAwH

Soloviev looked noticeably stunned, describing Zakharova’s comments as a “sensational” prediction of Trump’s impeachment. He said, “All American newspapers will come out with headlines “Maria Zakharova predicted the impeachment of the President of the United States” – I brought you into this world and I will take you out.” (Yet another not-so-subtle reference to Russia’s involvement in American elections).

Stunned host of #Russia's state TV asks whether she is predicting impeachment, she says it's NOT about impeachment.https://t.co/YMQLkYIpGo

Zakharova’s intentionally vague statement, with no apparent segue to the topic of Russian consulate/annex closures, could be interpreted in 3 possible ways:

Whichever way one might interpret Zakharova’s statements, one thing is clear: the Russian government is no longer enamored with Trump and the official Kremlin is making it known. The ramifications of the intensifying chill remain to be seen in the coming days.