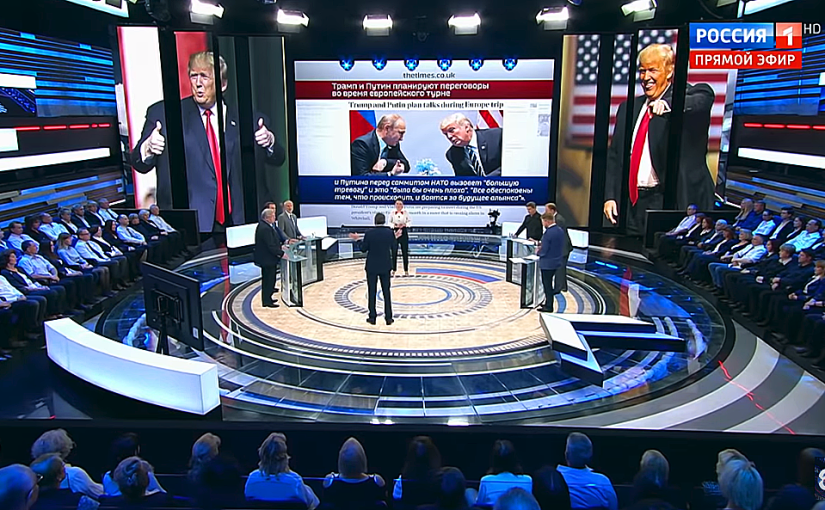 The impending Trump-Putin summit is a source of high hopes in Putin’s Russia and a cause for high anxiety in the West. Russia is viewing the summit as the end of the political isolation that followed the annexation of Crimea. The West sees it as an undeserved normalization of relations, since Russia has not done anything to warrant being treated as a trustworthy political partner.

The optics of this normalization are just as bad as the facts on the ground. After invading Ukraine (where Putin’s hybrid aggression continues to claim lives), annexing Crimea, downing the Malaysian flight MH17, military and political support for the Assad regime, in spite of chemical attacks and the ongoing massacre of civilians, the Skripal poisoning, election interference in the U.S. and Europe — having not done a single thing to address or remedy the situation, Russia is about to be welcomed into the fold by the President of the most powerful country on earth.

On June 26, 2018, U.S. Energy Secretary Rick Perry met with his Russian counterpart, energy minister Alexander Novak. According to the Russian state media, the meeting included discussions about Nord Stream 2, a controversial pipeline that is officially opposed by the U.S.

Bad optics only get worse from here. The meeting between Putin and Trump is tentatively set for mid-July, with the potential location of Helsinki, Finland being reportedly chosen to “offer Putin his desired neutral ground in a country close enough to Russia that he could return to Moscow in time for the final World Cup match on July 15.”

The cherry atop Putin’s World Cup sundae is a real coup de grâce for the Kremlin. Instead of being rightfully treated like the world’s pariah, Putin’s Russia is about to be rewarded with the inexplicable pilgrimage of American officials. A group of Republican lawmakers will celebrate American Independence Day, the 4th of July, in Moscow.

You heard it here first — the 4th of July in Russia, now confirmed.
LA Sen. @SenJohnKennedy and AL Sen. @SenShelby confirm to CNN that they will travel to Russia next week. Kennedy confirmed that @SteveDaines of MT and @SenJohnHoeven of ND are also going. https://t.co/5xZasYbYp2

American kowtowing is an endless source of entertainment on Russian state TV, with jokes being made about Trump and his representatives coming to Russia “to make deals with our hackers, so they can rig the midterms in favor of Trump’s team.”

#Russia's state TV:
The host, Vladimir Soloviev, who frequently boasts of being friends with Putin, jokes that perhaps Trump and his representatives are traveling to Russia "to make deals with our hackers, so they can rig the midterms in favor of Trump's team." pic.twitter.com/Xak9cNvFpo

“Joking” about Trump’s perceived allegiance to Russia, hackers, troll factories, election interference, etc. is nothing less than a strategy, designed to mock these concepts, presenting them as something that is too ridiculous to be true, too outlandish, absurd and therefore no longer believable. In spite of these efforts, most Americans aren’t laughing.

Adding more fuel to the fire, U.S. national security adviser John Bolton is setting the stage for the Trump-Putin summit, as opposed to Secretary of State Mike Pompeo. The Russians speculate that Bolton will be representing Trump’s own agenda, while intentionally cutting out the State Department. Needless to say, they anticipate that Trump’s agenda will closely align with that of Vladimir Putin.

#Russia's state TV:
Vladimir Vasiliev, Senior Research Fellow at the Institute for US and Canadian Studies at the Russian Academy of Sciences, points out that Trump is sending Bolton – not Pompeo – to Russia, because he wants to cut @StateDept out of his meeting with Putin. pic.twitter.com/Vviim6k2WO

#Russia's state TV:
Politician Aleksey Zhuravlyov, deputy of the State Duma, chairman of the party 'Motherland,' says that even though Trump surrounds himself with ardent Russophobes, his actions demonstrate that he intends to follow through with his election promises. pic.twitter.com/rBIpb8Filh

Russian state media, closely aligned with the Kremlin, predicts that Trump will make concessions to Putin. They even suggest it wouldn’t hurt “to ask for the return of NATO to its pre-1991 borders.” Regardless of the outcome, state TV pundits advocate that Russia should use the summit to its advantage, by demonstrating that the consolidated West and transatlantic unity ceased to exist. Trump’s outreach to Putin provides an enormous agitprop gift that will be used to full capacity in Russia’s ongoing info-wars against the West.

#Russia's state TV: Hosts and politicians conclude that "something big is underway," as Trump is getting ready to meet Putin, John Bolton will be traveling to Moscow and GOP Senators will spend the 4th of July in Russia. They anticipate US proposals that are acceptable to Russia. pic.twitter.com/mtfibPVfqF

On various state TV programs, Russian politicians, experts and talking heads speculate that the agreement Putin and Trump will sign at the summit has already been finalized and will contain nothing more than generalized statements about cooperation in combating terrorism, continued deconfliction in Syria and other “common goals.” They repeatedly predict that a secret, verbal agreement will be entered into with respect to Ukraine, with Trump agreeing to look the other way, while Putin intensifies the ongoing aggression.

#Russia's state TV:
Politicians & experts reiterate their belief that Trump & Putin will enter into a "secret verbal agreement," wherein Trump will look the other way w/ respect to #Ukraine. Political scientist: “Agenda for the Trump-Putin summit should omit the word “Ukraine.”” pic.twitter.com/BcduICUEZk

#Russia's state TV:
Yury Afonin, member of the State Duma, says that the main intrigue – in light of Trump's recent comments about Ukraine – is the likelihood of Trump and Putin entering into a secret verbal agreement during their upcoming get-together. pic.twitter.com/u2WF7YXMmN

All in all, the Russians are continuing to reiterate their mantra, “Trump is ours,” feeling giddy about the possibility of sanctions not being enforced in exchange for – well, nothing.

#Russia's state TV:
Participants discuss @BuzzFeed report that Trump told G7 leaders "Crimea is Russian, because everyone who lives there speaks Russian." They interpret it as Trump's recognition of Crimea's status.
The hosts triumphantly declare: "Crimea is ours, Trump is ours!" pic.twitter.com/kOhrIodHU7

#Russia’s state TV:
Experts and politicians seem very certain that Russia will get something for nothing as the result of the Trump-Putin summit.
Political scientist opines that Bolton is crazy about Iran and Russia “could trade #Iran for #Ukraine, but what for? What for?” pic.twitter.com/Zd2LsSP2gN

Trump’s reported G7 comments to the world leaders reinforced the Russians’ belief that Trump intends to follow through on his “election promises,” such as “getting along with Russia.”

#Russia's state TV:
Politician Aleksey Zhuravlyov, deputy of the State Duma, chairman of the party 'Motherland,' says that even though Trump surrounds himself with ardent Russophobes, his actions demonstrate that he intends to follow through with his election promises. pic.twitter.com/rBIpb8Filh

Since the Kremlin concedes nothing and has no intention of ceasing its hostilities, “getting along with Russia” in lieu of holding it accountable is tantamount to total capitulation.

#Russia's state TV:
Hosts and politicians react to Trump's suggestion that Putin would give up Crimea, get out of Ukraine and Syria if Trump asked him nicely. Everyone chuckles or laughs out loud. pic.twitter.com/LCI1mFnZhJ

In the meantime, Russia continues to hope that America destroys itself, the EU dies and the pro-Russian government officials in Italy and Austria get in the way of renewing the sanctions.

#Russia's state TV:
The host and experts predict that in one year's time, the EU may cease to exist and instead of Russia having to go through Germany or France to deal with the West, they will have to go through Russia to get to Trump. pic.twitter.com/m0JfGwz0Xx

#Russia’s state TV:
The host asks: “How should we deal with Americans?”
Politician Zatulin:
“Let’s blow up a nuclear bomb to get their attention. But no, we can’t act like #NorthKorea. Calmly sit on the porch & you'll see the corpse of your enemy being carried down the street.” pic.twitter.com/n7xNzQpCcm

Putin’s state media is already using the impending summit as a propaganda victory. Only time will tell just how much of our security and transatlantic unity will be given away in exchange for photo ops with an unabashed authoritarian and empty promises of “cooperation” with our adversary.