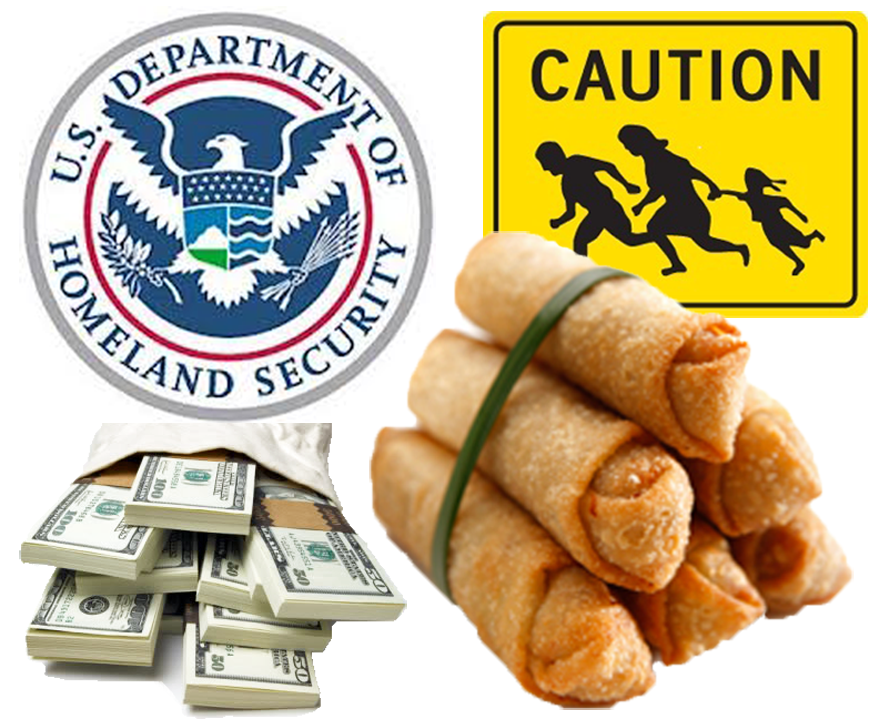 A U.S. immigration officer was sentenced on October 3, 2014 to two and a half years in federal prison, for accepting bribes in the form of cash and egg rolls from applicants seeking citizenship and green cards.

Mai Nhu Nguyen, 48, served with U.S. Citizenship and Immigration Services in Santa Ana for eight years. She pleaded guilty to receiving bribes as a public official between July 2011 and May 2013. As an immigration service officer, Nguyen had the authority to approve or deny immigration applications.

In one of the instances of bribery, Nguyen called a vendor to order 300 egg rolls. She then told an immigration applicant to pay for the $150 food order and deliver it to her workplace. Once the task was performed, Nguyen proceeded to approve the immigrant’s paperwork.

Unfortunately, bribery is very common within the Department of Homeland Security. Earlier this year, Immigration and Customs Enforcement (ICE) Special Agent James Dominguez admitted guilt for his role in a bribery scheme that illegally funneled confidential DHS records to a Los Angeles immigration lawyer, Kwang Man “John” Lee (a former U.S. immigration official), doctored information in secret government databases and sanctioned sham marriages involving foreign nationals. The plea deal offered to Dominguez was a bargain, since it allowed him to be held accountable only for making false statements. This will undoubtedly minimize the punishment for this elaborate scheme that spanned nearly two decades and involved tens of thousands of dollars in bribes.

Corruption within the Department of Homeland Security is able to flourish because it involves the very officials tasked with extinguishing criminal wrongdoing. For example, former Supervisor of the DHS Office of Inspector General (OIG) Eugenio Pedraza was found guilty of conspiracy and falsifying government documents. He conspired with other ICE Special Agents (Rolando Gomez, Marco Rodriguez and Edwin Castillo) to falsify investigative reports pertaining to bribery, drug and alien smuggling, forge deportation documents, and destroy falsified supervisory case reviews.

Rolando Gomez, Marco Rodriguez and Edwin Castillo were placed on paid administrative leave and reached non-prosecutorial agreements with the government. All charges were dropped against them with prejudice, which means they can’t be prosecuted for the offenses at issue ever again.

There is an unfortunate pattern in the prosecutions of culpable Department of Homeland Security personnel. High-ranking officials are more likely to escape accountability with minimum punishment, while low-level offenders face the harshest penalties.

For example, Frank Johnston, former Assistant Special Agent in charge of ICE Homeland Security Investigations (HSI) was sentenced to 24 months in federal prison for obstruction of justice, giving false information to a federal prosecutor and a federal judge in Florida, and devising a scheme to have his wife paid nearly $600,000 by the agency.

Former ICE Agent Richard Cramer is one of the highest-ranking immigration agents arrested on corruption charges. He provided drug traffickers with confidential law-enforcement background checks that helped smugglers avoid capture. Cramer was charged with multiple counts of drug smuggling and faced as many as 20 years in prison. He was sentenced to 24 months in prison.

Transportation Security Administration (TSA) manager Bryant Jermaine Livingston was running a prostitution ring out of a Crowne Plaza Hotel in Maryland. He pleaded guilty, received no prison time and was ordered to pay a $500 dollar fine.

CBP Officer Manuel Salazar allowed drug smugglers to transport 1,700 pounds of marijuana through his inspection lane in exchange for a bribe of $10,000 dollars. He was sentenced to 24 months of probation.

Daphiney Caganap, the head of the Immigration and Naturalization Service (INS) intelligence unit and anti-smuggling operations at the San Ysidro Port of Entry, covered up an illegal alien and drug smuggling operation. In exchange for bribes, Caganap allowed the smuggling to continue for years. When questioned by the FBI, she lied under oath. Even after the government became aware of Caganap’s bribery, she continued to receive promotions and was appointed as the Customs and Border Protection (CBP) Port Director at the Metro Detroit Airport. Once criminally charged, Caganap was facing 36 years in prison. She was sentenced to 3 years of probation and a fine of $3,000. She was allowed to keep all of the bribes she received in the commission of her crimes, as no restitution was ordered.

DHS Deputy Press Secretary Brian Doyle was using the Internet to solicit a minor for sexual acts. Doyle sent pornographic materials to a person he believed to be an underage girl, who was really a Florida law enforcement officer. He tried to entice the minor by transmitting photos of his DHS credentials and his genitals. Before being hired by the Department of Homeland Security, while working at Time Magazine’s Washington bureau, Doyle was caught looking at pornography on a receptionist’s computer late at night. He admitted to the incident, was reprimanded, and had to issue a formal apology to staffers. Apparently, the DHS had no problem with this history in conducting their Deputy Press Secretary’s background check. Brian Doyle was sentenced to 5 years in prison.

The beleaguered Department of Homeland Security is not the only one to blame for inadequate punishment of its officials for serious crimes. The Department of Justice demonstrates unjustified leniency towards high-ranking government offenders, while crushing average Americans with disproportionately harsh sentences for minor offences. Unless our federal government is forced to rethink its priorities, rampant corruption, bribery and abuse of federal office under the color of law will continue to endanger the sovereignty of our nation.