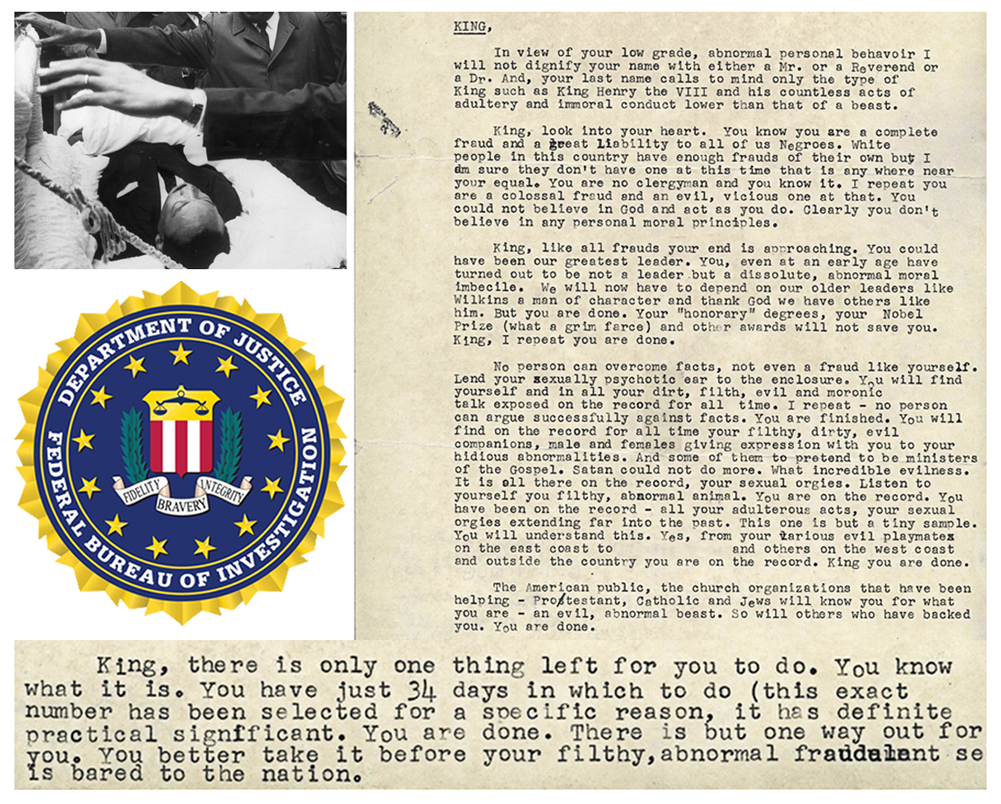 In 1999, the family of the Rev. Dr. Martin Luther King Jr. prevailed in a jury trial that found the government responsible for MLK’s murder. The family sought a mere $100 in damages, to make the point that their only goal was justice. The verdict was read aloud by the judge: “In answer to the question did Loyd Jowers participate in a conspiracy to do harm to Dr. Martin Luther King, your answer is yes. Do you also find that others, including governmental agencies, were parties to this conspiracy as alleged by the defendant? Your answer to that one is also yes. And the total amount of damages you find for the plaintiffs entitled to is one hundred dollars. Is that your verdict?” The jury responded in unison, with a resounding “Yes.”

Decades after Dr. King’s murder, the FBI’s un-redacted letter, demanding that MLK kill himself, was made public on November 11, 2014. It was found by a Yale University historian, who was conducting research in the national archives. The letter is rife with vile descriptions and accusations, referring to Dr. King as “a colossal fraud and an evil, vicious one at that … dirt, filth, evil … evil, abnormal beast.” It concludes with a demand that MLK commit suicide within 34 days, or else compromising information about his alleged sexual indiscretions would be made public.

When Dr. Martin Luther King Jr. received this letter, he told his friends that someone wanted him to kill himself. He also voiced his suspicions that the FBI’s infamous director, J. Edgar Hoover, was behind this demand. Hoover made no secret of his desire to see Dr. King discredited. The Senate’s Church Committee on intelligence overreach eventually confirmed Dr. King’s suspicion.

This shocking letter is just one example of the government’s efforts to silence outspoken activists and government whistleblowers, using the method “Deny, discredit and destroy.” These ruthless tactics survived through numerous administrations, were described in the Malek Manual and are still applicable today, albeit in a modified, more sophisticated manner. The UK spy agency GCHQ’s Joint Threat Research and Intelligence Group (JTRIG) operates in a similar way, describing their mission to “destroy, deny, degrade [and] disrupt enemies by discrediting them.”

The intelligence agencies insist on continuing their all-encompassing electronic surveillance, results of which are indefinitely stored. It isn’t difficult to imagine how the fruits of this poisonous tree could be gathered and used to blackmail political figures, whistleblowers or reluctant informants. One of many reasons why the surveillance state should not be allowed to run amok is the fact that it is being operated by human beings, capable of abuse and overreach that destroys the integrity of the justice system, as well as privacy, careers and lives of those who stand up against corruption.