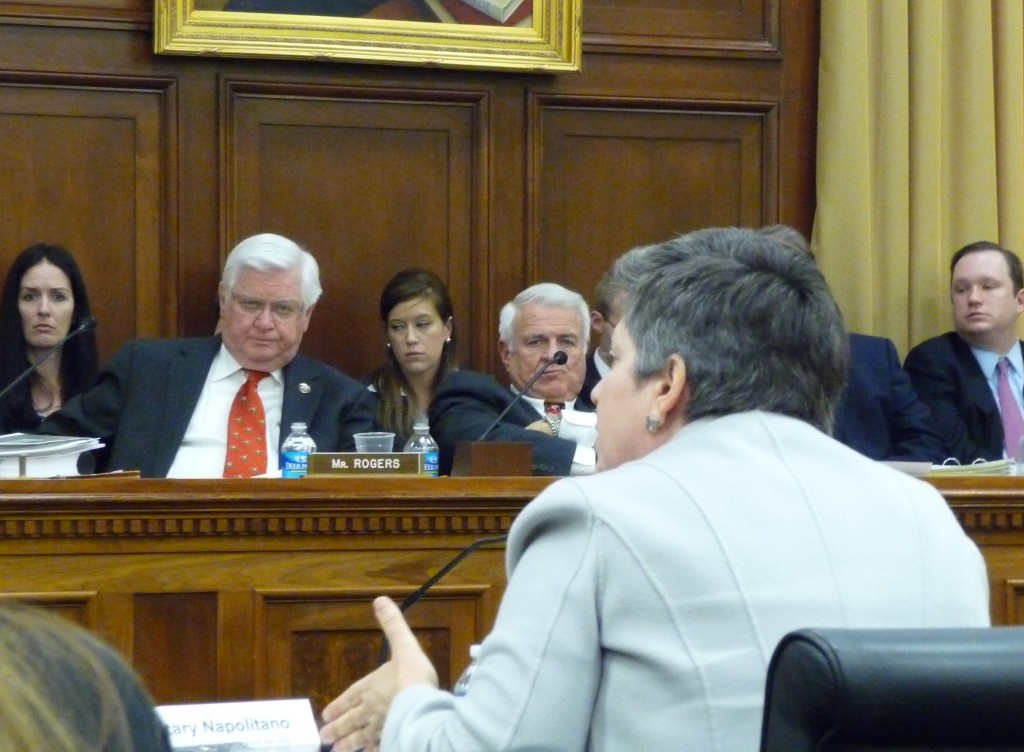 On February 25, 2010, Janet Napolitano testified before the United States Senate Subcommittee on Homeland Security Appropriations. In an uncommon display of bipartisan unity, most members were unanimous in their open criticism of the beleaguered agency and its inept leadership. Prior to the hearing, Independent Senator Joe Lieberman of Connecticut and Susan Collins, R-Maine, wrote to Napolitano, calling the size of the agency’s work force “unacceptable, untenable and unsustainable.”

This grim reality was further exacerbated by Napolitano’s proposed 2011 budget for the Department of Homeland Security, described by Congressman Hal Rogers as “simply indefensible”, “at best – curious, at worst – dangerous.” In his opening statement, Rogers said, “In the seven years that I have examined DHS’s budgets, I don’t think I’ve seen a proposal that is so poorly prioritized and that so badly fails to address the realities our country is currently facing.”

Napolitano’s budget proposal seeks to dramatically increase the size of DHS management and administrative bureaucracy, asking for a $47 million dollar increase of headquarters staff – without increasing the agency’s border workforce. This would mean that with time, due to the dramatic rates of attrition plaguing the agency, the numbers of active agents and officers protecting our ports of entry would actually decrease. “Madam Secretary, to put it mildly, I am very concerned about DHS FY11 budget request as well as the current state of the Department,“ stated Rogers.

Congressman Rogers sharply criticized the budget that focused on hiring more bureaucrats in DC headquarters, instead of law enforcement personnel. The situation is already catastrophic, as DHS agents and officers are often forced to work double shifts due to the lack of personnel. Immense pressure, exhaustion and chronic lack of sleep continually undermine the ability of America’s frontline defense to efficiently deal with security issues. DHS agencies are also lacking definitive leadership, since the Transportation Security Administration (TSA) as well as Customs and Border Protection (CBP) are still without department heads.

Congressman Rogers stated, “One look at this budget suggests the Administration’s “plan” for moving forward through the current threat environment is to:

While Napolitano wants American taxpayers to spend hundreds of millions of dollars on terror trials, she was unable to answer any questions as to what other cities are being considered as an alternative to New York City. She was similarly unable or unwilling to answer any other questions posed to her at the two hearings on the Hill on February 25, 2010. Most questions were met with a blanket answer of “I’ll have to get back to you on that” or something along the lines of “We’re working very hard to make this happen.”

The proposed budget draft seeks to spend tens of millions of dollars more on staffing than on the advanced technology or the implementation of systems to screen foreign travelers (such as the Christmas Day would-be bomber, Abdulmutallab). Napolitano also wants to significantly decrease the interdiction capabilities of Border Patrol and Coast Guard personnel, while increasing the funds devoted for bureaucrats in virtually every office within DHS’ headquarters. While Napolitano exclaimed that there is no bigger supporter of the Coast Guard than she is, her budget proposal intends to cut 1,100 Coast Guard personnel positions.

Napolitano refused to answer the question posed by Rogers as to the EINSTEIN-3 Program – a controversial intrusion detection system that monitors government computer traffic on private sector sites, with a high potential for privacy violations. Previous versions of EINSTEIN concentrated on the network gateways of government departments and agencies in the United States for unauthorized traffic. Since EINSTEIN-3 is a classified program by the National Protection and Programs Directorate, Napolitano avoided questions by requesting a meeting that is closed to the public.

Representative Calvert asked Napolitano about reports that the E-Verify system was plagued with a 54% inaccuracy rate, as well as whether the DHS is doing anything to address this problem – especially in light of the fact that the proposed budget seeks to cut funding for the program by $4.7 million dollars. Napolitano was unable to provide any clarification, except for her deliberately vague statement that the system’s inaccuracy rate was not quite as high as reported.

Congresswoman Nita Lowey asked Napolitano whether the timelines for the DHS personnel to screen the lists of airline passengers will be increased to 24 hours from the current 30 minutes. Representative Lowey emphasized that Abdulmutallab would not have been allowed to board the plane, had he been properly screened in advance. Lowey also commented that former CBP Commissioner Jay Ahern categorically rejected the idea of increasing the time for the screening of passenger lists to 24 hours, much to the outrage of the Congress. Ahern resigned from his position as the former Assistant CBP Commissioner amid reports of his unsavory dealings within the agency, including corruption, cover-ups and the sexual exploitation of female federal officers within the agency. Janet Napolitano was unable to respond to these valid concerns.

Congresswoman Lowey also asked Napolitano about the funds for the Whistleblower Protection Act (WPA), since none of the budget was devoted to the protection of the DHS whistleblowers. In the passing years, the agency continued to waste enormous resources on investigations, prosecutions, firings and other forms of retaliation against whistleblowers who report fraud, waste, abuse and national security breaches within the agency, at the enormous expense to the American taxpayers. Napolitano did not provide any response to these valid questions and the agency’s proposed budget for the Inspector General operations represents mere 1% of the budget.

Representative Kirk questioned Janet Napolitano as to the status of investigation into Project Shield, which misspent $41 million dollars of the agency’s money on what he described as a “phony surveillance program”. Kirk stated that his office sent a letter to Napolitano, inquiring as to the latest developments in this matter. Napolitano brushed these questions aside on the grounds that the letters were addressed to the Inspector General and not directly to Napolitano herself. Understandably outraged and frustrated by Napolitano’s continued refusal to answer any questions, Kirk finished by making a statement that Napolitano’s lack of knowledge as to the goings-on within the agency clearly betray her “incompetence as the head of DHS.”

Napolitano was also reminded of the reports the Agency was ordered to produce to Congress, with which she repeatedly failed to comply. The content of the DHS Secretary’s unproductive testimony is best summarized by the statement of Congressman Hal Rogers, who stated, “I’m troubled by what appears to be the Administration’s greater emphasis upon political correctness, global public opinion polls, and other “domestic priorities”, rather than a serious focus down-range for the next terror threat, the next natural disaster, or the next unprovoked attack against the American people.”