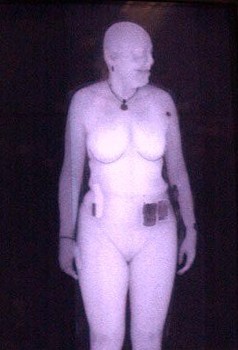 We’ve all been told that the whole body scanners are being implemented for our own good. We’ve been assured that our misapprehensions were unfounded. Body scanners penetrate clothing to provide a highly detailed image so accurate that it has been likened it to a virtual strip search. Technologies vary, with millimeter wave systems capturing fuzzier images, and backscatter X-ray machines able to show precise anatomical detail.

During Department of Homeland Security hearings, Janet Napolitano assured the Congress (and this writer who was present at the hearing) that all images collected by the full body scanners are not stored, cannot be stored and are discarded as soon as they’re viewed. Just last summer the Transportation Security Administration claimed that “scanned images cannot be stored or recorded.” Privacy advocates (including yours truly) cried foul. Turns out, they were right. Yet again we’ve been lied to by the government. Of course, as usual, the official take is that we were bamboozled for our own good.

EPIC lawsuit against the Department of Justice

In the course of that litigation, EPIC has obtained an admission by the agency that a single machine has stored “approximately 35,314 images” of the full body scans of courthouse visitors over a six month period. It turns out that the U.S. Marshals Service had surreptitiously saved tens of thousands of images recorded with a millimeter wave system at the security checkpoint of a single Florida courthouse. EPIC also obtained a representative sample of the images stored by the devices.

EPIC is also pursuing a Freedom of Information Act lawsuit against the Department of Homeland Security, pertaining to the use of body scanners in US airports. The DHS is currently withholding more than 2,000 images of individuals who have been subject to the airport body scanners.

Additionally, EPIC has filed a separate suit against the DHS, urging a federal court to suspend the airport body scanner program.EPIC said that the program is “unlawful, invasive, and ineffective.” EPIC argued that the federal agency has violated the Administrative Procedures Act, the Privacy Act, the Religious Freedom Restoration Act, and the Fourth Amendment. EPIC cited the invasive nature of the devices, the TSA’s disregard of public opinion, and the impact on religious freedom.

In an open government lawsuit against the United States Marshals Service, EPIC has obtained more than one 100 images of undressed individuals entering federal courthouses. These routinely obtained images prove that body scanning devices store and record images of individuals stripped naked. The 100 images are a small sample of more than 35,000 such images at issue in the EPIC lawsuit.

This privacy debate, which has been simmering since the days of the Bush administration, has reached a boiling point when Department of Homeland Security Secretary Janet Napolitano announced that scanners would soon be installed at virtually every major airport. The updated list includes airports in New York City, Dallas, Washington, Miami, San Francisco, Seattle, and Philadelphia. These “devices are designed and deployed in a way that allows the images to be routinely stored and recorded, which is exactly what the Marshals Service is doing,” EPIC executive director Marc Rotenberg told CNET. “We think it’s significant.”

The Gen 2 machine, manufactured by Brijot of Lake Mary, Fla., uses a millimeter wave radiometer and accompanying video camera. It has the capability to store up to 40,000 images and records. Brijot boasts that the machine can be operated remotely: “The Gen 2 detection engine capability eliminates the need for constant user observation and local operation for effective monitoring. Using our APIs, instantly connect to your units from a remote location via the Brijot Client interface.” A 70-page document showing the TSA’s procurement specifications, classified as “sensitive security information,” says that in some modes the scanner must “allow exporting of image data in real time” and provide a mechanism for “high-speed transfer of image data” over the network.

“TSA is not being straightforward with the public about the capabilities of these devices,” Rotenberg said. “This is the Department of Homeland Security subjecting every U.S. traveler to an intrusive search that can be recorded without any suspicion–I think it’s outrageous.” EPIC’s lawsuit says that the TSA should have announced formal regulations, and argues that the body scanners violate the Fourth Amendment, which prohibits “unreasonable” searches.

The Department of Homeland Security has heard our pleas and concerns – and “in response“, decided to give us even more of what we didn’t want, by dramatically expanding the full body scanner program. On July 20, 2010, the Department of Homeland Security announced a substantial change in the deployment of body scanners in US airports. According to Napolitano, the devices will now be deployed in 28 additional airports. They are designed to capture and store photographic images of naked air travelers. EPIC has filed an emergency motion in federal court, urging the suspension of the program and citing violations of several federal statutes and the Fourth Amendment. EPIC said that the program is “unlawful, invasive, and ineffective.” EPIC argued that the federal agency has violated the Administrative Procedures Act, the Privacy Act, the Religious Freedom Restoration Act, and the Fourth Amendment. Public opposition to the program is also growing. EPIC’s initial brief will be due November 1, 2010. Subsequent briefs from DHS and EPIC will be due by December 15, 2010.

Of course, it’s no longer a secret why the former head of the Department of Homeland Security, Michael Chertoff has been the most active cheerleader for the installation of the full body scanners in all American airports. Chertoff is clearly motivated by his lucrative business relationship with the machine’s manufacturer. He failed to publicly disclose this paramount conflict of interest in promoting the installation of the full body scanners, from which he stands to benefit financially.

Kate Hanni, President of FlyersRights.org, said: “Michael Chertoff has marginalized himself in the worst way possible by ‘selling’ the flying public on claims that these Rapiscan full body scanners are a panacea. While these body scanners detect ‘anomalies’ that are between the skin and clothing, they will NOT detect anything in a body cavity that is deeper than 1/10th of an inch, which experts warn will likely be a part of future attacks. This just adds insult to injury, as Mr. Chertoff shamelessly peddles his wares using the nation’s airwaves and a near-national tragedy.”

As of October 1st, 2009, 150 of these units were ordered by the Transportation Security Administration costing the American taxpayer $25 million in stimulus funds, with another 300 on order at a cost of $51 million. As Hanni’s sees it, “half measures get us nothing. It’s time to hit the pause button and do a wholesale review of what we have today so we can implement policies that will offer the flying public the most secure and efficient travel process possible under the current circumstances.”

Following field tests at international airports in Rome, Milan, Palermo, and Venice, the Italian civil aviation authority has determined that airport body scanners are inaccurate and inconvenient. Earlier this year the European Commission found that body scanners have “raised several serious fundamental rights and health concerns,” and recommending less intrusive measures. The European Parliament Committee on Civil Liberties, Justice and Home Affairs has announced a hearing on the Body Scanner program for October 6, 2010.

In letters to Senator Lieberman and Senator Collins, EPIC President Marc Rotenberg and consumer advocate Ralph Nader urged the Senate Committee on Homeland Security and Governmental Affairs to “convene a public hearing to review the government’s deployment of whole-body scanners at passenger security checkpoints in US airports.” The Nader/Rotenberg letter states that the Department of Homeland Security and the Transportation Security Administration have “disregarded serious questions concerning the devices’ effectiveness, privacy safeguards, and potential health impacts.” In a letter to the US Marshal Service, Senators Lieberman and Collins earlier expressed concern about the ability of these devices to store and retain images. These concerns are now coming to the forefront of the public’s attention. In the mean time, the Department of Homeland Security is requesting $72 million to invest in detection systems, which includes funding for the backscatter machines, which cost between $100,000 and $200,000 each.

The backscatter machines use high-energy X-rays that are more likely to scatter than penetrate materials as compared to lower-energy X-rays used in medical applications. Although this type of X-ray is said to be harmless, it can move through other materials, such as clothing. When being screened, a passenger is scanned by high-energy X-ray beam moving rapidly over her body. The signal strength of detected backscattered X-rays from a known position then allows a highly realistic image to be reconstructed. In the case of airline-passenger screening, the image is of the traveler’s nude form. The image resolution of the technology is high, so the picture of the body presented to screeners is detailed enough to show genitalia.

Screeners can save these nude body images to the system’s hard disk or floppy disk for subsequent viewing on either “the system monitor or on any IBM compatible personal computer with color graphics.”

Until these most serious concerns are resolved – when traveling by air, you would be well advised to leave your privacy and modesty at home.