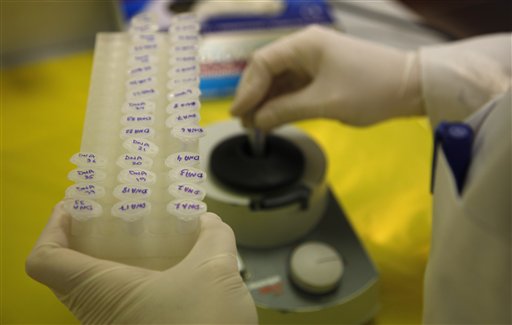 The government’s library of DNA samples, along with the names of their sources, is growing exponentially. This genetic cornucopia of DNA samples has been actively compiled since 1960’s. They were neither willingly provided nor obtained by a court warrant. The unsuspecting, defenseless targets of this massive genetic harvesting are newborn babies.

The government has your baby’s DNA

All newborns in the United States have their DNA collected, analyzed, tested and stored in state labs. The state of New York is allowed to keep those samples for 27 years, while California keeps them indefinitely. Since insurance pays for the testing, positive results for any disease or genetic predisposition become part of the baby’s medical file. In Minnesota and Texas, the states are required to destroy the baby’s DNA sample if the parents request it. In most states, however, the parents don’t seem to have any recourse. Since the testing is mandated by the government, parental consent is not needed to obtain the DNA.

Laboratory Specimen Information for Newborn Screening in the U.S. in 2010

Give up your DNA or face criminal charges

Harvesting DNA from newborns is not the only way the government accesses and involuntarily collects genetic profile samples. The original 1989 DNA collection law in California required only people convicted of murder or felony sex offenses to provide DNA samples. Proposition 69, passed in 2004, made California one of 21 states that allow the federal government to take samples of DNA from every suspect arrested on felony charges, as well as detained undocumented immigrants.

These changes were approved by voters, even though they arguably violate fundamental civil rights, such as search and seizure laws under the Fourth Amendment and due process rights under the 14th Amendment. The government continues to push for continued expansion of the database, the National DNA Index, administered by the FBI, by including those never charged or convicted of any crime.

The outcome of the ACLU lawsuit is hard to predict, given inconsistent rulings from different courts on this topic. For example, in 2006, the Minnesota Court of Appeals ruled that the state law authorizing DNA sampling from those who have been charged but not convicted of crimes violates the defendants’ Fourth Amendment rights. An Indiana appeals court disagreed by ruling that police don’t need a search warrant to force someone to submit a DNA sample.

When DNA collection laws first started to expand, many resisted giving up their samples. The government “solved” the problem by changing the law and making it a crime to resist giving DNA. The database in California is administered by the state Department of Justice. There are 17 local laboratories and 5 additional Bureau of Forensic Sciences labs within the state’s DNA Databank Program.

Too much DNA leads to backlogs and errors

According to California’s DNA Databank Quarterly Report, the number of DNA submissions added to the database after the new statute taking effect has grown by 111 %.

British geneticist Sir Alec Jeffreys, the founder of DNA fingerprinting, expressed concern over law enforcement’s expansion of the genetic profile databases after the European Court of Human Rights ruled that the U.K.’s retention of biological samples and DNA profiles of people suspected but not convicted of offenses “failed to strike a fair balance between the competing public and private interests.”

With so many samples, mistakes are inevitable. One example is a case of cross-contamination at a state-run Sacramento lab where DNA discovered on a cigarette matched the profile of a sexual assault victim from another case. A match resulted from the cigarette being processed close to the victim’s vaginal sample, picking up other DNA. Another possible source of error is the increased sensitivity of DNA equipment, raising the possibility of trace amounts of DNA being found at a scene for someone that had nothing to do with the crime.

Every American under the microscope

California is continuing to play a big part in the expansion of the genetic profile database. The Office of the District Attorney in Orange County considers DNA evidence valuable enough to offer dismissal of most non-violent misdemeanors in exchange for a DNA sample.

Therein lies the contradiction – the government continually bemoans the backlogs that cause criminal cases to linger in the system. Victims of crimes and wrongly accused inmates wait for years to have the DNA testing. At the same time, violent criminals continue to walk the streets. Back in 2003, Attorney General John Ashcroft publicly announced that the U.S. Justice Department planned to spend a billion dollars to eliminate the backlog of untested DNA evidence.

Then, instead of devoting government resources and manpower to process DNA evidence idly sitting in police departments and crime labs nationwide, the government did a complete turnaround. The Justice Department, along with Congress and state legislatures, adopted a conflicting agenda, determined to collect more DNA samples from wider portions of the population. Instead of dealing with backlogs of DNA samples already waiting to be tested, the government created an even bigger influx of genetic profile samples.

The labs are overwhelmed with collecting and analyzing DNA from newborn babies and people accused of nonviolent crimes (such as peace protestors, check kiters and detained immigrants). Crime lab directors warn that analyzing these samples allows them less time to test DNA from serious crimes, leaving violent offenders free to roam the streets and prey on new victims.

The largest known backlog is in Los Angeles County. In 2009, the L.A. City Council set aside $1.4 million to hire as many as 26 staffers for the LAPD crime laboratory. Now Los Angeles city officials are refusing to hire desperately needed analysts for the lab. This development angered victim rights advocates, since Mayor Antonio Villaraigosa repeatedly vowed to solve a massive backlog of potentially crucial evidence.

Now, the Los Angeles Mayor supports a proposed compromise, setting aside funds to outsource the backlogged DNA evidence to private labs for testing. If this proposal is rejected, the already grave situation will continue to deteriorate. City Controller Wendy Greuel called this development “outrageous and unacceptable.”

Amongst recent court proceedings impacted by the forensic lab backlogs was the case of murdered Yale student Annie Le.

In Los Angeles County, thousands of rape kits remain untested. Evidence in about 500 of the cases has been backlogged for such extended periods of time that the 10-year time limit for prosecution has passed. About half of the 1,000 kits collected at the Santa Monica UCLA Medical Center every year are from child victims ranging from 4 months to 17 years old. Prosecutors must sometimes postpone trials while waiting for kits to be tested. Some offenders use the delays to seek out more victims. We are again reminded of the old adage, “Justice delayed is justice denied.”

That is true not only for the victims, but also for people who’ve been wrongfully convicted of rape or murder. They languish in prison for years, waiting for DNA tests to prove their innocence. Since 1989, DNA tests have helped free more than 200 wrongfully convicted people in the United States. Our society would be served much better by testing DNA in backlogged criminal cases, instead of harvesting samples from newborns.

The laws are now set up towards ensuring that sooner or later, everyone will be in a DNA database, including many people never charged with any crime. Every baby born in a California hospital unwittingly adds another genetic profile to the ever expanding library of human lives. Those lives should be cherished, protected and seen as much more than just profiles and statistics.