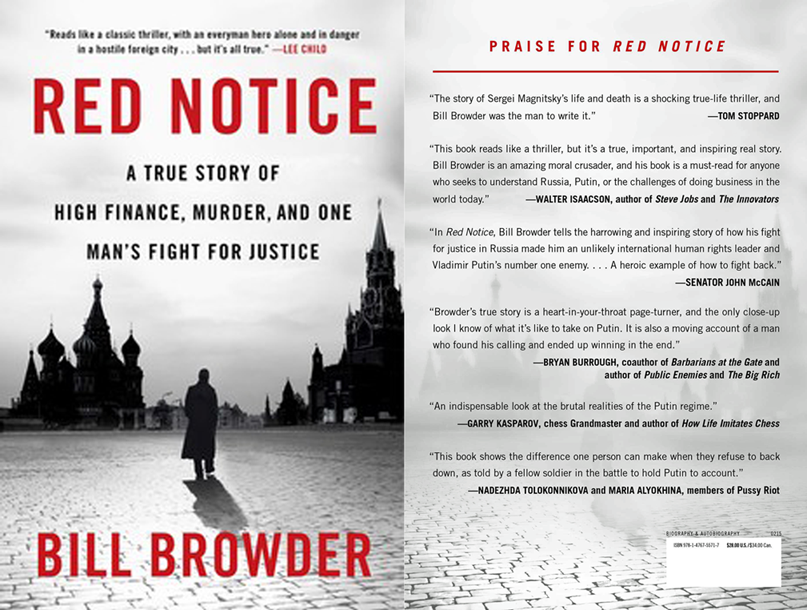 The timing of Bill Browder’s new book, “Red Notice,” is quite impeccable. After years of craven appeasement, the West finally realized the failure of its “reset” policies with Russia. “Red Notice” provides a powerful glimpse of what’s been taking place in Putin’s Russia, while the world looked the other way.

As the hedge fund manager, Browder was hugely successful with Hermitage Capital Management, a company he founded in Russia in 1996. It became the largest investment fund in the country. Browder was the prime example of succeeding the right way – without chicanery, fraud or embezzlement. This was the surefire way of irritating corrupt Russian elites. Big business and big government in Russia are intrinsically intertwined, brazenly operating as organized crime. Vladimir Putin is the Godfather of this far-reaching mafia family. He empowered the group of his cronies to enrich themselves at the expense of Russian economy, on the backs of the country’s long-suffering people. Resounding success of Bill Browder’s company, combined with his efforts to expose and uproot corruption, brought on the ire of the Kremlin gangsters.

In a brazen conspiracy, Russian authorities stole Browder’s companies, prevented him from re-entering the country, applied for and received a $230 million tax refund for the monies paid by his fund’s companies to the Russian government. Having declared Browder a “threat to national security,” Russian authorities shamelessly helped themselves to the largest tax refund in Russian history, which was paid out the next day after being requested – no questions asked.

While Bill Browder was banned from re-entering Russia, his attorney Sergei Magnitsky bravely continued the quest against corruption from within. After he untangled the complex fraud and testified against the officials involved, he was prosecuted by the perpetrators. For over a year, the principled 37-year-old was tortured, but refused to withdraw or change his testimony. Finally, on November 16, 2009, Sergei Magnitsky was handcuffed to a bedrail and brutally clubbed to death with rubber batons. Eight prison guards in full riot gear participated in the execution. Putin disingenuously claimed that “there was no malicious intent or criminal negligence in Magnitsky’s death.” Russia’s Godfather infamously responded to questions about the Kursk submarine tragedy by coldly stating: “It drowned.” He similarly responded to the inquiries about Sergei Magnitsky’s demise by saying: “He died.”

Bill Browder vowed to avenge the death of his honorable attorney. He pushed for travel and financial sanctions against the Russian officials who were involved in Magnitsky’s imprisonment, torture and death. Overcoming DC’s initial reluctance, Browder achieved the passing of the Sergei Magnitsky Rule of Law Accountability Act in Dec. 2012. The European Parliament followed suit, without a single objection. Browder is now pushing for a global version of the Magnitsky Act, to hold human rights abusers accountable worldwide.

Russian authorities retaliated by initiating a posthumous prosecution of Sergei Magnitsky for alleged tax crimes in 2013, years after his death. It was the first post-mortem trial in Russia’s history. Bill Browder was convicted of the same ludicrous charges in absentia. Russia’s show trials against truth-tellers and whistleblowers are notoriously common. Putin’s government took their retaliation out on additional innocent victims, by halting American adoptions of Russian children. In the meantime, officials sanctioned under the Magnitsky Act were promoted in Russia. The judge in the show-trial against Bill Browder and the deceased Magnitsky was himself on the U.S. sanctions list. “Red Notice” aptly describes Russia as a place “where lies reign supreme … A place where an innocent man who was murdered by the state, a man whose only crime was loving his country too much, can be made to suffer from beyond a grave. This is Russia today.”

Putin is still not done with Bill Browder, his Enemy No. 1, since he managed to expose the Achilles heel of Russia’s mafia kleptocracy. Because of Browder’s activism, stolen billions of Russia’s reigning elites, which are being kept in the West, can be located and frozen. The Russian government has made repeated attempts to place the fearless justice-seeker on Interpol’s “Red Notice” list, seeking to extradite Browder to Russia as an alleged “fugitive.” He is receiving numerous death threats. As the book recounts, the Prime Minister of Russia Dmitry Medvedev said during an off-the-record briefing: “Yes, it is a shame that Sergei Magnitsky died, and Bill Browder is running free and alive.”

Undeterred and unafraid, Bill Browder continues his pursuit of justice, as a lasting, powerful tribute to Sergei Magnitsky, who sacrificed his life in the name of truth and honor. “Red Notice” is an inspiring tale of confronting true evil and battling corrupt giants, against all odds. Bill Browder writes, “If finding a ten bagger in the stock market was a highlight of my life before, there is no feeling as satisfying as getting some measure of justice in a highly unjust world.”