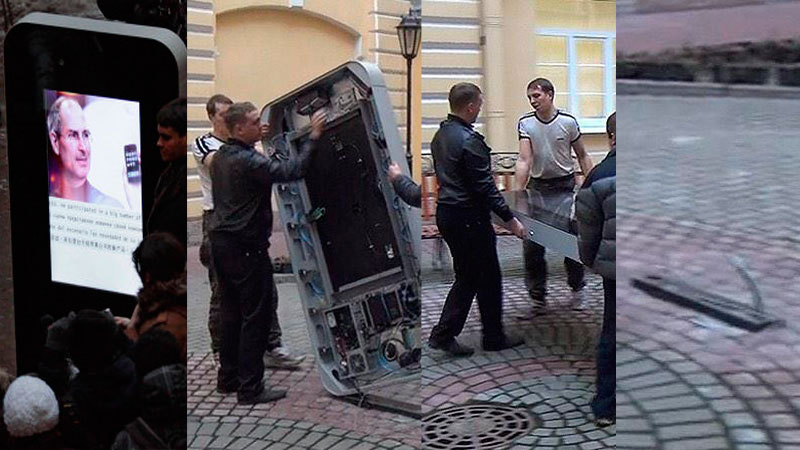 A memorial to Apple founder Steve Jobs has been dismantled in St Petersburg, Russia, because his successor, Tim Cook, recently came out as being gay. The monument in the shape of an iPhone is over six feet tall. It features an interactive screen with photos, videos and text about Jobs, Apple’s late co-founder. The memorial was erected in January 2013 by a Russian group of companies called ZEFS (West European Financial Union).

On November 3, 2014, ZEFS released a statement that the memorial had been removed on Friday to combat “gay propaganda.” The monument was taken down the very next day after Apple CEO Cook had announced he was homosexual.

“In Russia, gay propaganda and other sexual perversions among minors are prohibited by law,” ZEFS commented, pointing out that the memorial had been “in an area of direct access for young students and scholars”.

“After Apple CEO Tim Cook publicly called for sodomy, the monument was taken down to abide to the Russian federal law protecting children from information promoting denial of traditional family values,” ZEFS added.

Cook said he had decided to come out to help move forward civil rights. Steve Jobs, who died in 2011, was not gay.

Vitaly Milonov, a St Petersburg legislator who has campaigned against gay rights and was among legislators leading the effort behind the law against “gay propaganda,” signed by Putin, has called for Apple’s CEO to be barred entrance to Russia. Milonov exclaimed that Cook should be banned from Russia, because he could bring AIDS, Ebola, or gonorrhea into the country.

It’s unclear how the monument of an IPhone could be considered “gay propaganda.” Russia remains the land of the absurd, where the rights of minorities are disregarded and personal liberties are harshly limited by the authoritarian government.