This week’s abhorrent terror attacks in France outraged people around the world, prompting them to rally in defiance against those behind this attack on free speech. Twitter was ablaze with more than 5 million Tweets bearing #JeSuisCharlie hashtag, with some glaring exceptions. Chief among them is Russia, where the hashtag clearly didn’t catch on. The issue, however, goes much deeper. Russian politicians, religious organizations and public figures largely blamed the victims of the attack for having brought these acts upon themselves.

Russia’s Council of Muftis condemned the terrorist acts, but encouraged self-censorship, asserting that “the sin of provocation” is just as dangerous as the sin of those who respond to the provocation. 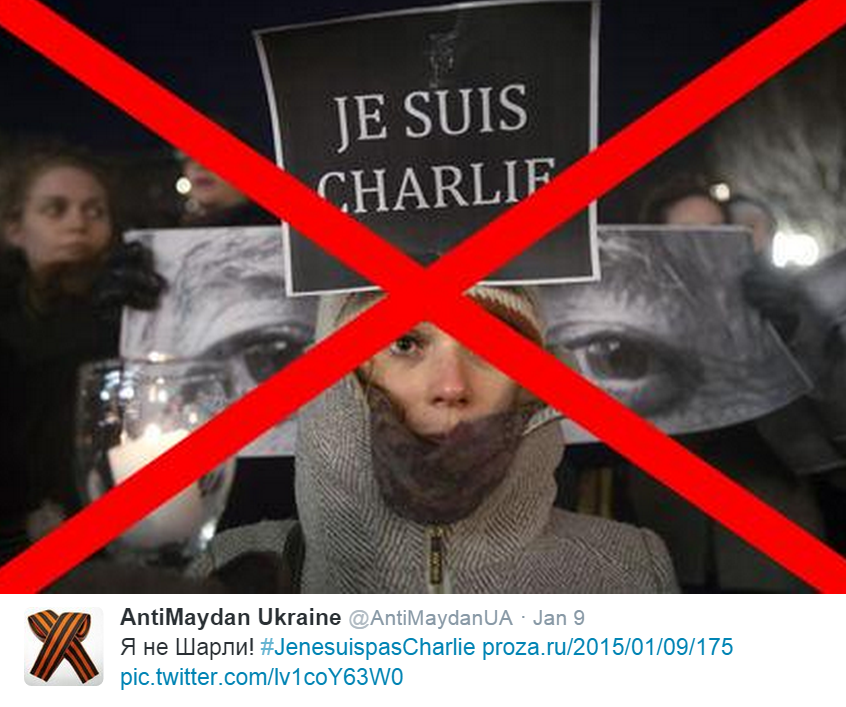 Komsomolskaya Pravda questioned whether the journalists were responsible for their own deaths, pondering that the sin of the person who expresses certain thoughts and the sin of the person who kills him for it, might be equal. In that sense, the press faces the choice of censorship to avoid bigger problems. The same newspaper’s writer Alexander Grishin said that he feels no solidarity with the French caricaturists or the European government. Grishin accuses those who sympathize with the victims of hypocrisy and states that while Salman Rushdie may deserve solidarity, Pussy Riot (with which he aligns Charlie Hebdo) does not.

Alexander Prokhanov, Russian writer and political activist who received the plethora of government awards, wrote: “Journalists, caricaturists have created a provocation. The possibility of the following incident was predictable by known events related to insulting of the sanctities, specifically, of the Islamic world. Something similar happened in Russia, when icons were destroyed or Pussy Riot danced at the altar. Does the freedom mean the freedom to defile? This is a huge problem of the modern European culture.”

Russian politician, writer and a social commentator Eduard Limonov said: “12 corpses as a punishment for amoral baseness. Oh well! By the way, what happened in France is a lesson and a warning for the “creative class,” that it is dangerous to insult the beliefs of the people. I don’t mean only religious beliefs. In Russia this may also happen any day now. Ultraliberal mainstream media shouldn’t be surprised if, after so many years of insults against Russian people, their nerves will finally give way.”

The Russian Orthodox group, known for asserting that “God is inside Vladimir Putin. A divine light transfixed Putin’s essence after his secret baptism as a child. We are not worthy of the Russian president,” led a picket outside the French Embassy. The group blamed the French government for the attack, accusing them of failing to defend “the feelings of believers.” The group’s leader, Dmitry Tsorionov, is known for his hardline Orthodox activism under the pseudonym “Enteo.” He previously referred to Russia’s President as “a living temple” and said that “God has been placed inside this little Vladimir Putin. This is a fact.” Tsorionov posted, then deleted a Tweet that said, “The dogs that were killed in France deserved it, it was just. These devils made fun not just of Islam but also of Christ.”

Another stance that is, predictably, prevalent amongst Russia’s politicians and talking heads, blames the United States for the terrorist acts in question. Russian politicians are unwilling to address the terrorist attacks in depth, because of the terrorist activities in Ukraine that are fueled, funded and directed by Russia. Terrorist bombings are now commonplace in Ukraine, a peaceful country which hadn’t seen any armed conflict since World War II. In its urge to restore the USSR in all of it totalitarian glory, Russian leadership follows in the footsteps of its Soviet predecessors, who sponsored and supported various terrorist groups, such as the PLO, the Sandinistas in Nicaragua, the African National Congress in South Africa and anti-American forces in Afghanistan. It should be noted that Omar al-Shishani (Tarkhan Tayumurazovich Batirashvili), the military chief of ISIL (also known as ISIS or the Islamic State), was born in the Soviet Union and trained in Russia.

The deputy chief editor of independent radio station Ekho Moskvy, Vladimir Varfolomeyev, said that Russians were deeply split in their reaction to the terrorist attack in Paris. “Among my acquaintances, those who do not condemn the attack against the magazine are pretty much the same people with whom we have always argued about Putin, Crimea, Donbass and so on … Today there is an abyss between us.”