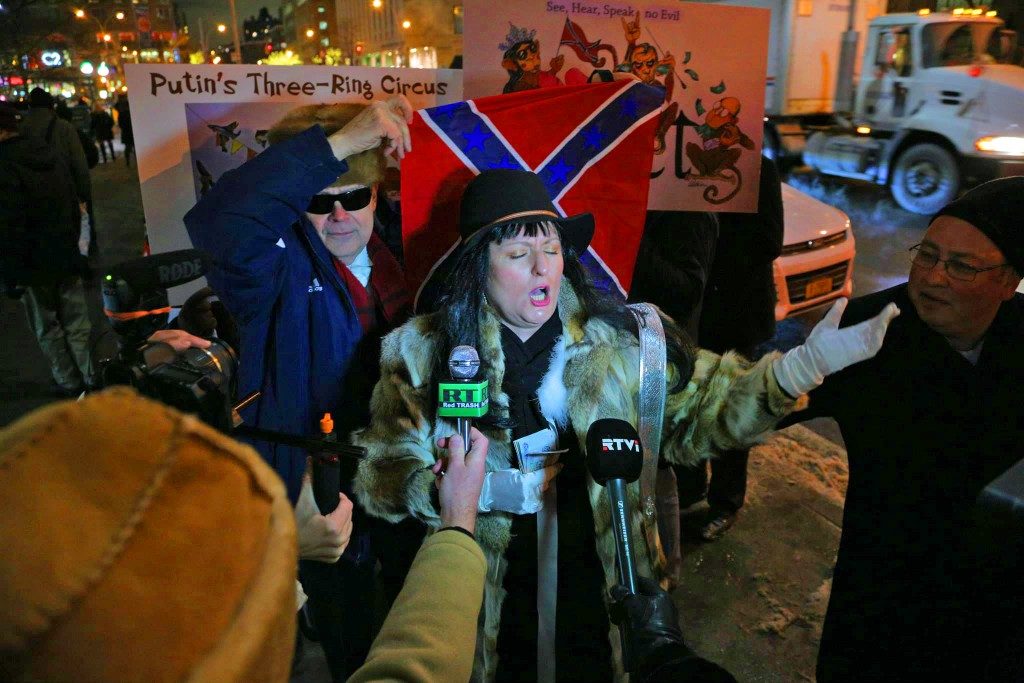 The recent performance of “Iolanta” at the Met was outshined by the high-spirited protests, accompanying Russian Conductor Valery Gergiev’s and opera singer Anna Netrebko’s performances in the West. Mariinsky theater musicians callously asked protesting Ukrainian artists: “When will you all die already [expletive]?” and exclaimed “Alaska will also be ours!” (play on words for the Russia’s distasteful annexation slogan, “Crimea is ours!”) Undeterred, protesters put on quite a show, inside and outside of the Met. Dressed in colorful costumes, they reenacted Anna Netrebko’s ill-fated donation to the sanctioned separatist leader, Oleg Tsarov.

While the protesters’ musical act and a political message was a resounding success, critics lambasted Gergiev’s barely-rehearsed productions. They were also far from impressed with Netrebko’s waning vocal chops. A review of “Iolanta” bemoaned her poor performance: “Maybe it’s sentimentality that’s kept this role in Netrebko’s repertoire, because at this point in her career neither her voice nor her stage appearance really suit the role of the sheltered, blind princess. Netrebko’s now rather mature looking and what’s more, acts mature. The youthful ebullience is no longer really there … Her voice has also changed. She always had a dark, rich timbre, but in this rather lyrical role one noticed a thickness to her voice that sounded matronly. It had a slight but persistent beat on sustained notes. Her pitch sagged. What was most surprising was how often she seemed to be pushing … Tonight in the duet with Vaudémont (Beczala) and in the final wedding chorus she was hunched over, fists balled, screaming … I’ve heard her in almost everything she’s ever sung at the Met and she’s never sounded this bad.”

Gergiev shared the ire, with the review that noted: “Gergiev has remarkably little feel for Tchaikovsky’s music. This is as much of a problem in the “Nutcracker” recording of his as “Iolanta.” He has a cold clinical style, which is absolutely against the grain of Tchaikovsky’s melodies. The final wedding chorus fizzled out to the point where when the curtain fell there was little to no applause.”

The conclusion of the dull performance was spiced up by Roman Torgovitsky – founder/CEO of Wounded Warrior Ukraine. He calmly walked up on stage, holding a poster depicting Putin as Hitler, alongside Gergiev and Netrebko. Roman was arrested, but charges of trespass against him were dismissed. Last year, Torgovitsky had also gone onto the stage of the Sanders Theater at Harvard during a performance by the Russian violinist Vladimir Spivakov, who had signed a letter endorsing Vladimir Putin’s egregious actions in Ukraine. Gergiev signed the same letter. Netrebko, whose close ties to Putin have long been questioned, scandalously posed with terrorist leader Oleg Tsarov, after handing him a check for one million rubles. Tsarov is wanted by the Ukrainian government on charges of separatism and is also on the list of individuals sanctioned by the EU for their role in events in Eastern Ukraine. Tsarov was also sanctioned by the United States as a person who poses a threat to national security.

Famed pianist Andrei Gavrilov poignantly said: “There is strong opinion among people of good will – not to mix arts and politics. It is a fully legitimate sentiment, while artists working under totalitarian regimes suffer a lot just being an artist – representative of freedom, beauty and love. The other case is when artists actively support tyranny for financial, commercial, career benefit – it is unforgivable from the moral point of view. The most dangerous, evil and distractive for arts and people around the world is when artists become a weapon of manipulation of the public mind, using their talents. In this case, artist willfully works as a distractive criminal power, killing the purpose of art and turning the world audiences into manipulative puppets, promoting gangster-like regimes, using power of art. Individuals like Matsuev, Gergiev, Bashmet, Netrebko, Spivakov, Hvorostovsky, constantly perform in the West, poisoning hearts and minds of their audiences, whom they don’t respect, hate, laugh at, help to destroy, by actively supporting neo-fascist Putin’s regime. They travel to the West, promoting their careers, acquiring wealth, while at the same time cynically ruining western values and culture, politically and artistically misleading great numbers of innocent people.”

U.S. performances featuring Gergiev and Netrebko were sponsored by multiple entities, including two sanctioned Russian banks: Sberbank and VTB. The Brooklyn Academy of Music (BAM) listed Russia’s Sberbank and VTB as its principal partners in the recent production of “The Enchanted Wanderer.”Sponsors and supporters of the Brooklyn Academy of Music include the following:

Sponsors of the Met include the following:

Mariinsky theatre’s performances of “Iolanta” and “Bluebeard’s Castle” at the Metropolitan Opera werefunded through the number of sources, including the National Endowment for Arts. American taxpayers unwittingly shelled out $85,000 to support the fans of Russian aggression in Ukraine. Taxpayers are also losing millions, subsidizing tax loopholes for BAM and the Met, both of which hold 501(c)(3) status and are exempt from federal income taxes. In 2013, the Met received $157.9 million in contributions, bequests, and other development revenues, including funding from the National Endowment for the Arts.BAM received taxpayers’ funds from the New York State Council on the Arts, and the New York City Department of Cultural Affairs. Taxpayers should not be asked to subsidize organizations sponsored by sanctioned foreign banks and promoting Russia’s terrorist activities in Ukraine. These activities appear to be inconsistent with the tax-exempt status of BAM and the Met.