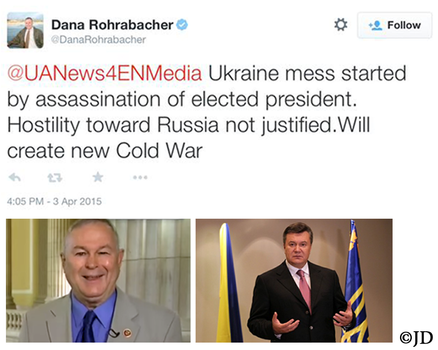 California Congressman Dana Rohrabacher (R) stunned fellow Twitter users last Friday by claiming that all of Ukraine’s problems stem from “assassination of elected president” Viktor Yanukovych. This stupefying Tweet was made in response to another user (@UANews4ENMedia), who posted an article entitled “Putin Bootlickers Assemble in D.C.” The article aptly wiped the floor with a slew of Putinsupporters in the West, including Congressman Rohrabacher, who obviously felt the need to discuss the topic on social media.

Astonished Twitter users questioned Rohrabacher about the reasons behind his obviously false statement. Vodka, peyote, pot, hacked account and incompetent interns were among suspected reasons for the public flub. After all, it was difficult to fathom that such a glaring misrepresentation could be made by a Congressman who is serving his 13th term, while also heading the Europe, Eurasia, and Emerging Threats Subcommittee of the House Foreign Affairs Committee, as Chairman. Erasing all doubt, Congressman Rohrabacher retorted that he runs his Twitter account personally and flat out lied about making the assassination remark altogether. He denied using the word “assassinate” with respect to the fate of Yanukovych and accused pro-Ukrainians of dishonesty for suggesting that he did.

Rohrabacher eventually admitted to making the claim that Yanukovych was assassinated, but called it a mistake he was not aware of. In other Tweets, Congressman Rohrabacher eagerly consented to being interviewed by RT (formerly Russia Today) and said that he is planning to travel to Moscow during the next few weeks. He never retracted his blatantly false public statement and ignored subsequent media inquiries from the Examiner. Congressman Rohrabacher’s propensity for reciting the Kremlin’s talking points makes the reasons for his travel to Russia and the source of funding for the said trip all the more relevant.

This is not the first time Congressman Rohrabacher publicly embarrassed himself. He infamously pledged to defund “white trash,” supported the group that later became known as the Taliban, reportedly referred to Mexican immigrants as “wetbacks” and called for legislation that would ban hospital emergency room doctors from treating seriously injured undocumented immigrants. Rohrabacher is a zealous supporter of torture, firmly believing that it’s limited to placing a woman’s panties on the alleged terrorist’s head. Rohrabacher – Vice Chairman of the Science, Space and Technology Committee – infamously suggested that climate change may have been caused by ‘dinosaur flatulence’ and asserted that clear-cutting the world’s rain forests might eliminate the production of greenhouse gases.

The rambling Congressman flippantly suggested that Iraqis repay the U.S. for invading their country and demanded that the rebels in Libya reimburse the US “for the cost of the anti-Gaddafi campaign.” Rohrabacher’s ignorance, combined with his belligerent support for Russia’s aggression against its neighboring countries, make him a danger not only to our rain forests, but also to world peace.

Over the years, Rohrabacher surrounded himself with a motley crew of convicted felons and scallywags, including former OC Sheriff Mike Carona, former Huntington Beach Mayor Dave Garofalo, former corporate lobbyist Jack Abramoff, con artist Joseph Medawar, Rohrabacher’s wife Rhonda who pleaded guilty to election fraud and subsequently became Rohrabacher’s campaign manager, as well as his former Congressional aide Jeffrey Ray Nielsen, who was convicted of molesting boys while serving as Rohrabacher’s aide in Washington, D.C. Given this lineup of rogues, Rohrabacher’s support for Putin is not quite as surprising. After all, he knows how to pick’em.