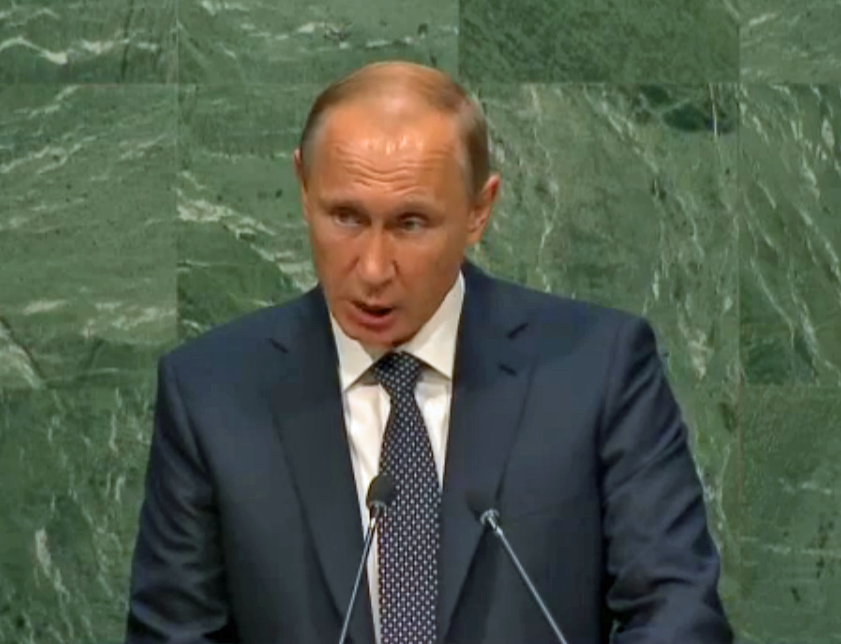 On September 28, 2015 Russian President Vladimir Putin took the stage at the UN General Assembly for the first time in a decade. “Putin Speech Bingo” successfully predicted many of the Russian leader’stalking points. As expected, the speech was replete with innuendos, historical references and outright falsehoods.

Putin claimed that the original purpose of the UN has been violated by “those that found themselves at the top of the pyramid” after the Cold War. “They thought they knew better and thought they did not have to reckon with the UN to legitimize their decisions,” Putin added. This innuendo was undoubtedly directed at the U.S. What Putin conveniently omitted is the fact that Russia’s military interventions in Chechnya, as well as its invasions/annexations of parts of Georgia and Moldova, were undertaken without seeking UN resolutions. In fact, Russia voted against the UN resolution that sought to investigate egregious human rights violations committed by Russia in Chechnya. Russia also vetoed a U.N. resolution authorizing the continued presence of U.N. peacekeepers in Georgia. While extolling the importance of the UN, Russia consistently vetoed resolutions attempting to find solutions for frozen conflicts in the former Soviet space.

Predictably, Putin mentioned WWII and Hitler in his speech before the UN. He called for a “genuinely broad alliance against terrorism, just like the one against Hitler.” This comparison rings hollow, as Russia continues to arm, aid and abet terrorist elements in Ukraine, covertly supplanting them with Russian armed forces and sophisticated armaments. It was also reported that “Russian special services have controlled” the flow of jihadists into Syria, where they have lately joined up not only with ISIS but other radical Islamist factions. It is estimated that the current composition of ISIS includes approximately 25% of participants from Russia.

“Of course, the world is changing. The UN must be consistent with this natural transformation. Russia stands ready,” Putin said. However, it seems that Russia “stands ready” mainly to veto resolutions in order to avoid accountability for its own actions.

As expected, Putin continued to justify propping up the Assad regime, by stating: “We think it is an enormous mistake to not cooperate with the Syrian government and its armed forces. No one but Assad’s armed forces and the Kurdish militias are truly fighting ISIS and other terrorists in Syria.” In reality, by supporting Assad, Russia is actually facilitating the expansion of ISIS. The Syrian regime engages in state terrorism against its own people, thus inciting terrorist elements created in opposition to Assad.

Putin continued his speech by calling for the creation of a “genuinely broad international coalition” to combat ISIS. He conveniently failed to mention that such a coalition already exists. It includes the U.S., Canada, Great Britain, France, the United Arab Emirates, Qatar, Australia, Germany, France, the Netherlands, Saudi Arabia, Turkey, Jordan, Egypt and other nations. Nonetheless, Putin claimed that “no-one except for Assad and his militia is truly fighting ISIS in Syria.” Instead of offering to join the existing coalition, Putin is calling for the creation of a new one, led by Russia. Russia had recently reached a deal with Iraq, Syria, and Iran to begin sharing “security and intelligence” information about ISIS. Putin said that ISIS “desecrates one of the world’s greatest religions by its bloody crimes” to “make a mockery of Islam and pervert its true humanistic values.” Therefore, Putin asserted that “Muslim countries are to play a key role in the coalition” which would be “similar to the anti-Hitler coalition.” Russia undoubtedly seeks to expand its influence and active participation in the Middle East. It appears that Iran, Syria and Russia’s main objective is not to defeat ISIS, but rather to exploit Western fears to their own advantage.

Putin proceeded to complain about sanctions imposed against Russia “by a small group of players” because of its actions in Ukraine. He claimed that “The rules of the game are being constantly rewritten by a small group of players.” Putin didn’t specify which “rules of the game” were being “re-written” and by whom. Putin complained that the U.S. emerged as “a single centre of domination” that seeks to export “so-called democratic revolutions,” which he blamed for “violence, poverty and social disaster” all over the world.

With respect to Ukraine, Putin claimed that a “military coup” triggered a “civil war.” In reality, there was no “military coup” – instead, former President Yanukovych (aided by Putin) abdicated his position and moved to Russia. Putin previously confirmed: “I will say it openly – he asked to be driven away to Russia, which we did.” Ukrainian military was not involved in the popular uprising. To initiate the annexation of Crimea,Russian President gave orders to the Defense Ministry to “deploy the special forces of the GRU, together with marine forces and paratroopers.” It should be noted that at the annual G-20 summit in Australia, when the prime minister of Canada told Putin to get his country’s troops out of Ukraine, Putin responded, “Unfortunately, this cannot be done, as we are not there.” He infamously claimed that the “little green men” in Crimea were simply locals who purchased Russian uniforms from a shop. Similarly, Putin’s claims that events in Eastern Ukraine are merely a “civil war” have already been repeatedly debunked.

In short, Putin’s speech at the UN delivered plenty of blame and false narratives, but offered no real solutions.