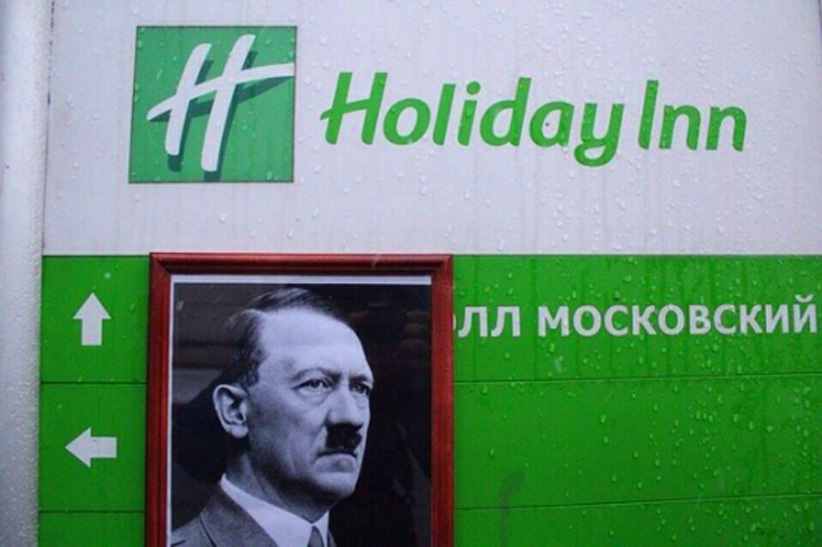 Having hosted a gathering of Neo-Nazis and fascists in St. Petersburg, Russia, Holiday Inn received a portrait of Adolf Hitler from outraged activists. Member of the group RPR-Parnassus Andrey Zaretsky commented: “In our opinion, this terrible dictator and murderer of millions of people personifies the administration of this hotel, since they not only allowed entry to self-proclaimed fascists, but also aided in the arrests of those who came to protest their actions. Moreover, in December, the administration of the same hotel actively helped to disrupt the conference of Mikhail Khodorkovsky, “Open Russia,” drowning out the sound with their loud music and sirens. In our organization’s opinion, this behavior is unacceptable. Our goal is to demonstrate to Russian society that the youth objects to the actions of people who allow the return of fascism. 70 years ago, our ancestors did not surrender the city to the Nazis. And we also won’t give it up!”

Propaganda of fascism is legally prohibited in Russia. In direct contravention with the country’s official stance, Putin is courting marginal, far-right, ultra-radical organizations in Europe and the U.S. According to his warped logic, any enemies of Russia’s opponents can be recruited to sow unrest and dissent in their home countries. Along with Neo-Nazis, fascists and at least one convicted member of a terrorist organization, the forum hosted Nathan Smith, one of the leaders of the Texas Nationalist Movement. He was invited by the Kremlin-backed Anti-Globalist Movement of Russia. Smith said that his goal was to meet like-minded individuals who cherish the same values. While Russia actively supports and sometimes artificially foments separatist movements in other countries, separatism is illegal in Russia. Any Russian groups that seek independence from Moscow are designated as terrorist organizations and face serious consequences.

Other guests and speakers of the forum included:

[UPDATE] InterContinental Hotels Group (IHG) representative Tim Rycroft commented: “Holiday Inn St Petersburg – Moskovskye Vorota hosts hundreds of meetings each year. The hotel’s meeting and conference facilities are available to be booked by all lawful organisations and the hotel extends its hospitality equally to all its guests. In accepting bookings, Holiday Inn does not endorse or condone any organisation, sentiment or individual.”