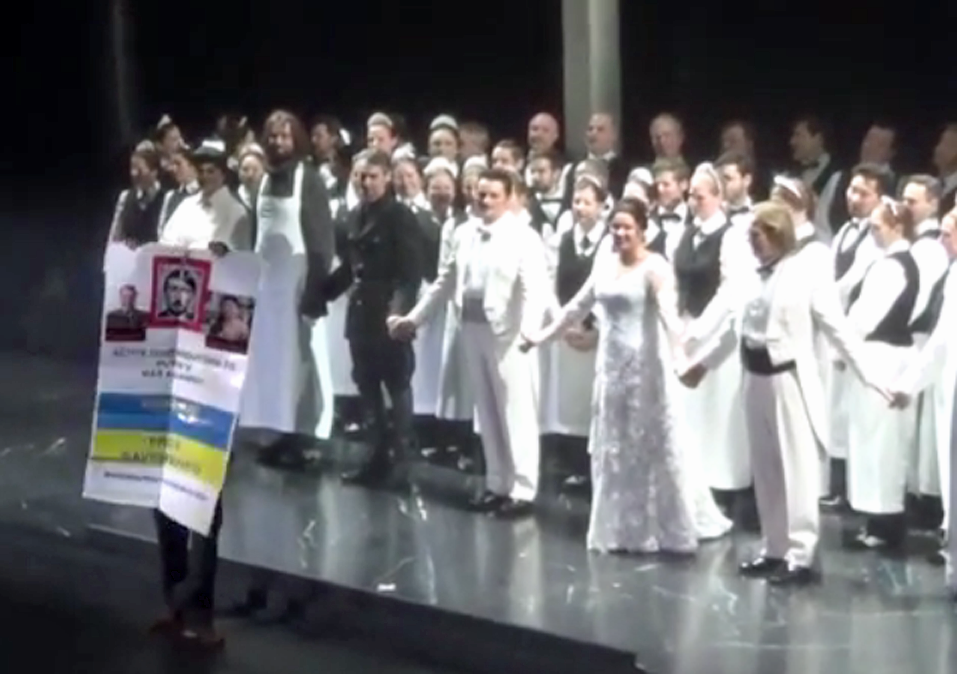 On December 16, 2014, President Obama signaled his intent to sign newly passed legislation that will expand sanctions against Russia and provide $350 million in arms and military equipment to Ukraine, as it continues to battle terrorist elements armed and empowered by Russia in eastern regions of Ukraine. “The president does intend to sign the piece of legislation that was passed by Congress,” said Josh Earnest, the White House press secretary.” Analysts opined that President Obama had little choice but to sign the legislation, in light of Putin’s outright aggression. Russia has continued to violate the terms of a Minsk agreement by providing military and material support to the terrorists/separatists in Ukraine. Obama is expected to sign the new legislation by the end of this week.

On November 17, 2014, the Metropolitan Opera finally responded to an inquiry about their upcoming opera performances starring Anna Netrebko – opera singer who landed herself in hot water, when she held up the flag of nonexistent “Novorossiya” and posed with terrorist leader, Oleg Tsarov, after handing him a check for 1 million rubles. Netrebko attempted to downplay the event, by claiming that she didn’t realize what the flag symbolized or who Tsarov was. He is the self-appointed leader of the nonexistent terrorist republic “Novorossiya,” the would-be country that Russia-armed insurgents intend to carve out of Ukrainian land. Tsarov is wanted by the Ukrainian government on charges of separatism and is also on the list of individuals sanctioned by the EU for their role in events in Eastern Ukraine. President of Ukraine Petro Poroshenko stated: “Those armed in Eastern Ukraine should not be referred to as “separatists.” There are no separatists there. They are terrorists.”

Terrorist leader Tsarov rebutted Netrebko’s denials, elaborating that all of the details (including the flag ceremony) were thoroughly planned out weeks in advance. Many question whether Netrebko’s dress was selected to match the colors of the terrorists’ flag. Netrebko is a citizen of Russia, who recently acquired dual citizenship in Austria. Her actions were sharply criticized by the Austrian Foreign Ministry, whose spokesman said: “It‘s problematic to get yourself photographed with an eastern Ukrainian separatist and his flag. It‘s clear that such photos will be immediately be misused for propaganda purposes.”

Unperturbed by Netrebko’s activities, the Metropolitan Opera representatives stated: “As an artistic institution that believes in freedom of expression, the Met does not have to be in agreement with the personal views of the artists who perform on its stage. We support Ms. Netrebko as one of the world’s leading opera singers and we are proud that she sings at the Met.” In October 2014, the Metropolitan Opera faced accusations of supporting terrorism with respect to the performance of John Adams’s “The Death of Klinghoffer.” Political figures, including former New York City Mayor Rudolph W. Giuliani, joined a rally to denounce an opera that was seen by many as anti-Semitic and pro-terrorist. In spite of the protests, the Metropolitan Opera forged on with the performance. Netrebko’s singing career is not in jeopardy, in spite of her affiliation with Russia-funded terror in Ukraine, or with the President of Russia himself.

As a close friend and supporter of the Russian President, Vladimir Putin, Anna Netrebko tends to champion his pet causes. She was forced to cancel her appearance at the Vienna Opera ball amidst fierce criticism of her sworn endorsement of Putin’s presidential campaign. Netrebko was rumored to be Putin’s lover and told the Newsweek, “I’d have loved to have been … He’s a very attractive man.” Aiding Putin’s propaganda machine, Netrebko sang at the opening of the Sochi Olympic Games, and went on to hobnob with the terrorists responsible for the bloody unrest in Ukraine. Netrebko is not afraid to be aligned with the bad guys, nor concerned with looking like one. When she was asked about the challenges of playing Lady Macbeth, Anna Netrebko quipped: “Surprising as it may seem, this negative character fit me like a glove – I was finally able to be myself onstage.”

Netrebko’s donation was supposed to go towards the restoration of the Donetsk Opera Theatre. Since the theatre was not damaged during the ongoing hostilities between the terrorists and the military of Ukraine, the funds will be used to pay the salaries of local theatre performers. So far, the theatre received only the certificate and not the money, which is being rapidly devalued in the ongoing ruble freefall. The donation is now worth less than $17,000 and may not do much to ease the suffering in Eastern Ukraine. It succeeded only as another shameless tool of Russian propaganda.