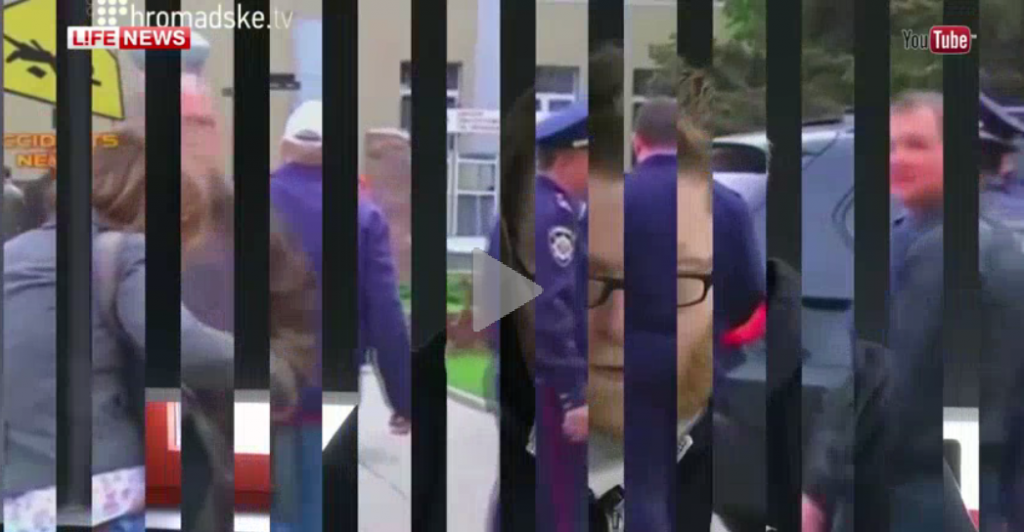 Russia’s mainstream media exploded with a stream of articles and TV programs, claiming that Ukrainian journalist Bogdan Butkevych called for the murder of 1.5 million people in Donbass, Eastern Ukraine.

Not to be outdone, Komsomolskaya Pravda went an extra mile, pulling a screenshot from an entirely different video to create the false impression that Bogdan Butkevych made a Nazi hand gesture salute. They drew parallels to the 1930’s Germany, stating that Butkevych proposed that the people of Donbass be dealt with in the barbaric way.

Moskovskiy Komsomoletz didn’t stop at that allegation, adding that Bogdan Butkevych was “illuminating the strategy of the Ukrainian government”

Russian television program “Time” on Channel One did its best to draw the same parallels. Channel One mused about the latest developments in the Ukrainian Parliament (Verkhovna Rada), then unsuccessfully attempted to solicit commentary from MP Oleg Lyashko, who said he would be interviewed only by real journalists and not Goebbels-type propagandists. The very next cut showcased Bogdan Butkevych, introduced by Channel One as a “Kyiv journalist and a Nazi.” Channel One also expressed its shock about the host not interrupting his alleged “fascist” call to genocide.

In fact, such a statement would be considered extremely offensive – if only it was real. It was re-cut, edited to create a false impression as to what Butkevych actually said. The fact that the video in question was crudely spliced together won’t come as a surprise to anyone who’s been following the barrage of fake news, reported by Russia’s government-funded mainstream media. Kremlin’s massive propaganda apparatus doesn’t think twice before reporting made-up stories about crucified babies and corpses that rise up to go into battle. Russian agitprop does not shy away from using photos and video of Russia’s own atrocities in news reports about current events in Ukraine.

In this instance, Bogdan Butkevych first discussed the high rate of unemployment in Donbass. He opined that unemployment in this highly populated area caused large numbers of people to have trouble with finding their place in society. This portion of the interview was spliced together with the bit where Butkevych discussed the need to decisively deal with terrorists in Eastern Ukraine. Pointing out that attempted negotiations were rejected by the armed thugs, Butkevych summed up that there is a certain category of people that can be dealt with only by being killed.

The re-editing, splicing, cut and paste of this video was quite inept and obvious to the naked eye. Russian news agencies knew or should have known they were running a blatantly false piece of propaganda.

In an exclusive interview with the Examiner, Bogdan Butkevych provided his take on the Kremlin media’s fake propaganda piece that shamelessly twisted the context of his words. His first reaction was, understandably, “shock and concern.” Butkevych said, “It was very troublesome to see how manipulative lies that twisted my words were spreading at the speed of light. The fact that it was done by some of my so-called colleagues, fellow journalists, was especially unsettling. After my own investigation, I am convinced that this ploy directly involves a well-known Ukrainian spin doctor, who works for the administration of the President of the Russian Federation. I believe he received a request for a hit peace to propagate the theme of alleged Nazism in Ukraine.”

Butkevych further remarked that the original interview lasted for over 30 minutes and was broadcast on Ukraine’s Hromadske TV on April 29, 2014. The fake montage was created in June of 2014, but received widespread media coverage only recently. It also spread like wildfire across Russian and international social media networks. Bogdan Butkevych believes that the timing of this anti-Ukrainian crusade is further proof of its centralized nature. He said, “This smear campaign intends to further destabilize the situation in Ukraine. One of its elements involves systematic attempts to discredit journalists, activists and public figures. Another important detail is that Russia’s propaganda campaign in Donbass is obviously failing. They’re grasping at straws, attempting to present some kind of proof of its own tired stereotypes of “junta,” “Nazis” and such. This propaganda is directed towards the people of Donbass and intended to make them fear phantom “Nazis,” who allegedly issue open calls for their mass extermination.”

This piece of Russian propaganda is one of many elements of Kremlin’s information war against Ukraine. Russia’s spin masters have no qualms about deceiving the public and show utter disregard for the safety and well-being of the journalist used as a prop in their dirty game. Bogdan Butkevych is now receiving hundreds of death threats on a daily basis. He says, “I’m not afraid, because the truth is on my side. Truth always wins over the most elaborate fabrications of the Kremlin clique.”

Butkevych has many friends in Donbass, having traveled there often for 6 years in a row. He bears no ill will towards the population of the beleaguered region. He said, “To the people of Donbass – of course I did not propose to kill any civilians, regardless of their views. I maintain my position that terrorists, who brought war, violence and destruction into the region, must be destroyed. My words were twisted by the conniving Russian propaganda. I wish peace, prosperity and strength to all the people of Donbass.”

Ironically, Bogdan Butkevych learned about this fake of Russian propaganda from his friends in Donetsk, the same day he returned from Eastern Ukraine. Butkevych, who is also a musician, was there to perform for the members of Ukrainian military. The crudely-edited video, he says, serves as a further reminder that Russian media cannot be taken at its word. It serves solely as the source of mass disinformation, being spread by obedient propagandists at the direction of their Kremlin handlers.

One might wonder why any rational human being would be willing to believe that Ukrainians are calling for genocide against their own people. The answer lies in the open calls for the murder of Ukrainians by Russia’s leading propagandists, such as Alexandr Dugin, who said that Ukrainians must be “killed, killed, killed.” Since Russia’s public figures openly encourage genocide during their media appearances, viewing audiences are willing to believe fabrications that falsely accuse Ukrainian luminaries of doing the same.