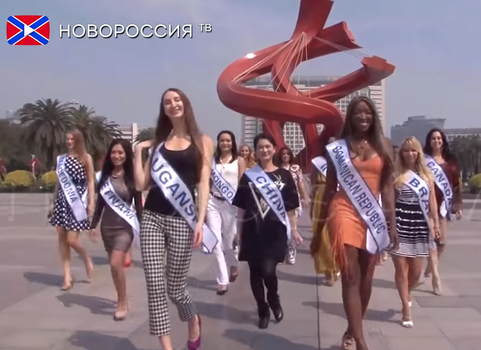 Obscure beauty competitions, Mrs. World and Mrs. America, continue to disregard American sanctions and international values. Both beauty pageants, headed by David Z. Marmel, keep showing their ugly side. In 2015, Mrs. America was planning to hold their event in occupied Crimea, which they lovingly described as “Sevastopol, Russia.” While the entire civilized world refused to accept Russia’s forceful annexation of Ukraine’s Crimea, David Marmel’s reaction could be summed up as “no biggie, we’re still doing it.”

Ignoring outrage from the international community (which was quite widespread, especially considering the pageant’s low public profile), Mrs. America insisted upon going to Crimea and calling it “Russia.” Alas, these inglorious plans fell through, together with the crashing Russian ruble. Mrs. America’s Office of the President released the following message:

Mrs America has, over the last 35 years, maintained and continues to maintain a reputation of integrity, prestige and innovation. This year’s pageant was all of that as we embarked on a repeat of a historical competition combining Mrs Russia with Mrs America as we did 25 years ago this year. Unfortunately the devalued Ruble to the Dollar has exacerbated the cost to double that in which they had originally committed for this event to move forward causing them to have to back out of this prodigious possibility.” (sic)

Instead of occupied Crimea, in 2015 Mrs. America was held in Las Vegas, Nevada. If you thought the controversy would end there, you’d be wrong. David Marmel managed to stir up more outrage in 2016 with his second pageant, Mrs. World. In spite of the contest’s own rules, Mrs. World accepted two participants from Ukraine. One of them (Valeria Bylinina) was selected to represent the self-proclaimed “Luhansk People’s Republic” (LPR) – an unauthorized entity, formed by Russian and pro-Russian terrorists/separatists in eastern Ukraine. Just like Crimea, LPR is on the U.S. Treasury’s list of sanctioned entities and is a part of Ukraine, not a separate country.

The Russian propaganda machine had a field day with this goldmine of an opportunity. Russia’s state-sponsored Vesti exclaimed that American pageant organizers effectively acknowledged the LPR’s legal status by allowing its representative to participate. Komsomolskaya Pravda remarked that David Marmel didn’t seem to care that the American government doesn’t recognize the LPR. TASS commentator speculated that the pageant must have had certain “ideas” in mind by allowing the city of Lugansk to compete. Bylinina didn’t win any titles, but said that she was happy to represent the self-proclaimed “republic” and its notorious flag. Mrs. World and Mrs. America, along with their tone-deaf leadership, fail to live up to the promise of “excellence, professionalism and the celebration of family values.” Instead, they deliver a noxious blend of arrogance and disrespect, unworthy of an American brand (however arcane it may be).