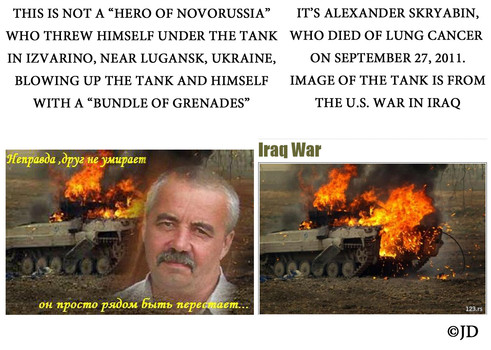 Russia’s propaganda war stooped to unimaginable lows with respect to its coverage of the events in Ukraine. Russian media used images and videos from Syria, Chechnya, Dagestan, Kabardino-Balkaria, Bosnia, India, China and Australia to illustrate alleged atrocities of the Ukrainian government. It claimed that Ukraine no longer exists as a country (including statements to this effect by the head of Russia Today (RT) Margarita Simonyan), labeling its territory as mystical “Novorussia.” It declared Ukrainian people to be the “occupants” on their own land and actively recruited mercenaries to fight against the military of Ukraine.

Russian mainstream media shamelessly claimed that Ukrainian military “harvests organs” from living people, that Ukrainian government is building “concentration camps” and imprisoning all healthy males on the territories that have been recently freed from Russia-sponsored terrorist/separatist forces.
This information is also being actively disseminated by Russia’s leading propagandists (such as Alexander Dugin, who deliberately used unrelated images of dead children to corroborate his hysterical calls for all able-bodied Russians to travel across the border and wage war against Ukraine’s military, government and people).

To those who have been following the exposure of the Russian media’s lies about the situation in Ukraine, it should come as no surprise that the stream of lies is neither stopping, nor becoming any more sophisticated.

On July 7, 2014, Russian mainstream media exploded with a stream of articles about Alexander Skryabin, an alleged “hero of Novorussia,” who reportedly threw himself under a Ukrainian tank, armed with a “bundle of grenades.” No one seemed to be perturbed by the fact that Alexander Skryabin died of lung cancer on September 27, 2011.

LifeNews coverage of the postmortem terrorism

This tale of “heroic death” for the benefit of the nonexistent “Novorussia” was published and reproduced by numerous media outlets, accompanied by photos of the hero (as shown here in the video released by the Russian media outlet LifeNews). After the story was exposed as a fake, LifeNews replaced the photo of Skryabin with the photo of a burning tank from Cote D’Ivoire.

The story about heroic miner-cum-separatist Alexander Skryabin appeared on Russia Today (RT). Even after it was publicly revealed that “Novorussia’s hero miner” died years ago, RT did not remove the article.

[UPDATE] On July 10, 2014, Russia Today issued a retraction and removed the article.

Media coverage of the postmortem terrorism

The same tall tale was also published by Komsomolskaya Pravda,Vesti, the portal for the Communist Party of the Russian Federation, NTV, Gazeta and many others. While most of them removed Skryabin’s photo, they did not delete the story of postmortem terrorism.

Since dead men tell no tales (but, apparently, commit terrorist acts), Komsomolskaya Pravda went all out and published two different stories starring Alexander Skryabin. In the first article, a deceased cancer patient blew himself up and a Ukrainian tank with a bundle of grenades, to save his comrades, fellow separatists. In the second article (published three hours after the first), Skryabin was riding in a truck, when it was ambushed by the Ukrainian National Guard. As members of the National Guard walked towards him, Skryabin found the time to make a phone call to the separatists, exclaiming that he won’t surrender. He then proceeded to blow up himself and members of the National Guard with a single grenade.

Media coverage of the postmortem terrorism

In short, Russian media’s approach to running a false story is exemplified by this spectacle. Even after being repeatedly caught in lies and deliberate falsifications, Russian media outlets are neither ashamed, nor attempt to set the facts straight. Keeping in mind that Russian media is strictly controlled by its oppressive government (most alternative media sources have been put out of business, blocked or otherwise suppressed), one must realize that the same approach is utilized by Russian politicians at large in their dealings with the world. One important lesson that the civilized world learned from the events still unfolding in Ukraine is that Russia, under its current leadership, simply cannot be taken at its word.