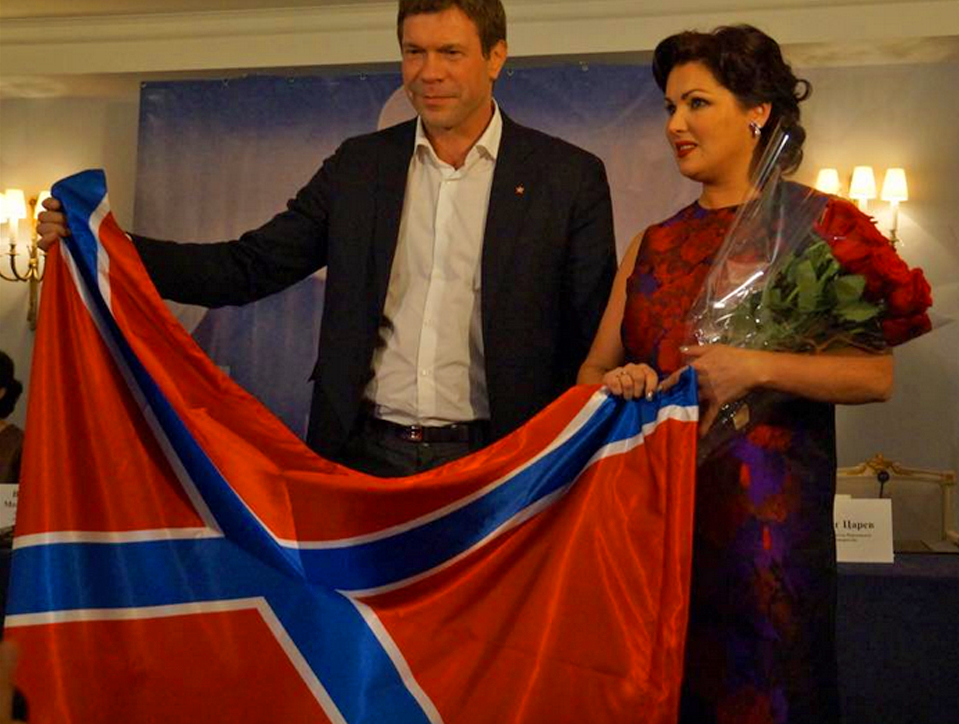 On December 8, 2014, terrorist leader, pig farmer and a disgraced former MP Oleg Tsarov gleefully reported that Netrebko “accepted the flag of Novorossiya.” The nonexistent republic the terrorists strive to carve out of the Ukrainian land is the proverbial meat grinder, where “rebels” armed by Russia fight without a cause. Russian Foreign Minister Sergei Lavrov described the beleaguered region as a festering sore, but disingenuously blamed the West for the continued bloodshed.

Anna Netrebko supports the terrorist groups in Ukraine not only by holding up their flag, but also by donating 1 million roubles to the Donetsk Opera Theatre. After hobnobbing with Oleg Tsarov, Netrebko handed him the check. On his Facebook page, Tsarov wrote: “The funds Anna allocated for the restoration of the theater will be available for “Donbass Opera” in the near future. In appreciation of my fellow citizens, I gave Anna the flag of Novorossia.” Tsarov is wanted by the Ukrainian government on charges of separatism. He is also on the list of individuals sanctioned by the EU for their role in events in Eastern Ukraine.

Theatre performances may be the last thing on the mind of local residents, as they line up to receive free porridge out of food trucks in terrorist-ridden Donbass. Much of the civilian population, including many of the opera’s singers and orchestra players, fled the area. Russia-sponsored fighting, which involves covertly-deployed members of the Russian military, has claimed the lives of more than 4,000 people to date. Netrebko’s brazen endorsement of terrorist elements in Ukraine is sure to strike a sour note heard around the world.

[UPDATE] Austrian Airlines responded with a comment, stating: “Anna Netrebko used to be an advertising partner of Austrian Airlines, the advertising contract with Ms Netrebko expired at the end of November. We distance ourselves from extreme political positions and the use of armed violence.”

Anna Netrebko’s PR representative, Sean Gross, commented: “There was unfortunately a glitch in Anna’s website that caused the news item about Anna becoming an ambassador for Austrian Airlines to be dated today … We are looking into what caused the website error and will have it fixed shortly. In addition, I think it is unfair and possibly even libelous to call Netrebko a “Terrorist sympathizer.””

Anna Netrebko commented about her donation, stating in part: “The current conflict worries me very much. My heritage is both Russian and Ukrainian, and it breaks my heart to see the fighting and destruction. I have friends in Donetsk, young musicians who told me that the theater there has been partially destroyed. I wanted to help and support my fellow artists with a donation, because I believe in the power of art in times of conflict and crisis. I want to make clear, however, that this donation is not a political act. This is not about politics, it is about art. I simply want the fighting to end as soon as possible, and I want to support art and artists in a time of terrible conflict. All of us artists must stand up for cultural values and peace in the world.”

In reference to the photo with Oleg Tsarov, Netrebko adds, “He was presented to me as the only person who could ensure safe delivery of the funds to the theater in Donetsk. The presence of the flag was unplanned and caught me off guard; I actually did not recognize it at first and realized only later what it was.”

An Austrian Foreign Ministry spokesman said: “It‘s problematic to get yourself photographed with an eastern Ukrainian separatist and his flag. It‘s clear that such photos will be immediately be misused for propaganda purposes.”

President of Ukraine Petro Poroshenko previously stated: “Those armed in Eastern Ukraine should not be referred to as “separatists.” There are no separatists there. They are terrorists.” President Poroshenko added that every country, including Russia, must determine whether it is “together with the terrorists or together with the civilized world.” He added: “Every country and every person, and every leader should find out their own place.”