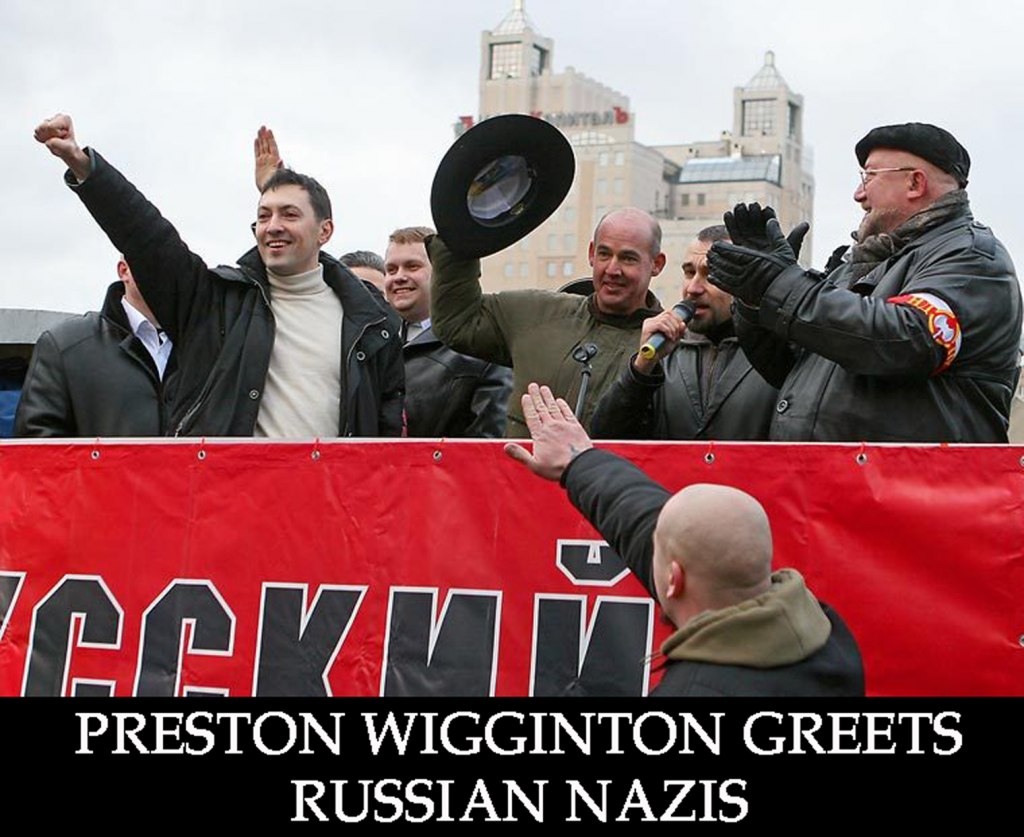 Neo-Nazi Preston Wigginton is a familiar face at Texas A&M University in College Station, Texas. He has been allowed to spread racist, anti-Semitic speech at this prestigious learning institution for nearly a decade. In January 2012, Wigginton held a demonstration at the University’s campus against Dr. Martin Luther King, Jr. and the civil rights movement. Prior to that, he sponsored an appearance of a notorious Holocaust denier, Nick Griffin. Texas A&M is the sixth-largest university in the country, with membership in Association of American Universities. It has an endowment valued at more than $5 billion.

Preston Wigginton, on the other hand, is anything but impressive. He is a member of Vladimir Putin Fan Club, close friend of America’s most notorious racist David Duke and claims to be in contact “with political people in Russia on a daily basis.” He boasted of connections to Dmitry Rogozin, Deputy Prime Minister of Russia, whom he offered to bring as a speaker to Texas A&M University. Wigginton is a virulent racist and anti-Semite. He believes that all black people should be confined to Africa and all Jewish people should live in Israel. 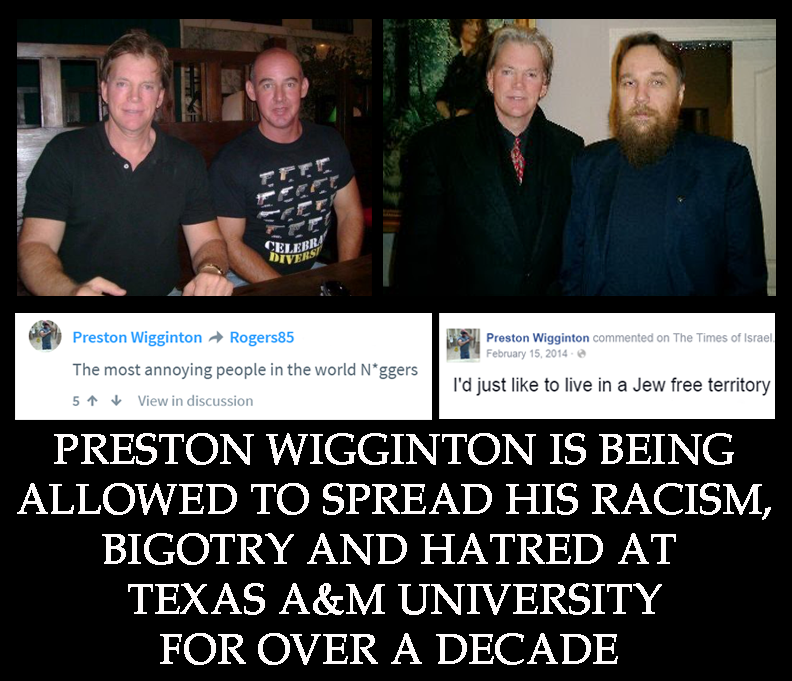 Wigginton preaches hatred, bigotry and racism with passion, but doesn’t mind interracial encounters during his sex tourism trips to Russia. He hates “liberal professors” at Texas A&M University, which regularly welcomes his events and gatherings. He hates American women and America in general, which he refers to as “Murka” and “Murika.” Here is a small collection of quotes that sheds the light on Wigginton’s twisted set of beliefs:

Next year, Wigginton is planning to invite his friend David Duke to speak at Texas A&M University. This year, he produced notorious Russian fascist, Alexander Dugin, who was unable to attend the gathering personally. Dugin is on the U.S. sanctions list, for encouraging and funding terrorism in Ukraine. He called for genocide of Ukrainians, whose ethos he says “appeared out of manholes as a bastard race.” Dugin, who is infamously known as ‘Putin’s Brain’ and his informal adviser, seeks the establishment of a New World Order, led by Russia – “the Russian world.” He wants the West and specifically the U.S. to be destroyed.

For years, Dugin has been dreaming of the coming conflict between the West and “Eurasia”: “Between them is only enmity, hatred, brutal struggle according to rules and without rules, for extermination, to the last drop of blood. Between them are heaps of corpses, millions of lives, endless centuries of suffering and heroic deeds.” In 2014, James D. Heiser’s book exposed Dugin’s aspirations and twisted philosophy in the work entitled “The American Empire Should Be Destroyed.”

In response to media inquiry by the Examiner, Texas A&M University’s spokesperson Shane Hinckley wrote: “Neither this event nor its message are promoted or endorsed by Texas A&M University. Mr. Wigginton is a private citizen who reserved space generally available to the public to host events of its own choosing.” Mr. Hinckley added: “The university supports the First Amendment rights of speakers even when their judgment and actions are morally reprehensible.”

Texas A&M University may be the only learning institution in America that welcomes Neo-Nazis, skinheads, KKK, racists, anti-Semites, people advocating terrorism and violent overthrow of the American governmentto spread their filth to the minds of the University’s students. Petition addressed to the University’s Interim President Mark Hussey has been created by concerned citizens. It states in part: “Alexander Dugin, a notorious Russian neo-fascist ideologue close to the Kremlin, was recently banned by the US Government from entering the United States. Last year, he was fired from Moscow State University after the petition titled “We demand dismissing a MGU sociology faculty professor A.G. Dugin!” was signed by over 10,000 people. The petition was started after Dugin in an interview had called for physical extermination of Ukrainians: “To kill, kill, kill. There should be no more conversations. As a professor, I think so”. Last year the U.S. government put Mr. Dugin on a list of Russian officials and ideologues barred from entering the U.S.”

Petition goes on to say: “As a nation, we Americans stand for open discourse and protecting the basic freedoms of the Constitution. However, freedoms entail responsibilities. It is not in anyone’s interest nor is it allowed through various Supreme Court rulings to yell “Fire” in a crowded auditorium. And yet, Texas A&M University is allowing a firebrand, an avowed enemy of the United States, and a man who is recruiting young Russian people to fight in the Russian-sponsored war in Ukraine – Alexander Dugin – to infiltrate the minds of innocent students with his lies, hatred and desire to bring down everything that we stand for as a nation.”

Texas A&M University is making a conscious decision to violate the sanctions of the U.S. government, by allowing individual prohibited from entering the United States to spread his virulent anti-American speech via Skype. In doing so, they violate the provision of the Presidential order that prohibits materially assisting, sponsoring, or providing financial, material, technological support, goods or services to or in support of sanctioned individuals, including Alexander Dugin.

The leadership of Texas A&M University should be criminally investigated, with potential loss of endowments and grants to this learning institution. Dugin’s open incitement of terrorism and genocide has already caused thousands of deaths in Ukraine. Allowing racist, anti-Semitic and other hate speech on campus was reprehensible, but welcoming presentation of a sanctioned individual with direct links to terrorism, who openly seeks the overthrow of American government, crosses not only moral, but legal lines.