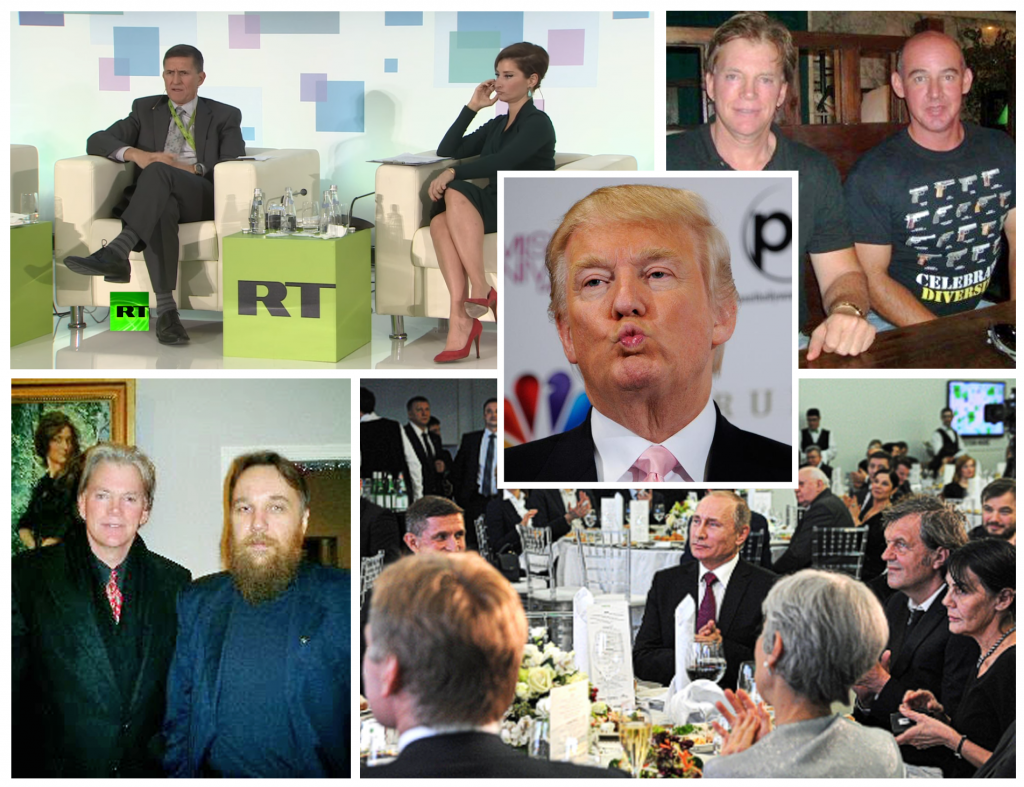 The Russian media is aflutter with pro-Trump reporting and for a good reason. The leading presidential candidate appears to be susceptible to skillful pro-Kremlin manipulation and grooming. In fact, Donald Trump is receiving foreign policy advice from a former chief of the Defense Intelligence Agency (DIA), retired Lieutenant General Michael Flynn. Lt. Gen. Flynn is a registered Democrat, who “has not ruled out running for elected office at some point in the future.”

In 2014, General Flynn referred to Russia as an adversary to the U.S. and said that the annexation of Crimea could and should have been dealt with, based on the intelligence that was available beforehand. On December 10, 2015, General Flynn happily attended a gala celebration for the Kremlin’s leading state-sponsored propaganda network, RT (formerly known as Russia Today).

Tuxedo-clad Flynn was seated next to the head of RT, Margarita Simonyan, and the President of Russia,Vladimir Putin. The very next day in an RT interview Flynn said that Russia and the U.S. are in “a marriage, whether we like it or not” and asserted that “we don’t need that marriage to break up.” When asked by the host why the U.S. was reluctant to trust Russia, Lt. Gen. Flynn didn’t even think to bring up its aggression against Ukraine. His attitude had notably shifted towards working with Russia with “common goals” in mind.

The same rhetoric of “working with Russia to defeat ISIS” and looking the other way while Russia terrorizes its neighbors now permeates Trump’s foreign policy platform. This suits Putin just fine. The Kremlin’s networks are full of praise for America’s one and only presidential candidate who would hand Ukraine to Russia on a silver platter. This moral flexibility brought joy and delight to “Putin’s Rasputin,” notorious neo-fascist ideologue, Alexander Dugin.

In his typically offensive fashion, Dugin opines: “Donald Trump is the furthest to the right of all the Republican candidates, but not in the same sense as a crazed invalid McCain or former Trotskyite neocons, obsessed with the idea of ​​world domination… Trump – the voice of the real right-wing America, which couldn’t care less about foreign policy and American hegemony. It cares about the second amendment to the Constitution to bear arms… predictable routine of farm life and the freedom to use the freedom as you’d like, and not as prescribed by the Liberals. This is quite a nice part of religious America, sometimes rather stupid, narrow-minded, unpretentious – talentless people, but at least they’re not perverts. In the US elites, those types are rare to nonexistent. Trump is the exception. A normal American in an elitist zoo of abnormal ones.”

Dugin is notably linked to David Duke, who had traveled to Russia and had written a book, “The Secret Behind Communism,” wherein he attempted to blame the Jews for “the greatest Holocaust in the history of mankind.” In April 2015, Duke’s self-described “close friend,” Neo-Nazi Preston Wigginton, arranged a conference for Alexander Dugin at Texas A&M University.

David Duke’s recent “non-endorsement” of Donald Trump also bears curious ties to the Kremlin’s most prominent propagandists in the West. Apparently, Duke supports the ideas of Professor Stephen F. Cohen, a notorious Russian apologist. According to Duke, Trump is the only presidential candidate who wouldn’t “start a devastating war with Russia.” Of course, what that really means is that Trump is the only candidate who would most likely allow Russia to do as it pleases, placing unwarranted blind trust in Putin (as long as the compliments keep on coming). The consequence of surrendering American foreign policy and the world at large to the Kremlin would undoubtedly prove to be catastrophic. For that very reason, Putin’s propaganda apparatus will continue cheering for Trump.