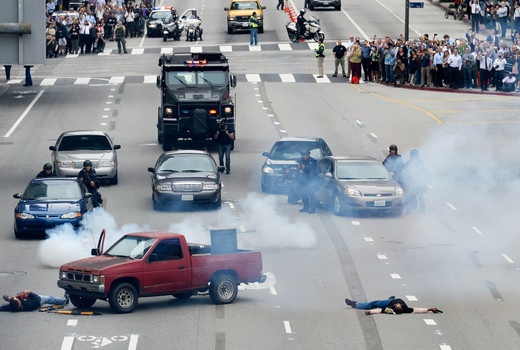 For years, Los Angeles authorities concentrated on protecting major landmarks, airports and gathering places from potential terrorist threats. Terrorist attacks in Paris are now forcing L.A. officials to reassess potential terrorist threats. The massacre in France targeted unsuspecting diners at restaurants and audiences at a concert hall. The prospect of such devastating attacks in the United States makes local authorities re-evaluate their strategies. Now they have to expand the focus to less prominent gathering places that could be targeted as potentially vulnerable locations.

“Iconic and symbolic targets are not as high on terrorists’ priority list as killing high numbers of people,” said Michael Downing, Los Angeles Police Department’s anti-terrorism deputy chief. Protecting malls, railway stations, movie theaters, clubs, concerts and event venues pose a real challenge in terms of identifying and safeguarding potential terrorist targets. “About 80% of all terrorist attacks are carried out at places without a security perimeter or guards. The presence of a single guard at the soccer stadium stopped a horrific bombing in Paris. Terrorists look for places they don’t have to penetrate or face a challenge,” said terrorism expert Brian Michael Jenkins.

LAPD and L.A. County sheriff’s officials are planning to travel abroad, in an effort to glean first-hand information and advice from Paris law enforcement on responding to a multi-targeted event. A synchronized attack on multiple soft targets could pose a real danger to the city of Los Angeles.

Earlier in November, LAPD held anti-terrorism drill in south Los Angeles. Hundreds of police officers from around the city rushed to the LA Coliseum. The purpose of the drill was to gauge their response time and to ensure that their equipment was working properly. LAPD Deputy Chief Michael Downing explained that the nature of the threat evolved from the expectation of a lone wolf attack to multiple simultaneous terrorist acts, which is “a game changer here where this is more complex than Mumbai. This is multiple people, multiple targets, creation of chaos, targeting of soft targets.”

Police Commission President Matt Johnson said that future terrorist attacks are imminent. “It’s not an if, it’s a when,” he concluded. With the holiday season upon us, local authorities remain on high alert and are increasing their visibility in “soft target” locations in an attempt to deter potential attackers.