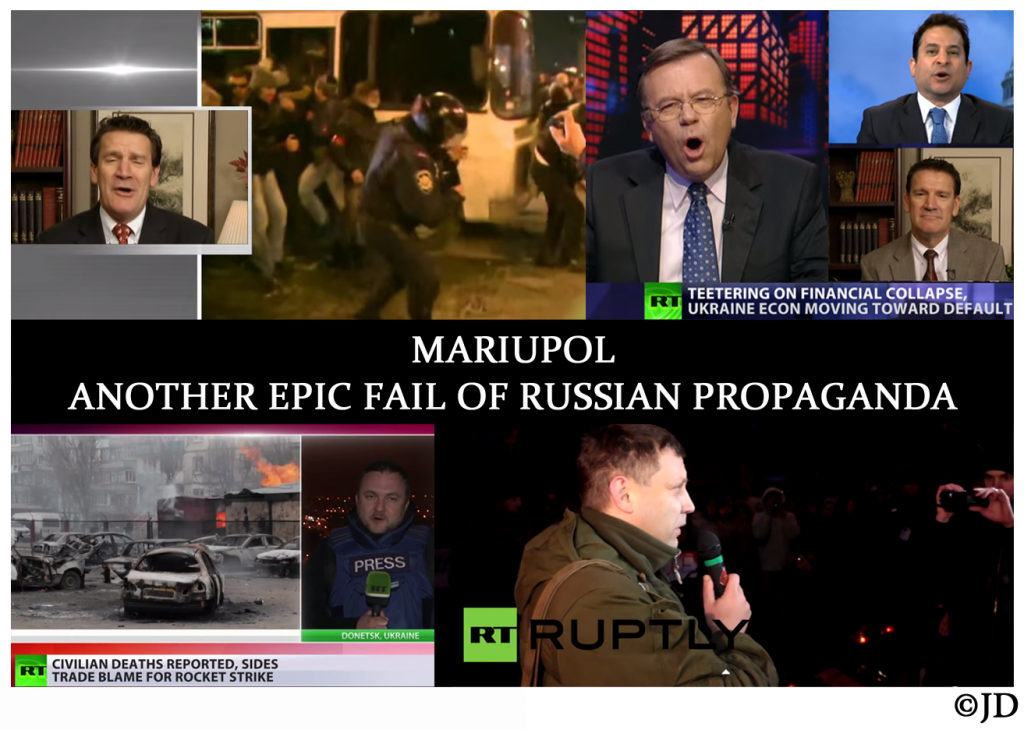 Horrific rocket attacks by Russian insurgents in Ukraine have left 30 people dead and over 100 injured in the city of Mariupol. Kremlin continues to deny its direct involvement, in spite of a growing body of information about numerous Russian soldiers killed in Ukraine, as well as sophisticated Russian weaponry used by the so-called “rebels” in their attacks. Russian paratroopers, captured in Ukraine, revealed the use of misleading uniforms that enable members of the Russian military to covertly operate within Ukraine. These techniques, also known as “masquerades” or false flag operations, were common under Soviet military doctrine. Soviet and Russian commandos were sent into Afghanistan and Chechnya, posing as locals.

Another front of Russian aggression is the country’s notorious propaganda machinery, which aids the Kremlin in its efforts to obfuscate the facts and spread disinformation. One common technique of the Russian mainstream media is boasting about the offensive mounted by Russia-funded “rebels,” but immediately shifting the blame to the Ukrainian military whenever terrorist activities cause mass casualties of civilians. This strategy was previously used in Russia’s coverage of the downing of Malaysia Airlines jet MH17 by Russian separatists in Ukraine. After touting the admissions from “the rebels” about downing yet another Ukrainian jet, Russian mainstream media abruptly changed their story once it was clear that Russian terrorists shot down the civilian airliner.

The same strategy is being used by Russia’s propaganda machine to shift the blame for the Mariupol massacre to the Ukrainian military. First, RT (formerly known as Russia Today) proudly broadcast an announcement by the terrorist leader of the self-proclaimed DNR (Donetsk National Republic), Alexander Zacharchenko. To the cheers of the crowd in a televised appearance, Zacharchenko exclaimed that the “rebels” have commenced an offensive, storming the city of Mariupol. These and other plans were published by Komsomolskaya Pravda just one day earlier. Separatist leader Pavel Gubarev boasted about the upcoming attacks of Mariupol and other cities on Jan. 23, 2015. Once it was revealed that the indiscriminate shelling caused the deaths of 29 civilians and one Ukrainian soldier, the Russian networks started to sing a different tune. They now claim that Ukrainian forces were behind the attacks and the “rebels” have no plans to storm Mariupol.

The Organization for Security and Co-operation in Europe (OSCE) confirmed that the rockets came from the areas controlled by separatists. Ukraine’s security service (SBU) has published the recording of intercepted conversations between the “rebels” speaking about the Mariupol attack. While Russian propaganda is constantly debunked and invalidated, it still achieves its primary purpose. By sewing black seeds of deception, Kremlin’s mouthpieces create confusion and fabricate false moral equivalency between terrorists and their victims.