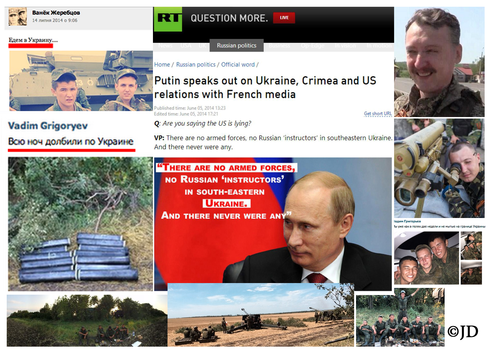 Putin’s house of cards continues to fall apart, one Joker at a time. The West assumes that the game of strip poker will eventually shame Russia into curtailing its activities, failing to realize that Emperor Putin is a nudist. Like any good Chekist, he is largely devoid of shame or conscience. Russia cannot be understood according to the Western system of values, for it does not seek to be liked, trusted or respected. Putin’s Russia wants only to be feared.

The West is likewise incorrect in assuming that the majority of Russians are zombified into supporting aggression against Ukraine. Many of them fully realize that Russian mainstream media is broadcasting blatant lies. They’re willing to reiterate and disseminate deliberately false statements in a misguided belief that in doing so, they’re helping Mother Russia to counter Western propaganda.

The Red Cross has made a confidential legal assessment that Ukraine is officially in a war. This determination opens the door to possible war crimes prosecutions, including the downing of Malaysia Airlines MH-17. The West must realize that this is an unconventional war, against the opponent who does not play by the rules of the civilized world.

Russia’s President shamelessly asserted that there are no members of the Russian military operating in East Ukraine in any capacity. He made similar claims about Russia’s Anschluss of Crimea and later simply admitted that the opposite was true. In the same way, it’s indisputable that Russian citizens, current and former members of the RF military and the FSB, are leading the artificial “rebellion” in Eastern Ukraine.

So-called “volunteers” are being openly recruited and funded in Russia. Leading propagandists and Communist party leaders are spearheading these efforts. Putin made no attempt to curtail these activities, regardless of the Western governments becoming “concerned” or “deeply concerned.”

Additionally, Russian soldiers are documenting their deploymenton the border with Ukraine, which includes shelling Ukrainian targets across the border with Russia “all night long.”

Russian soldiers document their deployment at the border with Ukraine

U.S. officials said “a preponderance of the evidence” indicates that aircraft in Ukraine are being downed not only by Russia-sponsored terrorists, but also by surface-to air missiles fired from the Russian side of the border.

Some Russian soldiers report the route they have to take (including the maps), in transporting heavy artillery towards the border and into Ukraine.

Russian soldiers stationed on the border between Russia and Ukraine

Conveniently, these postings are geo-tagged, corresponding with the areas where Ukrainian military reported heavy fire, rocket strikes they believed originated from Russia.

These incriminating revelations are reminiscent of the social media posturing by Russian terrorists in Ukraine, which preceded Russia’s ridiculous attempts to distance itself from the horrific downing of the Malaysian airliner. Terrorists who proudly boasted they had the Buk system, categorically denied it after shooting down MH17, later admitted they do have Buk, but claimed that it’s “broken,” while their RF supporters took credit for sending Russian specialists to fix the Buk.

Some terrorists now admit they in fact downed the Malaysia flight, combined with mixed messages by other members of the rag-tag team of misfits, recklessly armed by Putin’s Russia in Ukraine. Anyone taking this stream of contradictory statements seriously might suffer the spinning-head effect akin to “The Exorcist.” The same might be said about irresponsible, government-funded Russian media as a whole, which operates in accordance with the apparatus it’s designed to support.

The West must realize that Putin’s uncivilized ambitions cannot be curtailed by the mere expressions of grave concern. Current and intended victims of Russia’s aggression must be given real aid without delay, for tomorrow may be too late.