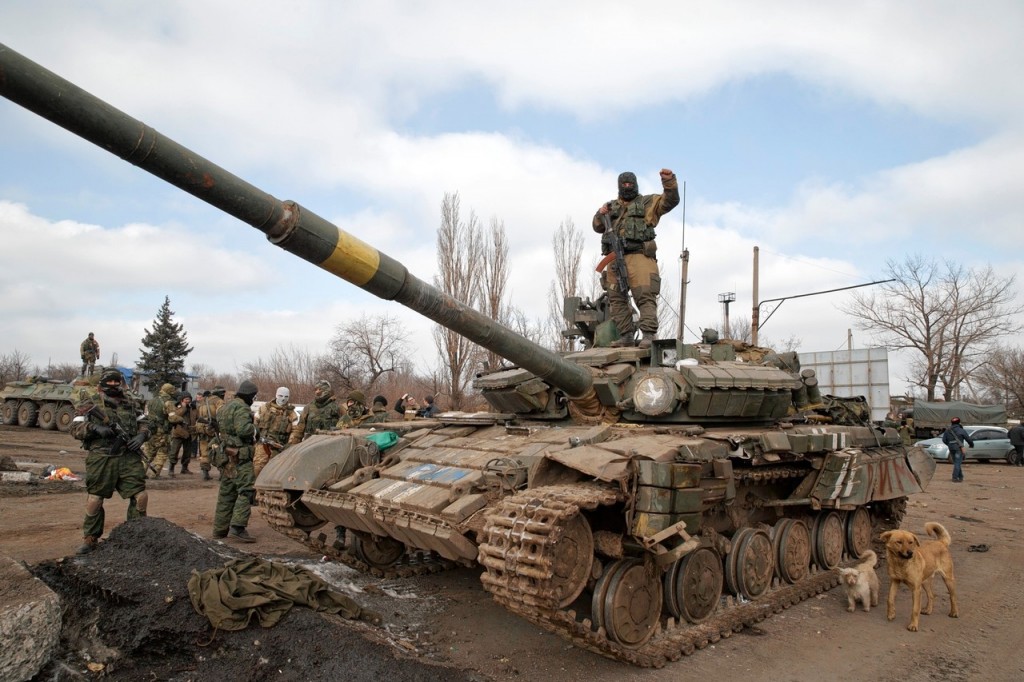 President of Russia Vladimir Putin arrogantly scoffed at the defeat of the Ukrainian military in Debaltseve, gloating at their “shame” of losing the battle “to yesterday’s coal miners and tractor drivers.” In reality,Ukraine is fighting against Russian military that is hiding behind the fraying veil of local “separatists.” Much like Russia’s “little green men” in Crimea, Ukraine is crawling with regular Russian troops and armaments. Russia is using its most sophisticated weaponry in eastern Ukraine, including the truck-mounted SA-22 surface-to-air missile system (Pantsir-S1). Ukraine does not possess these types of weapon systems, which immediately dispels ludicrous claims of separatists about “capturing” weaponry from the Ukrainian armed forces.

Russian media dropped the pretense of tractor-driving local separatists with the recent report published by Ilya Barabanov in Russia’s newspaper “Kommersant.” It confirms longstanding reports by Ukrainian soldiers that they were fighting Russian regular troops, and not local militants, in Debaltseve. Barabanov writes: “20-year-old Misha was born in Yekaterinburg, 21-year-old Alex – in Mozdok, Artem is 22 years old, he is from the Slavyansk-on-Kuban, Dima is 23, he is from Vladikavkaz. Other guys are from Chita, Norilsk, Ulan-Ude. At the first glance, they have nothing in common. And yet, they do: the city of N, military unit *****, separate motorized infantry brigade ‘N’.”

Barabanov reports that Russian soldiers “without insignia” are now fighting in Debaltseve and other Ukrainian towns in Donbass. They are here on a “perpetual mission” to protect their “homeland” by fighting against another sovereign country. Russian military engages in combat on behalf of the self-proclaimed Donetsk and Lugansk “Peoples Republics.” Soldiers are led to believe they are protecting “freedom-loving Donbass” from the “Western aggression” and “Ukrainian beasts.” To hide the presence of Russian troops from journalists, their access into town was cut off. After the final assault, members of the military concealed their presence, local coal miners were placed as guards for the roadblocks and journalists were again allowed to enter the area.

Barabanov compares these events to the civil war in Spain, where Russian generals were commanding military operations under code names or pseudonyms. He knows the full names of all the participants interviewed for the report, but the editors of Kommersant weren’t willing to publish them at this point in time. These revelations will not surprise anyone who has been paying attention to Russia’s activities in Ukraine. Russian soldiers have previously revealed the details of their involvement to Newsweek and families of those killed in action have complained about being prohibited from publicly discussing the deaths of their loved ones. It is, however, surprising to see that even Russian publications no longer attempt to keep this information a secret. This might be an indication that Russia’s aggression against Ukraine will become even more brazen in the coming days.