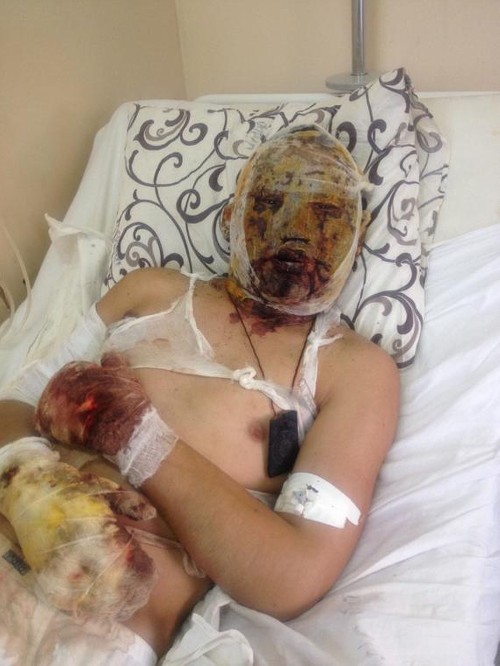 Russian military regulars fighting in Ukraine is an open secret –a “secret de Polichinelle.” Putin’s ghost army is ravaging the Ukrainian countryside, while Russian officials continue to deny their presence in a neighboring country, brazenly lying to the world. Russia is quietly transporting its wounded soldiers,checking them into hospitals after-hours and omitting their names from the general registries. The dead of Russia’s undeclared war against Ukraine are being buried in secret. Injured survivors are ordered not to admit where the said injuries occurred, at the risk of losing military benefits. Their families are also discouraged from speaking out. Russian government labeled the non-profit group Soldiers’ Mothers a “foreign agent,” after its chairman, Ella Polyakova (also a member of the Kremlin’s human rights council) openly stated that Russian soldiers were fighting in Ukraine. Russia’s former Deputy Prime Minister Boris Nemtsov was gunned down near Kremlin walls, just before he was to present incontrovertible evidence about regular Russian troops fighting in Ukraine. Nemtsov was under constant surveillance and the location where he was assassinated is the most-policed area of Moscow. The brave truth-teller became yet another casualty of Putin’s covert war in Ukraine.

A common misperception in the West is a somewhat naïve expectation that Russian people would rebel, if they only knew that Putin is covertly sending soldiers to fight and die in another sovereign country. The fact is, many of them already know. Blinded by shameless Russian propaganda, they don’t mind the fact that their government is obfuscating the facts and lying to the world. To the contrary, they’re proud of their fibbing President. In their imagination, inflamed by Russian mainstream media, the end justifies the means. They don’t mind it when lies are spouted from the Kremlin, because many Russians see themselves at war with the West. “The information war” is therefore part of this one-sided grandstanding, where anything goes. Believing Putin’s lie about “NATO legions” in Ukraine, many Russians are content to believe that their military battalions are waging battle against these imaginary Western opponents. What they fail to realize is that while Putin is lying to the world, he is also lying to the Russians.

Russian mainstream media and the country’s leading propagandists (designated as so-called “guardians” of the establishment) callously disseminate images of dead and injured children in the Middle East, passing them off as casualties of the Ukrainian military. They show off images of Russia’s brutalities in Chechnya, representing them as Ukraine’s alleged slaughter of its own civilians. They ludicrously exclaimthat Ukrainian armed forces are “crucifying children and forcing their mothers to watch.” Quite simply,Russia lies to everyone. These falsehoods affect the country’s citizens in the most profound way: by convincing them to give up their very lives for the sake of defeating their alleged arch-nemesis. Instead of the phantom “NATO legions,” they savagely attack Ukrainian military and civilians on Ukrainian soil. As Slavoj Žižek once said, “[T]he horror of Communism, Stalinism, is not that bad people do bad things — they always do. It’s that good people do horrible things, thinking they are doing something great.”

A stunning interview published today by Novaya Gazeta (one of very few independent media outlets remaining in totalitarian Russia), showcases the warped mentality of Putin’s soldiers in Ukraine. Dorzhi Batomunkuev is a Russian soldier, who participated in a tank battle near Debaltseve. He detailed the process of deployment of Russian troops to Ukraine and outlined his own participation. (Full English translation of the article can be viewed here). While the information he revealed is quite staggering, Batomunkuev’s self-described mindset is equally as revealing. Although the troops were initially told they are going to participate in military exercises, all soldiers knew where they were going. “Even if we do military exercises first, we’ll be sent to bomb khokhols [derogatory slur used by Russians to describe Ukrainians].”

Batomunkuev describes the process of “maskirovka” (military deception) that commenced in Russia: painting over the license plates, disguising tanks, removing military patches and epaulets, leaving passports and military ID’s with their military divisions. “We all knew where we were going. I was fully adjusted, mentally and physically, to the fact that we would have to go to Ukraine.”

While in Donetsk, the Russian military listened to the radio program, discussing whether Russian troops are present in Ukraine. Every guest on the show denied it – but it didn’t surprise the troops. “Our government understands that we need to help, but if they officially bring in the troops, Europe and NATO will go nuts,” Batomunkuev explained. He openly admits that Russian troops fight on behalf of the so-called “separatist rebels” in Ukraine. Batomunkuev also has no qualms about killing civilians in Ukraine. When he saw civilian vehicles and believed that the people within were Ukrainian, he murdered them in cold blood. Batomunkuev concedes that Russian troops destroyed multiple Ukrainian villages, but he has trouble remembering their names. “They all look the same,” he says.

In the city of Makiivka, Russian troops were warned that around 70% of the population was pro-Ukrainian. To Batomunkuev and other Russian soldiers, that was simply “unimportant.” He is there to bring “independence and Putin” to the militants of Donetsk. The Russian troops have no regrets, believing that they’re in Ukraine “fighting for a just cause.” Even his Buddhist beliefs are somehow not in conflict with Batomunkuev’s covert slaughter in a neighboring country. He is excited to have met recently-sanctioned Iosif Kobzon, talks of traveling the world and plans to go fishing, once he recovers from severe burns. Batomunkuev has no issues with Putin and his lies about Russia’s covert invasion of Ukraine. To the contrary, he beams with pride. Putin is a “very interesting person” and is “very cunning,” Batomunkuev gushes. “To the whole world he says: “Our troops aren’t there,” but to us he says, “Go, go, go!” After discussing his understanding of geopolitics and praising Putin for forcing the world to contend with Russia, Batomunkuev adds: “I am no fool… In this war we’re fighting for our own rights.”