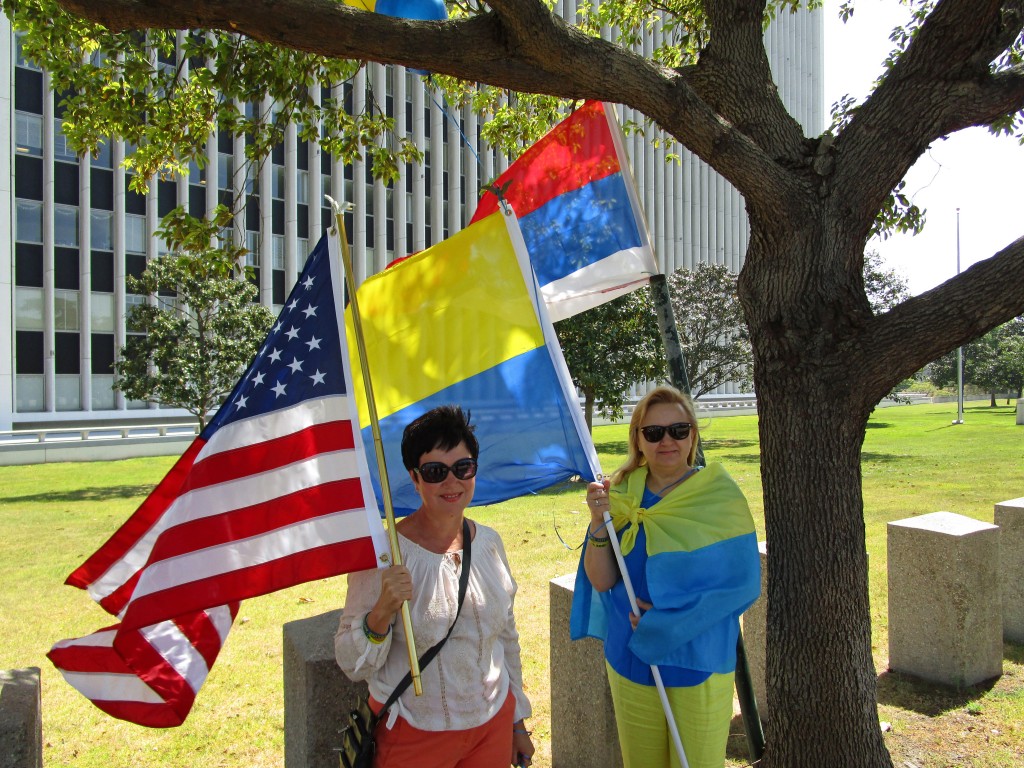 A powerful march of peace and unity took place today in Los Angeles. Russians, Ukrainians and Americans came together for the March of Peace and Freedom. Organizers of this event stated: “We know that the power in the Kremlin does not represent the whole of Russia, nor all the Russian communities in foreign countries. Russian propaganda created a huge gap between Ukrainian and Russian people, bringing hostility and hatred, which will be passed on to the next generation if we do not act quickly.” They aim to stop the war between Russia and Ukraine, to defend the independence of Ukraine, and to restore intelligence and democracy in Russia. The march honored the memory of the late Boris Nemtsov and demanded the release of Nadiya Savchenko, Oleg Sentsov and other Ukrainian POW’s illegally held in Russian prisons.

One of the organizers of the march, Alina Chorna, spoke of the widening gap between Russia and Ukraine – two brotherly nations, divided by Putin’s politics of terror and aggression. She also expressed deep alarm about the damage caused by the exceedingly deceitful Russian propaganda. Outright fakes and distortions spread by Putin’s spin masters divide families and nations. The march sought to remedy some of the damage by showing the world that freethinking Russians and Ukrainians bear no hatred towards each other. The event also wanted to give a voice to the people of Moscow, who weren’t able to hold their own march on the same date, as originally planned.

Another organizer of the march, Svetlana Salnikova, said: “In spite of living in the U.S. for years, I feel deep shame and bitterness about the recent events in Russia – especially for its war against Ukraine. These feelings prompted me to organize the March of Peace in September, 2014 to unite Russian and Ukrainian people, at least in Los Angeles. I wanted to show Ukraine and Russia how many conscientious and caring Russians all over the world don’t support the madness that is happening in their historical motherland. This particular march on April 19th, 2015 is dedicated to support Muscovites, who were planning to come out on this day in the center of Moscow to express their desire for democracy and civil rights in Russia, for the freedom of speech and against political assassinations. The latest such murder of one of the brightest and most sincere opposition politicians, Boris Nemtsov, still resonates with the inconsolable loss in the hearts of a great number of Russians. We march to honor his memory. Putin’s aggression in Ukraine also remains as one of the most urgent unresolved issues. We march against military invasion of Russia and in support of Ukraine. We are against the war! We are for peace in Ukraine! We are for freedom and democracy in Russia!”

One dissident who chose to remain anonymous, said: “I am a citizen of Russia, living in Europe. I left Russia, feeling unable to change the political system. My attempts to fight against the oppression resulted in retaliatory charges being filed against me. I’ll write a book about it someday soon. The Moscow march was my last hope that the world will see the true face of the Russian government, that the world will realize just how many people do not support the fascist regime of Putin and suffer from it. I was hoping that the Russian people will wake up and act together, instead of attempting to fight back one by one, as I have. To my dismay, Putin did everything not to allow a concurrent march to take place in Russia. Yet again, he used government powers for his own benefit, to prevent the people and the political opposition from expressing their contempt and distrust towards his fascist reign. I disapprove of Putin’s government and its war against Ukraine. I despise his lies and aggression against other nations, the waste of funds on wars and military adventures and not for the benefit of the people. I abhor the slavery of the Russian people, which is also being perpetrated by the complicit Putin-controlled mainstream media. For the recent ‘Direct Line with Vladimir Putin’ I submitted a question as to the reasons the march in Moscow was not allowed to take place in the center of the city and whether this denial would further exemplify the lack of democratic rights and freedoms in Russia. Of course, my question went unanswered.”

Stacy Bornzin said, on behalf of organizers of the march: “On April 19th in Moscow, instead of the scheduled “World March for Peace and Freedom”, there were only isolated pickets and laying flowers at the scene of the murder of Boris Nemtsov. We support all the participants of the action at our rally in Los Angeles. This is important especially for us, Russians who live in the United States and all over the world. It is impossible to remain indifferent to what is happening in our homeland – in Russia. Total suppression of civil liberties is a sign of an unhealthy society in which we can only survive against the odds. Therefore, we join the protest against lawlessness and impunity, against the lies and monstrous propaganda, against war, for peace and freedom. We want our voices to be heard. Our compatriots in Russia should know that a large number of people around the world support their aspirations for a free civilized society, in which, first of all, there should be the rule of law and the strict implementation of the rights and freedoms of every citizen of Russia guaranteed by the Constitution of the Russian Federation. We speak for those who are not allowed to speak in Moscow, we speak for Peace and Freedom.”

Another anonymous comment from a native Russian said that her rights were violated by the government’s refusal to allow the scheduled march to proceed through the center of Moscow. She added: “Every day I see that the situation in Russia is getting worse and worse. Every day I see the news full of propaganda, fakery and lawlessness. I am personally experiencing the worsening of the economic situation and the refusal of the government to improve the situation. Government reforms only worsen the lives of the average people. Shortcuts that are being implemented are negatively affecting education, medical care, the well-being and potential survival of pensioners, veterans and other underprivileged people. To distract Russians from noticing these grave problems, the news media is concentrating on Ukraine and instilling the perpetual fear of being attacked by another nation. Russia is being led to believe that we’re surrounded by enemies. I am ashamed of what the government is perpetrating in the name of Russia and its people. I am offended by the opinion that all Russians approve the actions of their government. It’s difficult to counteract aggressive propaganda, to which the Russian people are continually subjected. Whenever and wherever I get the chance to march in protest against lawlessness, unconstitutional activities and the never-changing dominion of Putin, I will do so. It’s unbearable to continue suffering under such oppression in our country. I love my motherland and want to see it strong, flourishing and free. I don’t belong to any party or movement, but now I feel that all like-minded people should stand together to change the course of events. I am against war. I want peace, liberty and friendship with other nations. I want people to know that I am not the only Russian who feels this way, there are many of us and with time, I hope our numbers will only grow.”

Under the blue skies of sunny Los Angeles, participants of the march mixed and mingled, greeted by motorists who honked their horns in support of the colorful rally. They spoke of the upcoming Hollywood Festival of the best Ukrainian films, charities that gather funds for Ukraine like Save Lives Together Foundation and engaged in lively discussions about the situation in Ukraine and Russia. There were no language barriers, no stereotypes and no disagreements. The march clearly demonstrated that freedom-minded Ukrainians, Russians and Americans have the same goals: peace, liberty, freedom and democracy. As the people stand united, their voices will not be silenced.