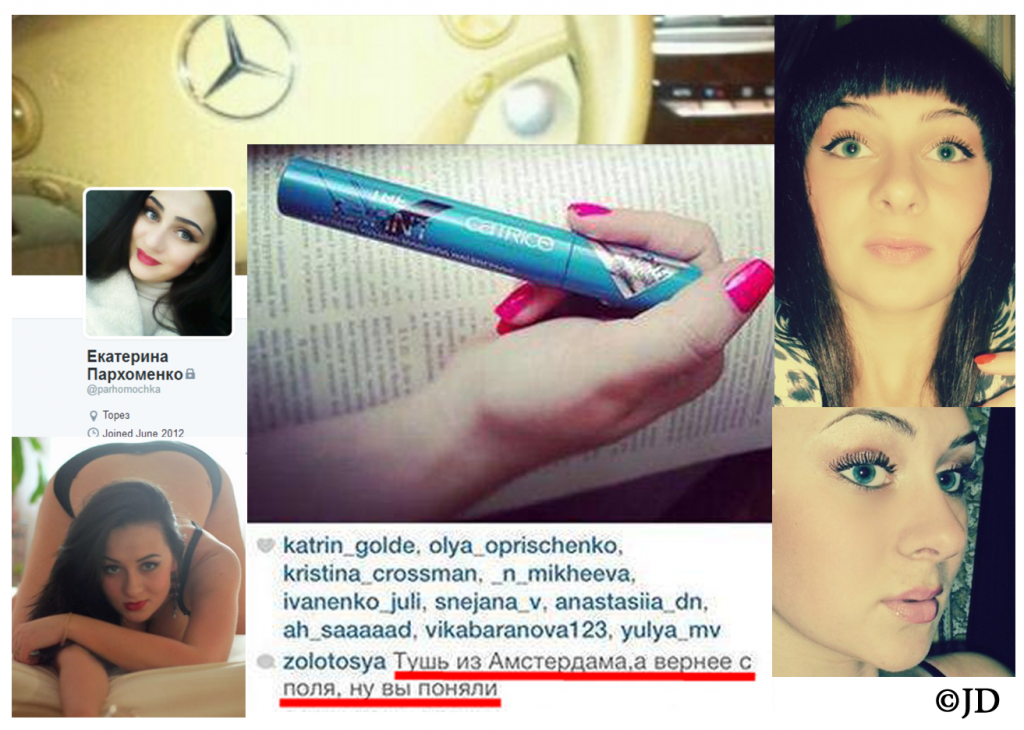 The horrific downing of MH17 sent shock waves all over the world. Devastated families and worldwide communities were stunned by such a massive, senseless loss of innocents. This grief, however, was not universal.

Separatists, whose voices can be heard laughing and happily exclaiming that the shot down plane was burning up “so beautifully,” shamelessly looted the crash site. Some were so devoid of decency, as to boast about stolen items in social media postings. Such is the case of the now infamous “mascara girl,” Ekaterina Parhomenko of Torez, Ukraine.

Bodies of the victims by the side of the road

The world is still reeling from the devastating loss of nearly 300 lives aboard the downed Malaysia Airlines flight MH17, bristling at the inhumane way with which the bodies of the deceased have been handled. Terrorists and separatists, controlling access to the site, continue to exhibit utter lack of decency that shocks the conscience.

Dr. Michael Baden, the former chief medical examiner of New York City and chief forensic pathologist for the New York State Police, told Time Magazine that many of the passengers may have remained conscious during the plane’s 3-4 minute descent.

Dr. Baden commented on the victims’ various state of undress, stating: “You can lose a shirt or a headband or maybe even a jacket, but not pants and underwear and shoes and socks. It would seem to me, given the situation, that looters came.”

Dr. Baden noted indications in the photos that some of the bodies appeared to have been moved around, based on lividity (the dark discoloration of the skin that occurs in the lowest parts of the body, as blood settles due to gravity).

In reviewing the photos, Dr. Baden also observed that none of the bodies pictured appeared to be wearing watches or jewelry.

“Terrorist death hunters” have been collecting victims’ cash, credit cards, cell phones and jewelry. Relatives of the victims, desperately trying to reach their loved ones, were shocked when strangers with Eastern European accents answered their phones. Credit cards of the victims had to be canceled, when terrorist looters started using them. Jan Tuinder, a forensics expert leading the Dutch investigation, said what was happening at the scene was ‘criminal.’ Russian government and media officials continue to obfuscate, misrepresent and invent the factssurrounding the downing of the civilian airliner.

Separatist brags about mascara taken from the dead victim

Ekaterina Parhomenko of Torez, Ukraine, who describes herself as a separatist, proudly showed off her trophy from the site of the MH17 crash. Malaysian airliner was shot down over the city of Torez. Parhomenko posted a photo of her new mascara on Instagram, commenting: “Mascara from Amsterdam – or, more precisely, from the field. You know what I mean.” Facing scrutiny from furious commenters, Parhomenko hurriedly deleted her social media accounts (VKontakte, Twitter, Instagram and others).

During the conversation, Parhomenko explained that her friend, a marauder, had given her mascara as a gift. She also wrote that personal items, from tweezers to clothes, were taken from dead victims. Parhomenko saw no issue with using the mascara, because she is “a separatist who hates everything Ukrainian.” When she was confronted by other Instagram users, who expressed their disgust with Parhomenko’s behavior, she offered to send them “underwear and fecal matter” of the deceased.

Popular Russian tabloid, Komsomolskaya Pravda, attempted to debunk this true story. Their only “source” is an anonymous Russian blogger, who falsely claimed that this particular brand of mascara is no longer available for sale and was discontinued in 2013.

It should be noted that Catrice cosmetics were never sold in Ukraine, which further corroborates the fact that the self-proclaimed separatist Ekaterina Parhomenko of Torez, Ukraine obtained it from the looted belongings of MH17 passengers.

Catrice cosmetics are sold in Germany, Austria, Switzerland, Croatia, Spain, Portugal, Hungary, Slovenia and Poland. Additionally, this mascara is currently available for purchase online, in Germany and other countries of the EU.

Komsomolskaya Pravda incorrectly concluded that photos of Ekaterina Parhomenko in this article (which were also re-published by other international publications) depict a different girl. In fact, even minimal fact-checking would confirm that the photos used in this article are in fact of Ekaterina Parhomenko and were obtained from her own social media postings, before her pages were deleted. Many of these images are still available online.

Arming the worst elements of society

Putin’s Russia empowered the worst elements of society, when it artificially created a “separatist” movement that never existed in Ukraine until now.

Ironically, it is being led by Russian citizens, current and former members of the Russian military and the FSB, whose interests are diametrically opposed to the true interests of the Ukrainian people.