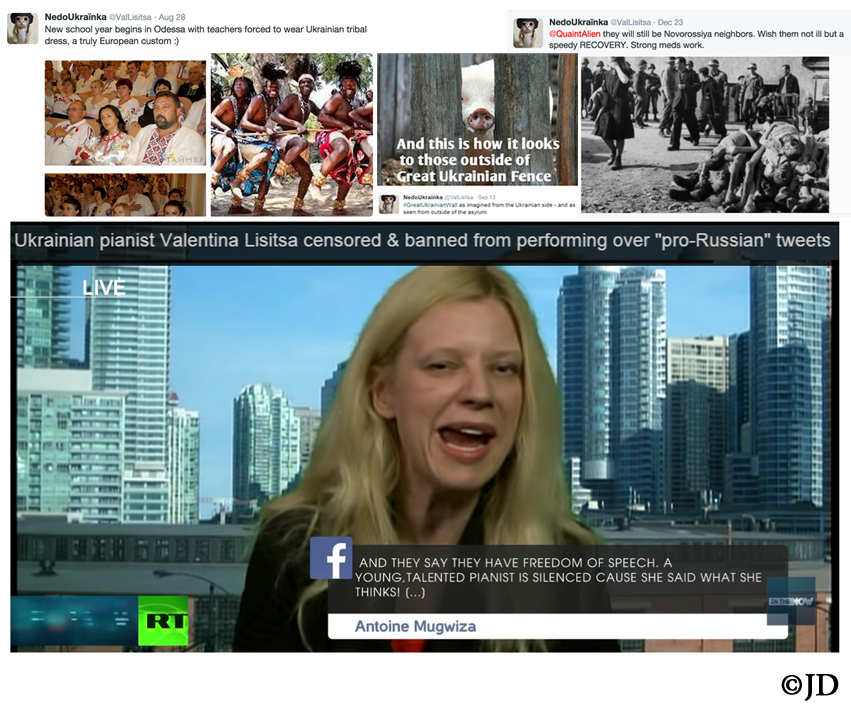 Little-known American pianist, Valentina Lisitsa, created her own popularity out of thin air by posting videos of her performances on YouTube. Recently, she was propelled into notoriety for a number of hate-filled Twitter postings. Lisitsa’s hate-mongering, offensive and racist public speech caused the Toronto Symphony Orchestra to dismiss her from a previously scheduled performance. They’re now facing criticism for alleged censorship of what RT (formerly Russia Today) described as Lisitsa’s “pro-Russian Tweets.”

Lisitsa was born and raised in Kyiv, Ukraine, but is quick to point out that she is Russian and Polish by nationality. She has been spewing her visceral hatred towards Ukraine and all things Ukrainian for years, after immigrating to the United States in the ‘90s. Lisitsa’s criticism may be sour grapes, caused by the fact that Ukraine never invited her to perform in her former homeland. She was also expressing her anger at the Ukrainian diaspora for referring to her as “Ukrainian-born” and not “Ukrainian,” in spite of the fact that she is indeed a Ukrainian-born American citizen. At the same time, Lisitsa had no issue whatsoever with the head of RT, Margarita Simonyan and other RT personnel referring to her as a “Ukrainian-born pianist.”

Many of Lisitsa’s talking points mimic RT’s skewed perspective, which suggests that the angry pianist’s mindset was most likely altered by the Russian media. Let’s examine some of Lisitsa’s Tweets, eagerly adopted by RT as “pro-Russian” views.

Valentina Lisitsa Tweeted: “This is better: Dear informed Ukrainians! I will never get tired of reminding you that you are dog sh*t. Thank you for attention.” Denigrating people of any nation with this type of hate speech is extremely offensive. When viewed in combination with Lisitsa’s other social media postings, this Tweet paints a clear picture of her extreme hatred towards Ukrainians.

Valentina Lisitsa Tweeted: “New school year begins in Odessa with teachers forced to wear Ukrainian tribal dress, a truly European custom :)” She proceeds to include photos of African villagers, side by side with photos of Ukrainian teachers in their traditional national attire. This comparison is clearly intended to be derogatory, implying that Ukrainians aren’t worthy of joining Europe. This kind of disrespect towards other nationalities, races and their cultural expression, clearly falls in with the approach for which the Nazis were infamous.

Valentina Lisitsa Tweeted a picture of the bodies of people murdered at the Buchenwald concentration camp, accompanied by the following text: “They will still be Novorossiya neighbors. Wish them not ill, but a speedy RECOVERY. Strong meds work.” The vile content of the said message is self-explanatory and also falls in line with Nazi ideology. It demonstrates the gross disrespect for Ukraine and the lives of its people, as well as support for Russia’s expansionism. “Novorossiya” is an archaic term that was resurrected by Vladimir Putin in 2014, as a flashback to Russia’s imperialistic conquests during centuries past and a prime example of Orwell’s newspeak.

Valentina Lisitsa Tweeted: “Great Ukrainian Wall as imagined from the Ukrainian side – and as seen from outside of the asylum.” Dehumanizing imagery clearly implies the comparison of Ukrainians to pigs, while also describing Ukraine as a [mental] asylum. Lisitsa’s Tweets are replete with other references to Ukrainians as “pigs,” as well as claims that all patriotic Ukrainians are mentally ill. She writes: “I really think the whole former Ukraine is a site of giant CIA experiment in mind-altering drugs” and uses disturbing imagery of Maidan revolutioners pictured as patients of psychiatric asylums. This offensive commentary exhibits many trademarks of Nazi ideology: great disrespect for another nation’s culture, intelligence, and respectability, expansionism (no need to protect Ukrainian borders, according to Lisitsa) and references to alleged mental illness – highly inflammatory allegations, reminiscent of Hitler’s propensity to exterminate people that were deemed not to be “normal.”

Valentina Lisitsa happily gloated, believing that Ukrainians would freeze in cold weather without Russian gas. She compared Ukraine to hell, posted crude cartoons mocking lack of heating andintroduced more images of pigs that she is so fond of using when discussing Ukraine. Lisitsa Tweeted: “In a new, European, Ukraine the camps will give their subhumans condemned to gas chambers an opportunity to offset their carbon footprint.” The influence of Nazi ideology is clearly present in these deeply offensive postings.

Valentina Lisitsa posted commentary suggesting that “Banderites” should be burned instead of coal for heating purposes. She appears to be very preocuppied with the idea of concentration camps, falsely claiming that they’re being built in Ukraine. Lisitsa decided to taunt Garry Kasparov, former World Chess Champion and a staunch opponent of Putin. She Tweeted: “Kasparov needs to be reminded that his adorable Western democracies enthusiastically deported his people to gas chambers…” Blatant falsehoods are seemlessly intertwined with Nazi ideology in these postings.

In response to a now-deleted Tweet, Valentina Lisitsa Tweeted: “I am sure White House is on lookout for the petition. I might have to ask Russian citizenship from Comrade Putin :)” While Lisitsa clearly despises President Obama (she dedicated a number of Tweets to her distaste for his activities, as well as NATO and the U.S. government), she considers Vladimir Putin a “Comrade.” Lisitsa apparently views her own position in the light that would suggest she is more suited to hold Russian, not American, citizenship. Perhaps, RT was not mistaken in referring to Lisitsa’s Tweets as “pro-Russian.”

The extensive collection of Lisitsa’s anti-Ukrainian Tweets contains obscene sexual scenarios, revolting graphics, comparisons of Ukrainians to people with Down Syndrome, rejoicing about the deaths of Ukrainian soldiers in Debaltseve, overt support for Russian terrorists in Ukraine, the use of derogatory slurs to demean Ukrainians and intentional falsehoods about alleged “organ harvesting,” besmerching the reputation of Nadezhda Savchenko, who was kidnapped and is now illegally imprisoned in Russia. Perhaps the worst indicator of Lisitsa’s mentality is that she never apologized for any of her revolting postings. In sharp contrast to Mel Gibson (whose prominence is by no means being equated to that of a YouTube pianist), Lisitsa’s refusal to accept responsibility for her public statements speaks volumes. Gibson used his right to free speech to apologize for his offensive remarks. Lisitsa is using her voice to perpetuate unrepentant hatred. Her odious hate speech remains unimpeded, in spite of her hollow claims of “censorship.” No regulator or government agency required Lisitsa to delete or modify any of her postings. The arts community is also free to choose whether or not to associate with the individuals like Lisitsa, once they become aware of her racist, discriminatory and highly abominable views.