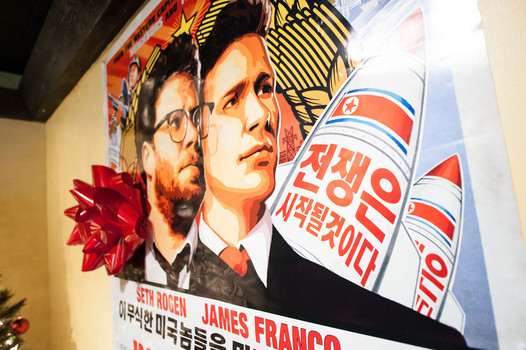 On November 26, 2014, North Korea fired another salvo against the United States, blaming the US for shutting down its Internet services and expressing outrage at the release of Sony Pictures film, “The Interview.” North Korea’s National Defense Commission, led by the country’s leader Kim Jong-un, stated: “Obama always goes reckless in words and deeds like a monkey in a tropical forest.” The commission threatened “inescapable deadly blows” to the United States as the consequence of America’s “arrogant, high-handed and gangster-like arbitrary practices despite (North Korea’s) repeated warnings.”

In Putin’s Russia, similar insults, threats and comparisons are not uncommon. Russia joined North Korea’s Stalinist comrade regime in its outrage against the controversial feature. “The very idea of the film is so aggressive and scandalous that the reaction of the North Korean side … is completely understandable,”said Russia’s foreign ministry spokesman Alexander Lukashevich.

North Korea and the US technically remain in a state of war, since the 1950-53 Korean War ended with an armistice and not a peace treaty. The West and North Korea are at odds over Pyongyang’s nuclear program and severe human rights abuses. Last month, Russia ran interference by opposing UN resolution condemning North Korea’s human rights record. Addressing those issues would bring into focus Russia’s own human rights issues. This is especially true, since the isolated dictatorship of North Korea is providing workers for the secret labor camps in Siberia. North Korean laborers live and work in deplorable conditions, with terms ranging from three to ten years.

Putin invited Kim Jong-un to attend the 70th anniversary of the Soviet Union’s victory over Nazi Germany in World War II, on May 9, 2015. Russia is closely entangled with the reclusive state and both countries plan to continue widening social and economic ties. Russia’s Gazprom wants to build a gas pipeline through North Korea, to provide natural gas exports to South Korea. Russia’s politicians and talking heads see North Korea as a partner in the grandstanding between post-Soviet holdouts and the West. Russia’s ideologue Alexander Dugin advocated that Russia should give nuclear weaponry to North Korea as the last refuge of communism. North Korea recently threatened to “blow up” the White House, the Pentagon and other US targets.