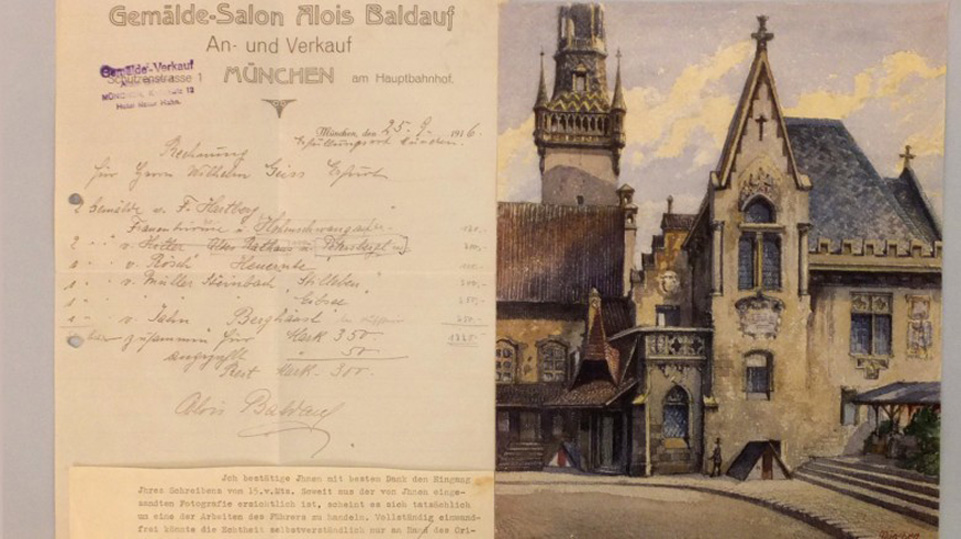 A watercolor painting of Munich’s old city hall, which is believed to have been painted by Adolf Hitler in 1914, has been auctioned off for $161,000 at an auction in Germany to an anonymous buyer from the Middle East. The painting is entitled “Standesamt und Altes Rathaus Muenchen” (Civil Registry Office and Old Town Hall of Munich). It was sold at the Weidler auction house in Nuremberg, the site of the post-war Nuremberg Trials in 1945 and 1946.

The watercolor painting was sold along with the original bill of sale and a signed letter from Hitler’s adjutant, Albert Bormann. The text of the undated Bormann letter states that the art in question appears to be “one of the works of the Fuehrer.”

Before he became a Nazi dictator, Adolf Hitler was an aspiring artist, with ambitions of becoming a famous painter. In 1908, Hitler moved to Vienna to continue pursuing a spot at the Academy of Fine Arts. He was rejected not once, but twice. In his autobiography, ‘Mein Kampf’, Hitler wrote about his hopes of becoming an artist being dashed by repeated rejection by Vienna’s Academy of Fine Arts. After the second rejection, Hitler blamed a Jewish professor for his failure as an artist. Hitler had said it was in Vienna where his anti-Semitism took root. In the meantime, the would-be Nazi leader was making ends meet by painting watercolor scenes of the city. In discussing the auctioned-off watercolor painting, Kathrin Weidler, director of the auction house, told the Associated Press: “It’s perfectly well done, but I’d rate its artistic value as fairly minimal.”