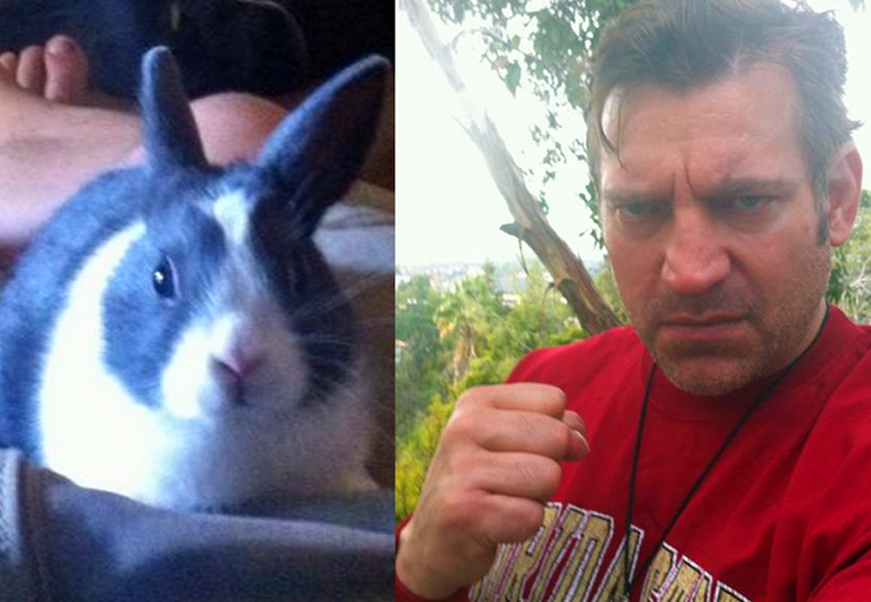 Hollywood actor Dimitri Diatchenko portrayed Russian villains and tough guys in “G.I. Jane,” “Indiana Jones and the Kingdom of the Crystal Skull,” “2 Broke Girls,” “Bones,” “How I Met Your Mother,” “Sons of Anarchy,” “General Hospital” and many other film and TV productions. He recently decided to play the bad guy in real life. On December 9, 2014, Diatchenko was criminally charged with killing his female roommate’s pet rabbit and threatening to do the same to her.

In a scene reminiscent of “Fatal Instinct,” Dimitri Diatchenko skinned the bunny, Ella, whom he previously described as his roommate and “the chillest rabbit” ever. Last Sunday, bunny Ella became the innocent victim in the falling out between Diatchenko and his former girlfriend, Amie. After the pair stopped dating, they continued to live together. However, when Amie wanted Diatchenko to move out, he took it out on her pet.

According to the criminal charges, after skinning the bunny, Diatchenko cooked it and ate half of it. He was sadistically sending step-by-step pictures of what he did to his former girlfriend. When Amie returned home, Diatchenko threatened to do the same to her. Deputy District Attorney Lou Holtz said that Dimitri Diatchenko is facing two felony charges: cruelty to an animal with use of a knife and criminal threats. Charging documents state that the actor “unlawfully, maliciously and intentionally skinned, killed, cooked and ate his girlfriend’s rabbit.”

If convicted, he is facing a possible maximum sentence of four years and eight months of incarceration. Diatchenko’s arraignment is scheduled at 8:30 am on December 30, 2014 in Department 100 of the Los Angeles County Superior Court, Van Nuys Branch. At the arraignment, the prosecutor will be asking that bail be set at $90,000.