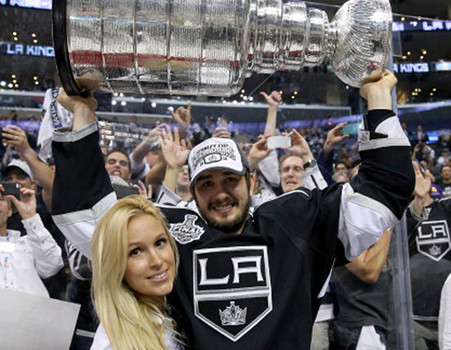 The government alleges that during an argument at the couple’s Redondo Beach home, Voynov caused his wife to suffer injuries to her eyebrow, cheek and neck. The injuries were serious and required medical attention at a local hospital, where Voynov brought his wife for medical treatment and was subsequently arrested.

Even after the felony charge was brought forth, the case remains under investigation by the Redondo Beach Police Department. If convicted as charged, Voynov faces a possible maximum sentence of nine years in state prison. He is a citizen of Russia and may be deported from the United States by the Department of Homeland Security, if convicted.

Voynov will be paid during the National Hockey League’s investigation but is barred from team activities. Last October, Colorado Avalanche goalie Semyon Varlamov was arrested for domestic violence, but charges were later dropped, because prosecutors said they could not prove the case beyond a reasonable doubt.

Voynov’s criminal lawyer, Craig Renetzky, asserted that “there was no crime here,” blaming the language barrier for the misunderstanding. Both husband and wife are Russian and their command of English was not sufficient to clearly describe the incident to the authorities. Voynov’s attorney states that his client never hit his wife, attributing her injuries to an accident. Marta Varlamova does not want to pursue a case against her husband and doesn’t plan to testify, according to her attorney, Michael Walsh. She does not consider herself a victim. Prosecutors could pursue a case without her cooperation, but under state law, they cannot force Varlamova to testify against her husband. To date, no one from the District Attorney’s Office has spoken to her. Varlamov will be arraigned on December 1, 2014 in Department 4 of the Los Angeles County Superior Court in Torrance.