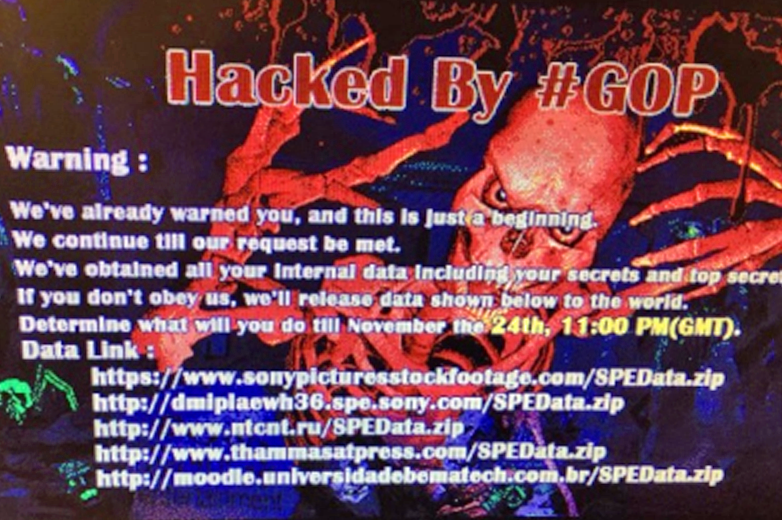 Sony Pictures Entertainment said its computer system is still down as of November 25, 2014, for the second day in a row, after a major hack paralyzed the computer systems of the film and television studio. The Amazing Spider-Man couldn’t help the staff of Sony Pictures, when they tried to log on to their computers and were greeted with an ominous warning. An image of a red skeleton appeared on the screen under, along with messages “Hacked By #GOP,” reportedly short for “Guardians of Peace,” and a list of threats. The warning said: “We’ve already warned you, and this is just a beginning … We’ve obtained all your internal data including your secrets and top secrets … We continue till our request be met … If you don’t obey us, we’ll release data shown below to the world.” As a precaution, Sony’s computers in Los Angeles were shut down, while the corporation is attempting to deal with the breach.

On day two of the hack, Sony’s bicoastal staff is unable to log on to the company’s computers or access corporate email. They’re now reportedly using old-fashioned pen and paper to complete assignments, while taking calls on landline telephones and sending faxes instead of e-mails.

Sony, the media giant behind movies such as “The Amazing Spider-Man 2,” doesn’t have the best reputation concerning their treatment of the company’s workers. Persons identifying themselves as the hackers who took down Sony Pictures’ computer systems say that they want “equality,” but “Sony doesn’t.” They are also suggesting that Sony employees aided in the hacking attack. The exact goals of the hackers remain unclear.

Sony’s cyber-attackers leaked a large ZIP file, detailing the extent of the materials obtained from the Sony Pictures finance department, including Excel sheets and ZIP files with passwords. A number of Sony-related Twitter accounts also appear to have been breached. Citing an unnamed source at Sony Pictures, media outlets report that the situation may take up to three weeks to resolve.

This isn’t the first time Sony’s systems were hacked. In 2013, a 25-year-old hacker with the group known as LulzSec was sentenced to a year in prison and ordered to pay $605,663 in restitution for an attack on Sony Pictures computers that began in late May 2011.

A recent report from the consulting firm PricewaterhouseCoopers estimates that more than 117,000 cyber-attacks hit businesses each day. The scale of the impact rarely comes close to the paralyzing blow dealt to Sony. Social media is abuzz with speculation and company employees worry that the system could be down for days or weeks.